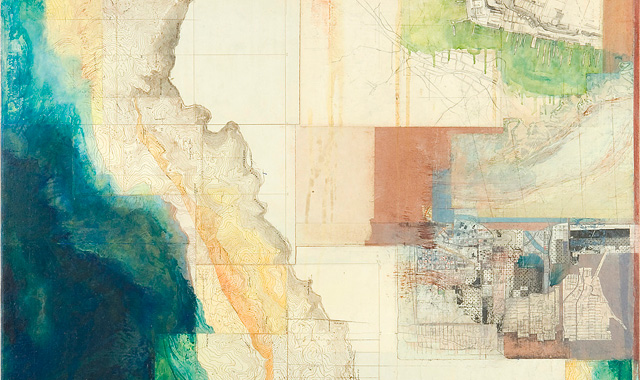 In an observation regarding humankind’s cerebral relationship to the landscape, controversial author Salmon Rushdie once stated, “we will, in short, create fictions, not actual cities or villages, but imaginary homelands, Indias of the mind.” Many have cited the interconnected discourses of art, environment and human perception. Indeed, artistic practice is analogous to the landscape itself — with the sprawling land of Western lore comparable to a modernist canvas. In her first freelance curatorial project, New Topographies, Altered Landscapes and Other Identities,art historian Laura Hurtado uses the work of Adam Bateman, Steven Larson, Leah Moses, Jared Steffensen and Mary Toscano to explore this complicated terrain.

The exhibition’s venue is seemingly unusual, but Pinnacle Performance, an acupuncture and physical therapy studio in the Sugar House neighborhood of Salt Lake City, holds an interesting affinity for art. Before launching the space’s second identity as a home for art exhibits, Pinnacle’s owner Amy Broekemeier elicited advice from friend and art enthusiast Larry Schumann. Inspired in part by his daughter Stephanie Schumann, an art historian and curatorial director of Leo Koenig Gallery in New York, Mr. Schumann assisted Broekemeier in her search for a curator for the inaugural exhibit. Due to her previous curatorial position, Hurtado came highly recommended by former Utah Museum of Contemporary Art (UMOCA) director Adam Price.

Hurtado has been involved in the Salt Lake Valley art scene for a number of years. Before becoming the Global Art Acquisitions Specialist for the LDS church, she worked as the Acting Curator of Education at UMOCA. With this exhibit, Hurtado was determined to supercede what she calls the ‘stereotypes of a landscape show’ by considering the land as a psychological force, rather than merely a subject. The exhibition’s title reveals her process of expanding this vernacular. Consequently, the landscape becomes a conduit to investigating the more complicated issues of cognitive and phenomenological interaction with space.

The exhibition investigates the connotations of topography — flatness and objectivity — which appear contrary to the illusory, subjective and personal projections that form our deep emotional attachment to the environment. Continuing this sentiment, Hurtado explains that the show, “fully [realizes] that the western land has never been the blank canvas once imagined, [as such] these five contemporary artists’ works continually reflect and investigate the utopic and dystopic fields of vision.” What emerges is an imaginative array of artistic statements regarding landscapes –ranging from ethereal to vivid — that problematize our previous connotations to the subject. 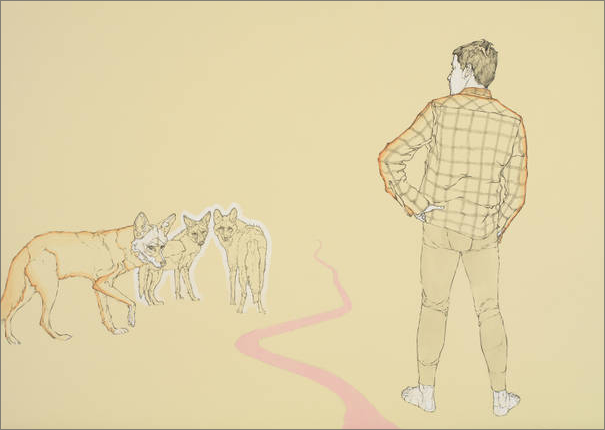 Steve Larson’s work engages topography by using maps as a template for modernist abstraction. His works, where the messiness of paint alters the clarity of calculated places, attest to the misleading objectivity of maps. Thus, we could say that humankind’s imaginative urge to romanticize places inevitably changes their reality. Countless places exist on an invented plane of topography. Places that only exist on maps call upon our imagination to invent their identity.

While Larson’s topographic intervention is literal, the work of Mary Toscano reads as more of a humorous invasion. Her lively drawings evoke humankind’s emotional attachment to animals –yet undermine the sentimentality perpetuated by popular culture. As such, her works appear simultaneously pleasing and ambiguous, inviting multiple interpretations. 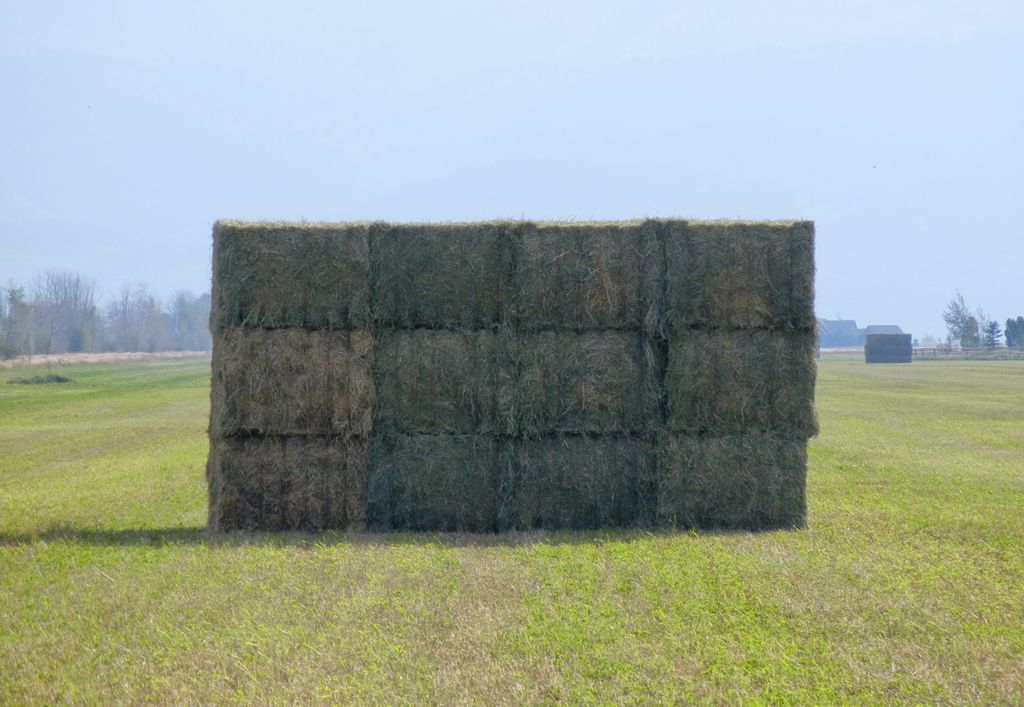 In looking for subjects in the landscape that resemble minimalist sculptures, Jared Steffensen, who has worked as a Preparator at the Utah Museum of Contemporary Art, looks for works that are slightly asymmetrical.

Jared Steffensen describes his included photographs as ‘readymade minimalism.’ Building upon the Minimalist language of the mid-1960s, Steffensen discovers basic geometric forms in nature. Hurtado describes this process further by stating, “the land then, for Steffensen, is continually informed by the language of sculpture and through its lens, peppered here and there, ever so subtly, in the vast middle of nowhere.”

Leah Moses’ large multi-media works adorn the entrance of the exhibition. The artist’s process is one of patience and precision. As Hurtado puts it, for Moses, “process becomes concept,” as the artist creates long sheets of delicately handmade paper made. The paper is created from collected materials — grasses that have been accumulated in a variety of locations from Salt Lake City’s mountains to India and the Philippines. The gently flowing fabric drifts down the canvas in a delicate and haunting manner. Thus, Moses’ ethereal works draw from the idyllic materials of travel and imagination. 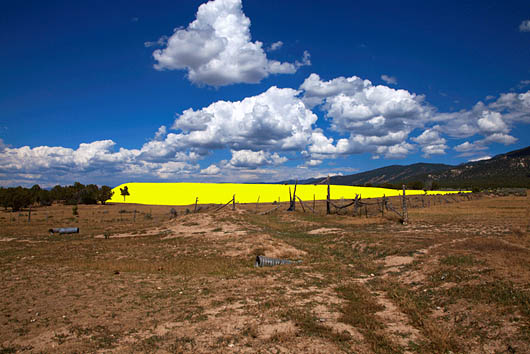 In Adam Bateman’s photograph the landscape in central Utah is transformed when a uniform swatch of canary yellow replaces an earthen dam.

Adam Bateman’s photograph “Pigeon Hollow Dam” depicts a desolate environment in Sanpete County. At first glance, a jarring yellow pierces through the image. With closer inspection, we detect that the yellow plane compromises the dam’s water. The flatness of the yellow forces viewers to re-assimilate themselves with the landscape. The otherwise lackluster and quiet environment is suddenly pierced with abstraction — which to Hurtado, “reveals just how the Utah pastoral landscape is a man-made construction.”

One of the benefits of art is that it forces us to reevaluate historical stereotypes. For Utahns, state identity is rooted in the mythology of the American West. The pioneers of the nineteenth century are continually revered for inhabiting Utah’s rugged and uninviting environment. For them, we can imagine that every facet of the land was scrupulously investigated, charms and frustrations simultaneously accounted for. New Topographies, Altered Landscapes and Other Identities confronts the cognitive and phenomenological origins of such stereotypes. Thus, the goal for artists should not be to exalt the picturesque Western landscape as historically static, but instead relish in the dialectic of space and how it continues to shape our consciousness.