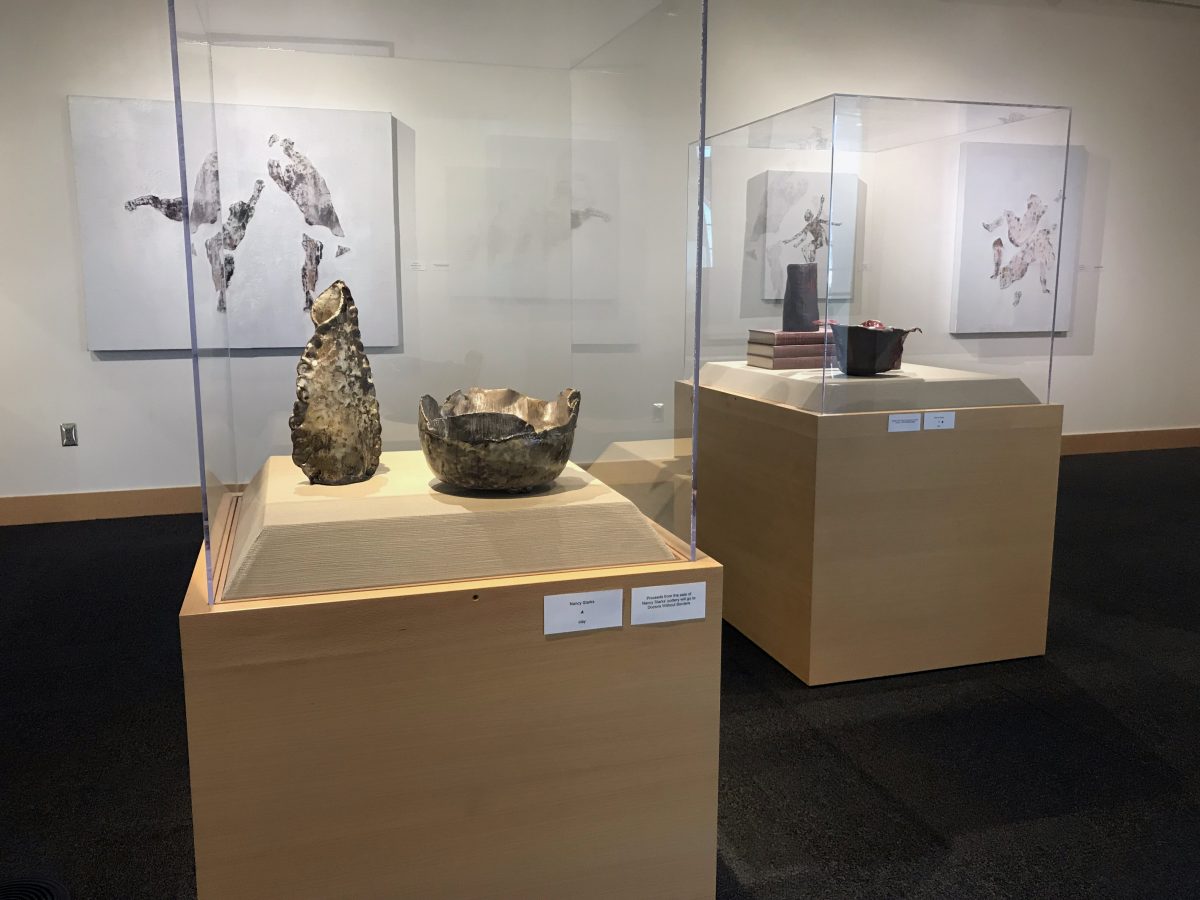 While the two exhibits that hung together in The Gallery at Library Square during the start of 2019 offered a thematic comparison of nature and its elements as found in the works of Lisa Anderson and Susan Makov, the two shows up through April 26, by Nancy Starks and John Sproul, are memorable instead for the ways in which they contrast but still serve to enhance each other.

There’s a refreshing yin-yang shift going on with the current work in the gallery of flat pieces hanging opposite and amid 26 rounded and elongated vessels — one that occurs , too, in the backstories and intentions of the artists: a first showing of pots for her; yet another of many for him; she maneuvers the clay she uses into forms while he is fascinated with the body “and what its language tells about all of us as a whole.” It is his endeavor, he writes, “to push against the lines that divide the tangible from the intangible.” 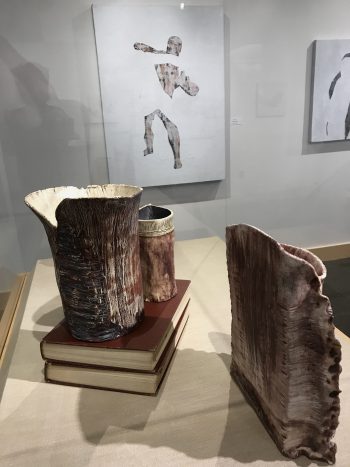 On the walls, the contemporary gestural figures of John Sproul, presented in 20 acrylic works of varying sizes titled An Underness of Being, contrast sharply with the formal (occasionally edging on funky) hand-built pottery of Nancy Starks — lovely stuff that can, with its frilly or fringed edges, look like it arose from the sea, showcased in a manner somehow reminiscent of richly appointed British high teas nestled in understated Japanese gardens.

Starks rejected the proffered Plexi risers (inevitably used for display purposes at this gallery), considered her work well, then brought up from the bowels of the building — where she volunteers for the Friends of the Library’s Amazon area — some impressive, sizeable-but-skinny matching leather-bound tomes to stack at varying heights and thus show off her work, leaving some pieces sitting flat on the base. The result is simple perfection under glass, like viewing treasure trove underwater.

Roll, Fold, and Pinch is Starks’ first show of pottery and first library exhibition. Sproul, whose work focuses on human body language and how it connects us, has shown at the library on several other occasions as well as in numerous area galleries and has a 25-year professional history of solo, two-person, and group exhibits that stretches through Utah, across the United States and also through parts of Europe and Malaysia.

Not that Starks has been idle in the arts: for nearly 50 years she has created stained-glass windows and lamps on a commission basis in our state. Most of her windows are in private homes, but a few can be seen in public places such as Centerville’s library and Church of the Resurrection; Congregation Kol Ami (a Salt Lake City synagogue); Rowland Hall School; and Sprague Branch library in Sugar House. And in 2013, Starks exhibited her lamps alongside and attached to at least one of the creative welded steel pieces made by her artist husband, David Starks, at the Art Barn in a delightful, artfully crafted and wickedly titled show, On the Light Side.

Though Starks says there are “few arts and crafts in which I have not worked and played,” her serious connection with clay began at the Sandy Senior Center only after she retired from teaching (at Madeleine Choir School and Rowland Hall) in 2005. She was looking for an activity for her sister, who was developing dementia but had studied under Dorothy Berenson at the University of Utah and was a good potter. “She found the class frustrating more than anything, as it turned out. Her husband, Ty, and I just loved it. So we kept going.” 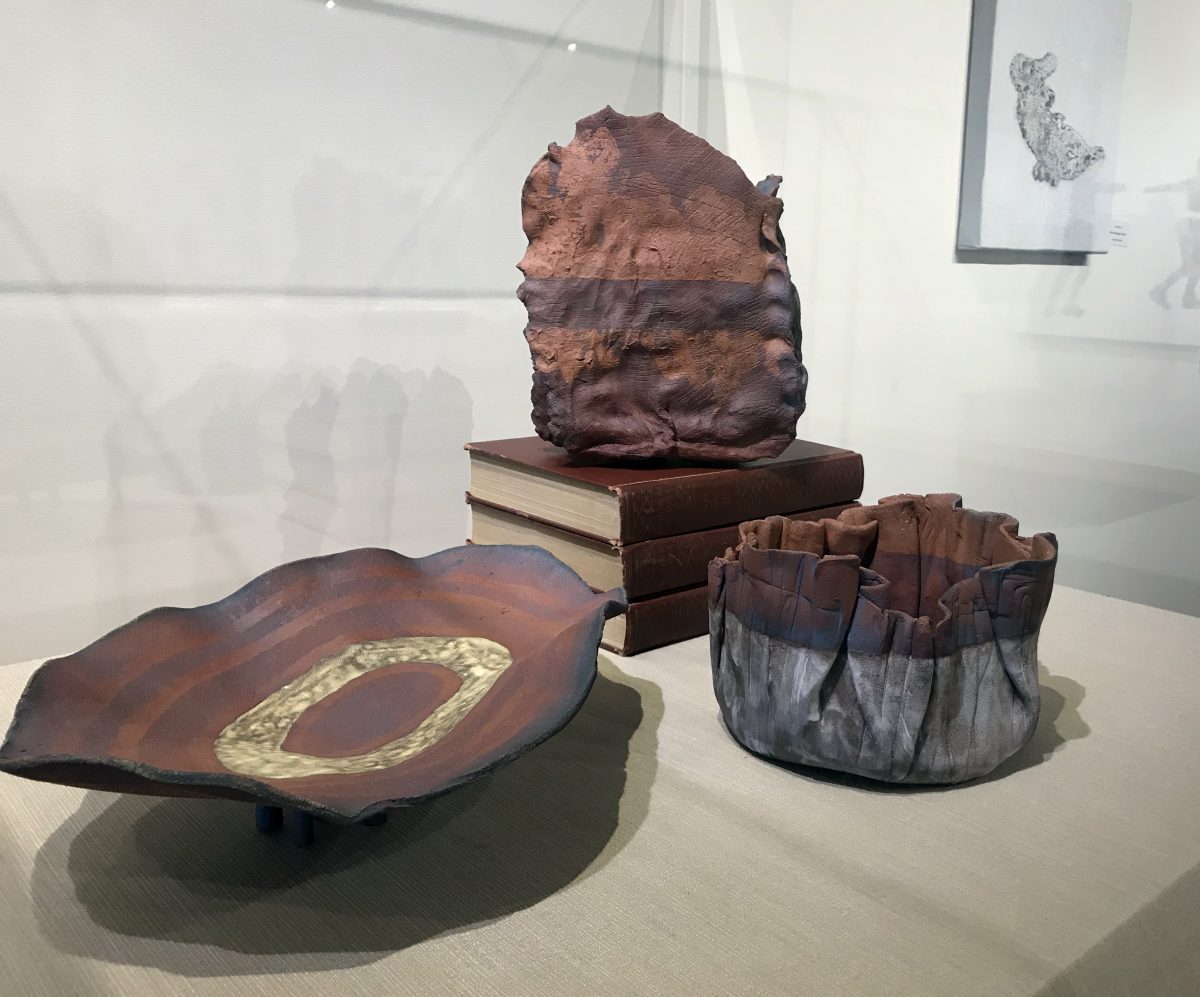 She typically uses just a solution of iron oxide and different colors of clay and scratches designs into her work, tipping it upside down and allowing the oxide to run into the rivulets to create the depth she achieves in tone. “I’m getting more into color, though,” she says.

“My works are hand-built as I enjoy finding the limits of this medium as I roll, fold and pinch it into sculptural forms,” Starks writes in her artist statement. “The natural textures and colors of the clay are used in my work to create organic and irregular shapes. I want my pottery to reflect the process of its creation … as if it is still emerging from the lump of clay I began with.”

She is selling the work to benefit Doctors Without Borders. “Unlike most artists, I don’t need this money to survive,” she says. “Doctors Without Borders goes as a team into any desperate area of the world and does what needs to be done. It was to them or UNICEF, “ she says of her beneficiary. Though she “admits” to holding back three pieces for herself, the pottery sold so fast that Starks didn’t have time to red-sticker one other work she really wanted to keep —a tall, wavy, white piece that’s “great with gladiolas.” 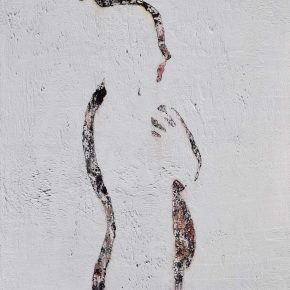 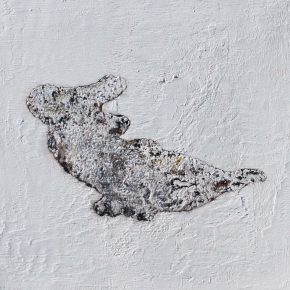 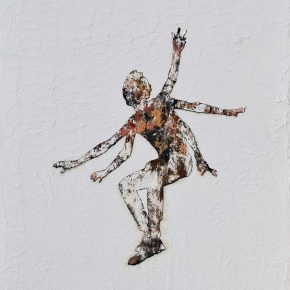 You might have seen John Sproul’s distinctive work at Finch Lane, CUAC, Kimball, Springville, Michael Berry, Rose Wagner or even at Nox Contemporary, the project-oriented, noncommercial art gallery he owns in downtown Salt Lake City. It was fascinating to type his name on the search bar that’s at the top of most every 15 Bytes page: up pops a photographic studio tour from 2009 by editor Shawn Rossiter that shows clearly on an easel an early conceptualization of the strong figure pairings Sproul still creates a decade later, only these are fully drawn and colored in. You also will find some typically strong reviews of Sproul’s shows by our oft-quoted art critic Geoff Wichert — this writer copied out a portion of one a couple years back to reference as an example of superb art writing: “The first thing the eye should seek is the promise … that there will never be a final discovery — an end to visual ravishment and the metaphorical unraveling that accompanies it. John Sproul’s figures make that promise. Whether the surface of a given pair of figures initially suggests the disintegration of a single membrane, or the bubbling turmoil of seething, multicolored layers, and regardless of what significance is ascribed to them or not ascribed to them in any other cerebral medium they might inhabit, whether they are splotchy or veined like marble, or if they are dripping, oozing, fur-like, or crusted, whether they seem to be airborne like gossamer or standing heavy on the densest plane, they will never surrender their ability to intrigue the senses and bewitch the mind.  Surely it is this blend of sense and sensibility that lifts works of exceptional craft to the special place of art.” No point in attempting to best that, go read it all here. 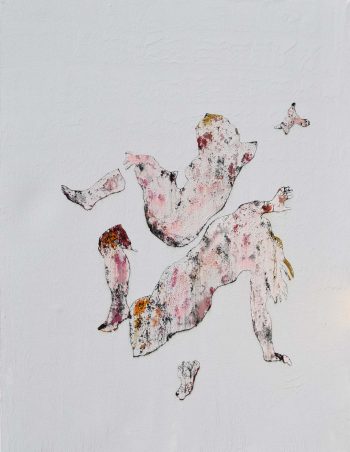 Interestingly, with his work created over just the past year that he shares with us in the current library show, Sproul has moved beyond the relative ease of the in sync pair, of the couple (though they are here, in confrontation, in balance, in the dance of body language that is essence to this artist), to focus more than occasionally on the soliloquy of the individual figure — sometimes fragmented and torn apart like a sensuous paper doll; folded over itself still as a crustaceous mermaid; or appearing as the outline of an expectation; sometimes jumping high, twirling about in a frenzied pinwheel of motion, “a body multiplied within itself,” as Sproul says — but always, always communicating. It’s all quite something to absorb.

An Underness of Being, Paintings by John Sproul, and Roll, Fold and Pinch, Pottery by Nancy Starks, Gallery at Library Square, Main Library, Fourth Floor, through April 26.