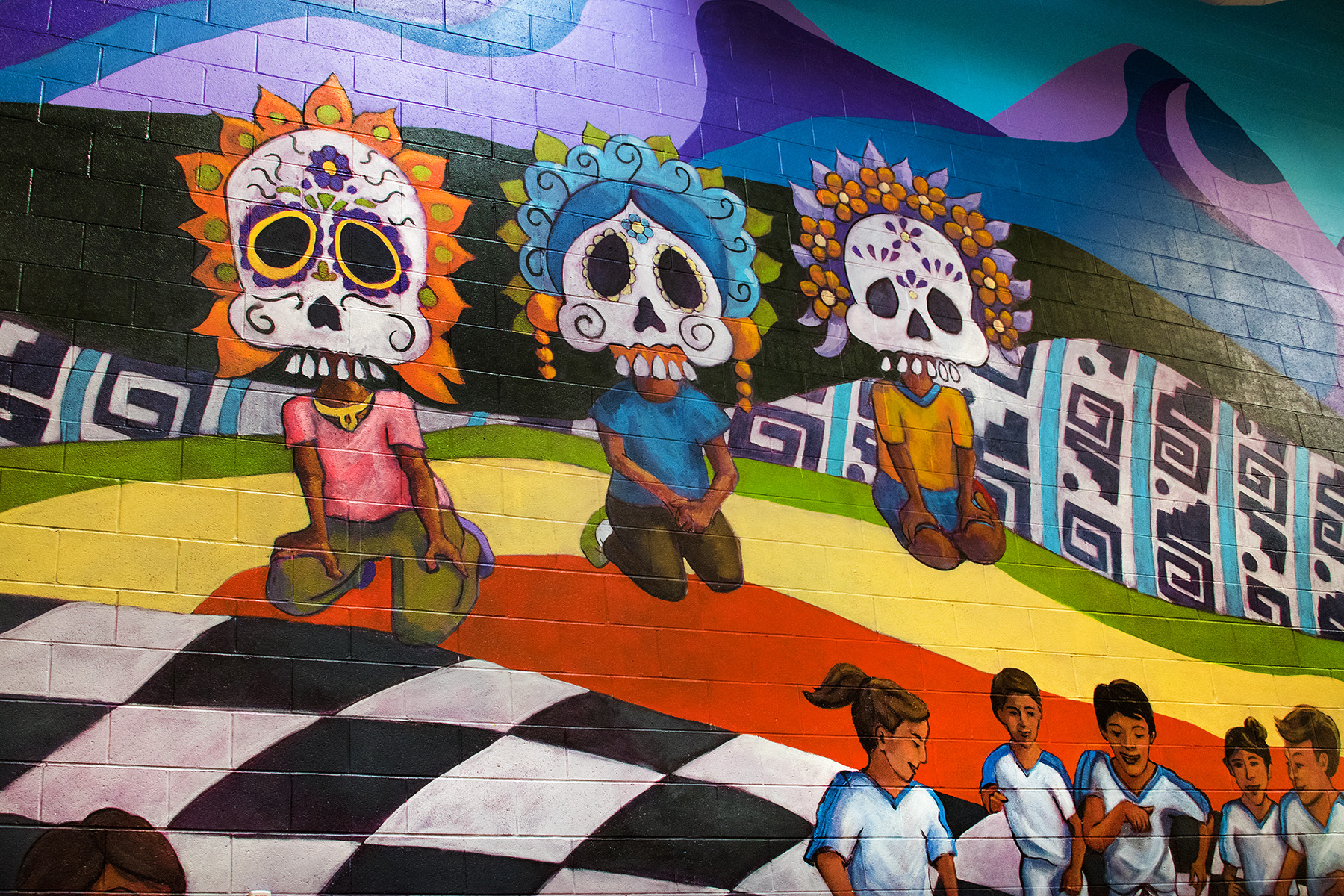 A massive and meaningful mural created and painted by University of Utah Professor V. Kim Martinez and 11 of her art students was unveiled Dec. 11 at Esperanza Elementary in West Valley City.

The 1,500-square-foot work, titled “Lenguaje de Esperanza” or “Language of Hope,” incorporates figures from diverse cultures (Esperanza has a nearly 98 percent Latino student body); sugar skulls (the kids enjoy Day of the Dead activities); mariachi bands (every child learns to play an instrument for the school’s band); chess; soccer figures; mountains; sunflowers; folklorico dancers – a “tapestry of cultural narratives,” states a U news release, reflecting the “curricula, identities and loves of the students.” 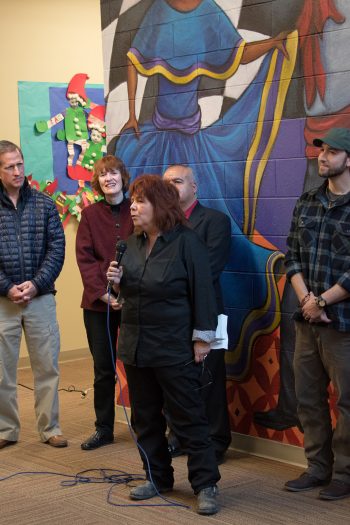 Martinez says her own class first helped with getting grants for the project, then focused on what was important to the kids. “I mean, they didn’t paint with us, but a couple of the teachers did. And the teachers and children gave us their opinion. Parts of the mural opened up a lot of dialogue with the youth,” she remembers. ”The mural reflected the student part of the community.”

It all began about two years ago when a board member contacted Martinez to meet with Eulogio Alejandre, principal of the Title I Language immersion Charter School, to help integrate art into the building, located at 4596 W. 3500 South. “I never wanted to be in a school that tolerated culture,” Alejandre says. “I wanted to be in a school that celebrated culture. With this mural, we are letting kids know that their culture is valuable.”

The project is part of a class offered every year by Martinez that focuses on the public politics of art. Last year her students did an enormous outdoor mural at Our Lady of Lourdes Catholic School in Salt Lake City. “There is an impact on the community we are working in and also on the U class we are working with,” she says. “We are creating a dialogue between the U and the community, along with encouraging artists to become invested in public funding projects and the myriad processes those projects entail. But most importantly, the class allows students to experience first-hand how art impacts and benefits the lives of people who, at times, feel excluded from the artistic community.”

The Esperanza mural is really a glaze painting, says Martinez. “That wall was painted five different times. It started with a grid, then a chalk drawing, then a blue line, then the final color in acrylics, then the mid-tones, then the highlights. We use a polyangular perspective — multiple points on the horizon line that touches a person’s heart. When a mural is so big, if you only had two points nothing would ever be in focus. We are making the viewer constantly move.”

Martinez emphasizes that she is making art to create social justice. “Muralism,” says Martinez “can be something that is timely and will last between five to 15 years. I am trying to teach [my students] that they can change the world through art. Some of these kids had painted murals before, but mostly with spray paint,” she adds with a laugh.

She also is trying to bring in the traditional Mexican muralist art she studied with UCLA Professor Judy Baca – famed for the “Great Wall of Los Angeles.” Baca was greatly influenced by David Alfaro Siqueiros who, with Diego Rivera and Jose Clemente Orozco (the Three Greats) established the Mexican Mural Movement starting in the 1920s. Baca traveled to Mexico to study at Siqueiros’ studio with others who passed down what they had learned from him before he died in 1974. This she passed along to Martinez.

It is Martinez’s personal viewpoint that “art is a right, not a luxury.” She adds: “I am a painting and drawing professor. I do easel painting, too, but this meets an entirely different set of needs for me. It provides an opportunity for me to work collaboratively with community and students to create art that impacts viewers on a daily basis.” 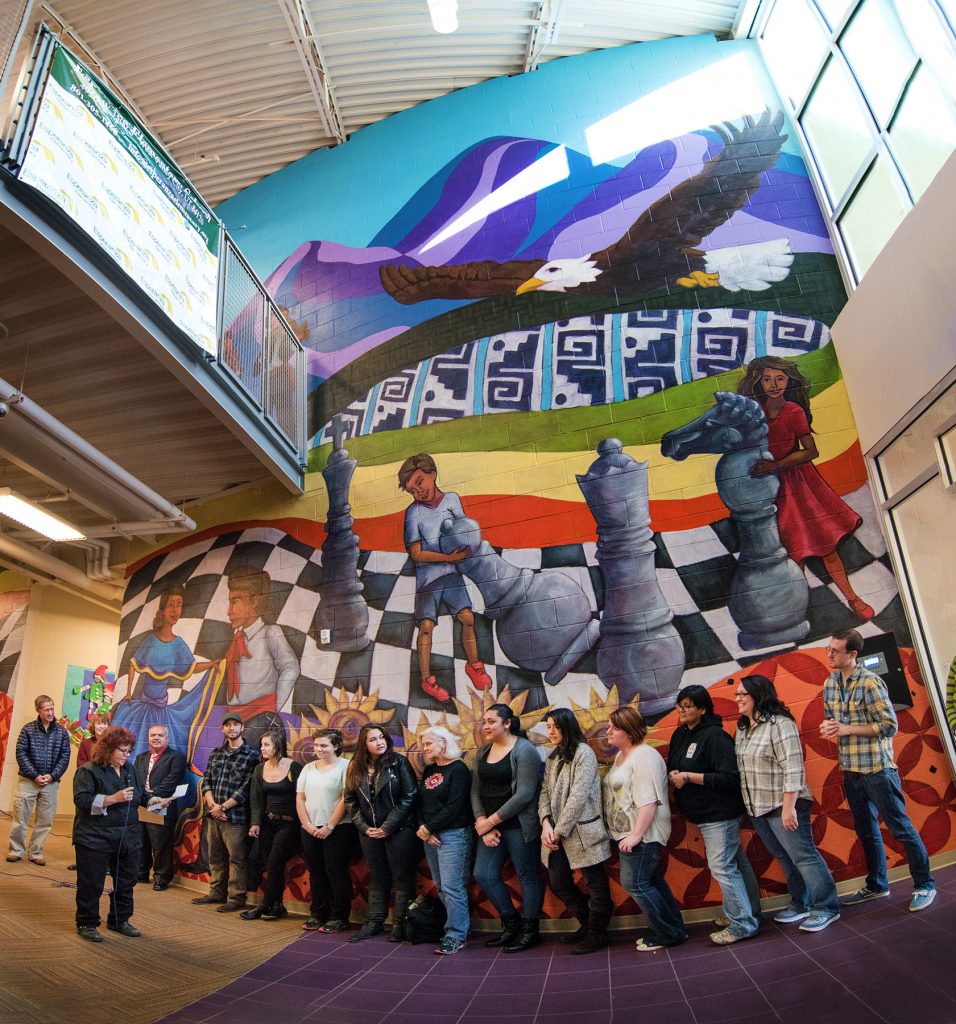