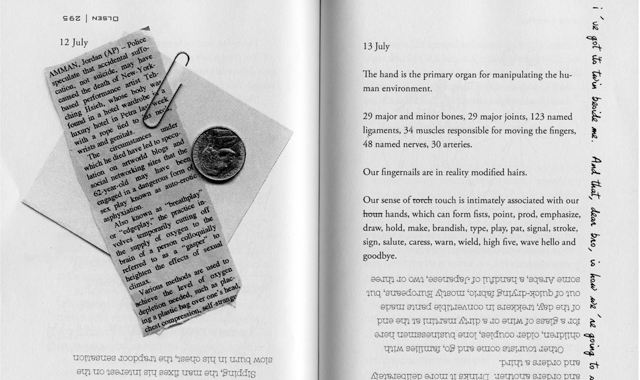 For fans of experimental or metamodern fiction, Lance Olsen is a well-known name. He has published over twenty volumes of fiction, essays, and “anti-textbook” work, with another forthcoming. There are few writers working today who are more prolific, inventive and as simultaneously micro- and macrocosmic in scope as Olsen. In his twelfth novel, Theories of Forgetting, he guides his long-running, cross-genre experimentation with fragmentary and disintegrating narrative into new territories preoccupied with both the nature of memory and the materiality of language and books.

At the most basic level, Theories traces three separate narratives — the attempts of a middle-aged filmmaker named Alana to finish a final film about Robert Smithson’s earthwork, Spiral Jetty, before she succumbs to a mysterious epidemic known as “the Frost;” the story of her husband Hugh’s disorientation and bewildered travels following Alana’s death, which culminates in his seeming kidnapping by a cult that worships barbituates; and that of their daughter, Aila, who is annotating her parents’ journals and documents, partly as a means of exploring the disappearance of her brother, who seems to have disowned the family at some earlier time.

We meet Alana in the early stages of her disease, when she writes

Something is happening to me.
I wasn’t sure at first. Now I am. A glary gray migraine
Aura. A sheet of plastic lowering between me & me.
The same sort of feeling when you suspect the flu has begun
Scattering through your bloodstream:…

Alana’s narrative commences via journals that take the form of mixed media entries of text, photos, and clippings made as the Frost slowly robs her of writing, syntax and conventional temporal sense. The documents pasted into her journals shift perpetually amongst a myriad of themes, from x-rays and constellation maps to photos of the Jetty or of Smithson with his wife, Nancy Holt. There are even photos we can infer to be of Alana and Hugh during their travels, though they are actually of Olsen and his wife, Andi, only one of many instances of blurred history and fiction within the story.

Hugh is initially a mystery, a man repeatedly breaking and entering a house (and complicating seemingly simple domestic tasks) that he once owned and which we find out he later abandoned after Alana’s death. Early on, he finds himself again in the house where

This thought happens to him and the man
hears someone take a quick breath across the room
and he raises his head: a stranger  suspended in the
doorway between the hall to the bedrooms and this
place, the one the man finds himself occupying

The phrase “stranger suspended” is an apt description of Hugh in general. Shortly, after this incident, he disappears into the limbo of travel, which only further confounds his loneliness, and finds himself in Jordan on a Quixotic search that leads to a final disorientation.

Meanwhile, Aila appears entirely through blue, handwritten marginalia on each of her parents’ narratives which alternate between deeply personal remarks to her brother such as “Their trip of a lifetime, which makes me think: did you ever feel, if even just a little, that they held us responsible for never being able to take another” and literary or theoretical commentary ranging from Baudelaire to Baudrillard.

For all the unsettling, lyrical beauty of these three overlapping stories, it is impossible to deny that the form of Theories of Forgetting acts as one of its main, if not the main, characters. The question of how to approach the book itself will likely be the first to confront most readers. The covers of the book — which are designed like the rear covers of most texts, with the telltale author photo, blurb, and synopsis — are identical, though one is upside-down. The formatting of the text itself is similar in that each page is split in two (though not always in half, suggesting a method of emphasis/forgetting at times) with part of the text upside-down on each page. Depending on which way the book is turned, the reader is confronted with either the text of Hugh’s story, or the mixed media of Alana’s, resulting in two 367-page “books,” a contested term here for sure.  And in either case, many pages are further framed by the sometimes parallel, sometimes perpendicular annotations made by Aila. As a result, the reader is forced to constantly turn the book in their hands to access all of the text.

For me, the form of Theories generated two experiences that were key in thinking about not only how we read, but also how memory shapes our ability to read and contextualize. The first was trying determine how to actually read the book. Do I read one “side” of the book straight through, and then the other? Do I alternate between them? And to what degree? Or do I just continually turn the book around from page to page and thus move forward and backward through the signatures simultaneously?

Of course, this is all further confounded by Aila’s notes, which can seem to refer to either story, depending on the page. I finally settled on a rather arbitrary system of reading 16 pages of each narrative at a time (a geeky sort of homage to the materiality/binding of the book), though this system quickly disintegrated into completely arbitrary forays between the two layers.

Likewise, it is all but impossible to ignore the opposite story coming and going on the pages read and to be read, particularly in the case of images, which are frequent in Alana’s narrative. The result is a kind of mnemonic or oneiric residue or precipitate that is inescapable. We cannot forget that as separate as the two stories are — formally, temporally, stylistically — they are ultimately inseparable due to the relationship(s) that constitute each.

All the turning and manipulation the book asks of the reader, and the moments of reflection and perplexity it allows, is emblematic of, and parallel to, tensions entangled in the text that are best reflected in the presence of the Spiral Jetty itself.  Alana notes during one visit to the site

We approach the [Spiral Jetty] with our visual expectations
already askew, already thrown into tao

and so we experience it without convention—or, closer to
the point, with the idea of convention always bracketed,
always foregrounded precisely in its contingency and insta-
bility.

Here the Jetty and the Frost vie for control of language, throwing Alana in and out of “convention,” of coherence. The Frost not only slowly extinguishes Alana’s syntax and vocabulary, but also plays with the reader through her attempts to correct herself, as in this passage in which she eliminates both the identifiers of place and, via the “tao/doubt” interchange above , the “way” in or out. Nonetheless, the Jetty remains a focus for all the characters in the text, posing as an instrument of both centripetal force (Alana’s turn inward) and centrifugal force (Hugh’s exile of himself from his old life and immersion in foreign travel). The spiral symbol appears again and again in the book, both literally and figuratively, be it in photographs of rock art or the idea of DNA sequencing and disintegration inherent to the family structure and its breakdown and to disease.

Olsen is clearly engaged with a tradition of ergodic literature here — the most popular example being Danielewski’s House of Leaves though this quality is most often associated with hypertext lit. But neither this nor materiality suffices  in Theories; he even brings in his own system of punctuation which, true to intertextual Olsen form, is only identified and explicated in another of his recently published books, [[there.]] (Anti Oedipus, 2014). Amongst the notations in [[there.]], is a nod to the quadruple colon (or perhaps it is a double-quadruple ellipsis) depicted as ::::, which is explained as “special punctuation for not being at home…for what cannot be articulated accurately.” Likewise, there is mention of the double bracketing mark [[  ]], intended “for what must be removed from the chronic to be experienced.” Such moments occur within Hugh’s literal travels following his wife’s death and the oscillation between suspended and mortally finite time in which Alana’s final months play out.

Regardless of the direction of the spiraling, it is ultimately time that takes priority here. Be it deep, geologic time or the span of a human life, both the Jetty and Theories of Forgetting serve as meditations
on being, and maintaining, the ephemeral. This is perhaps best summed up in Levi-Strauss’ notion of entropology, a term adopted by Smithson to explain his own process. In a recent lecture, Olsen describes how, for Smithson, “entropology embodied structures in a state of disintegration but not in a negative sense, not with a sense of sadness and loss…[it] embodied the astonishing beauty inherent in the process of wearing down, of wearing out, of undoing, of continuous decreation, at the level, not only of geology and thermodynamics, but also of civilizations, and ultimately of the individual within them.”

There is astonishing beauty throughout Theories of Forgetting, both in its text and in its form, in its disintegrating archives and its insistence that choices be made, momentums potentially altered. It moves and makes us move. It makes demands both physically and intellectually. Perhaps most importantly, it affirms the materiality of the book at a time when the numbers of digital publications are surging. However, Olsen, whose own interest in hypertext and other digital forms is well documented, does not offer an admonishment in Theories, but rather an alternative and complementary means into a text. It is something akin to travel or the questions Alana asks of herself, and perhaps unknowingly of Hugh

Which direction will he go now?