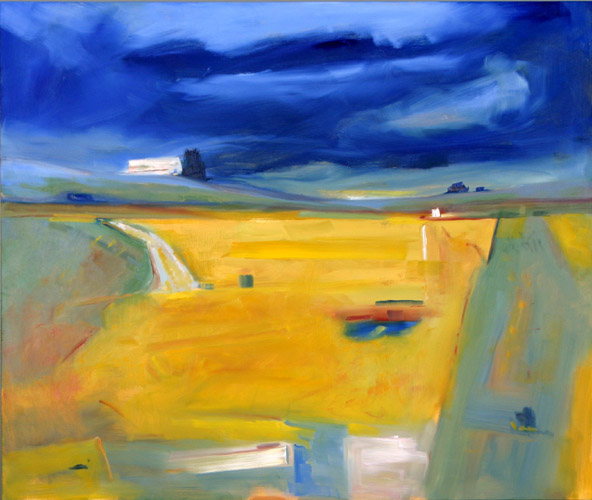 Being the gentleman that I am, I’ll begin with the ladies first. And if I call a certain group of ladies now showing at Patrick Moore Gallery “broads,” it is not because my standard of gentlemanly conduct has suffered any impairment from opening too many spring-loaded doors; it is because “broads” is what they call themsleves. Good ole ones at that. 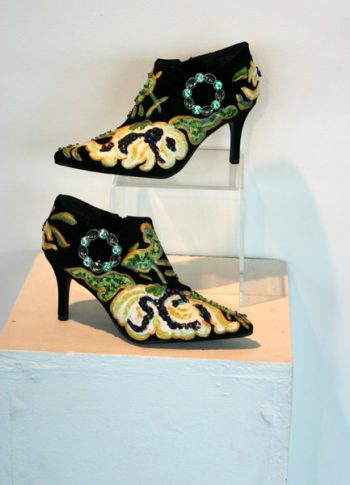 The “good ole broads” exhibiting together at Patrick Moore Gallery include a range of artists and artistic interests, from the modernist sculpture of Ursula Brodauf to the crafted shoes of Pilar Pobil, who is also known for her colorful paintings (also on display) and her wood carvings. The majority of the good ole broads make paintings, like the shimmering landscapes of Bonnie Posselli, the playful figure compositions of Dottie Miles, and the colorfully abstracted landscapes of Carole Evans. Edie Roberson has created a playful ensemble between her intricately rendered paintings of dolls and toys and found object assemblages featuring the same. You’ll also enjoy the work of Kathleen Deneris, Bonnie Deffebach, Timmy Burton, Marian Dunn, Woody Renzetti, Bernadette Velick and Kay Kuzminski. 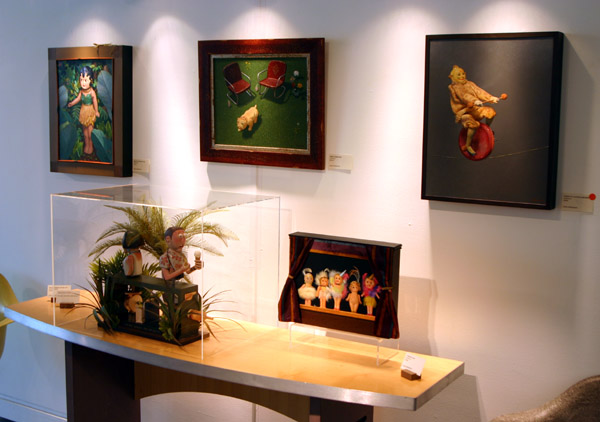 Walk across the street from Patrick Moore to the Utah Arts Council’s Rio Gallery, located in the Rio Grande Depot, and you’ll find even more women artists. The vessels, containers and swirling paint in Rounded Forms are appropriately feminine themes in this exhibition of three women. The gourd sculptures of Mary Hogue are a wonderful compliment to the contemporary sculpture of Heysook Cho. Both deal with a sense of interior and exterior while playfully questioning the dichotomy. Hogue grows her own gourds and carves into them, using botanical and Native American motifs, while emphasizing the natural shapes and blemishes of the gourds. Cho’s works are vessels that can be heavily opaque while maintaining a fragile sense of air and space. The most appealing aspect of her work is the surface texture, reminding me of the various surfaces found in Utah’s natural environment. An attention to surface is shared by Mary Street, the 2-D artist in this triumvirate, whose attention to impasto colored affects creates two dimensional paintings as fascinating as Cho’s sculpture. 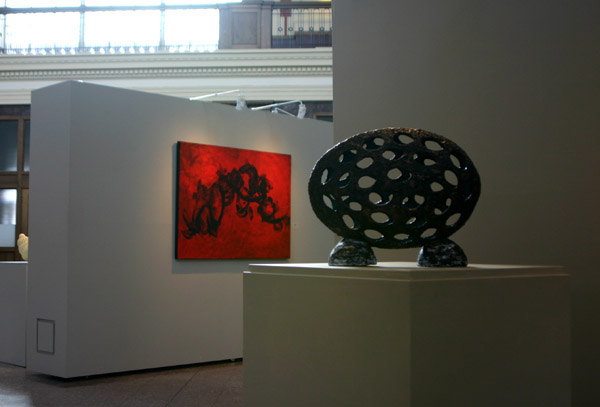 Lest you think that the Salt Lake galleries have given themselves up entirely to the x chromosome because March was Women’s History Month, let’s continue our stroll — yes, it is actually possible to “stroll” to some of the SLGA galleries — a block further over to the Pierpont area and Art Access Gallery. Here you’ll find an odd photography exhibit by Quinn Jacobsen. Odd not only because Jacobsen employs the wet plate collodion method — an early photography method abandoned before the turn of the century — but also because of the subjects in his photographs. To match his abandoned method, Jacobsen likes to show subjects who have been abandoned to the fringes of society. His method creates a very fluid print of larger than life portraits of various people. The two who stand out for me are a man pointing a pistol at his shaved head and another individual with a vice around his skull. Okay, there are also less threatening photographs and, well, Jacobsen doesn’t represent all of us y chromosomers anyway so let’s not start a conversation about violent video games and action flicks.

Combine the x and y in holy (or secular) matrimony and what you have is the couple exhibit, one of which you’ll find at Art Access next month. The artwork to be shown is the result of two artists working in tandem from the same setups over the last year and more. Brad Slaugh and Tracy Strauss have chosen to paint convergent views of people over multiple painting sessions in compact stage situations that they have set up in each of their studios. Check it out to see how differently two people who live together can see the world.

Can’t wait to find out what happens when two people share not only the groceries and the dishwashing but also the brushes and pigment? Satisfy your voyeuristic curiosity immediately by hopping in your car and heading up to Finch Lane Gallery for the exhibit of Clay and Rebecca Wagstaff. The Wagstaffs, who live in Tropic, are both accomplished artists, and the similarities in their work are as interesting as their differences. Clay is known for his rather empty vistas of central Utah, especially his iconographic poplar trees. Rebecca’s subjects, on the other hand, are found inside, in arranged still lifes, often featuring pottery and natural elements. Both artists, however, share a similar palette and an interest in detail, and if you look past the obvious differences of their subject matter, their paintings often share the same low-horizon, centrally focused composition. Sort of the way some people, after years of marriage, begin to look alike.

As long as you’re in your car (this is where Gallery Stroll should be called “Gallery Drive,”) you might continue your gallery trip south, stopping at Foothill’s A Gallery, where, if you hurry, you might be able to see the non-objective paintings of Emily Plewe before they are joined by gallery regulars for the Spring group show. 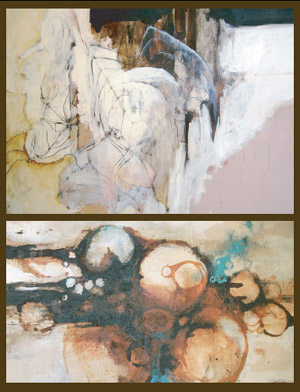 You’ve come this far, so you might as well keep moving, heading down the hill to the Sugarhouse area where you’ll find two exhibits within spitting (though as a gentleman I wouldn’t spit) distance of each other. The Maridadi Gallery, which occupies the space of the former One Modern Art and is part of an interior design firm, features the work of two emerging artists, Lisa Corrinne Von Koch & Jenevieve Hubbard. If you haven’t already figured it out by the artists’ names, the exhibition title — Oroboros & The Metempsychosis (Knocked Up & Knocked Out) — should clue you in that we are back to the x chromosome. But these are agressive females. Their paintings and assemblages have an energetic, layered quality to them that will shake up any passive viewer. 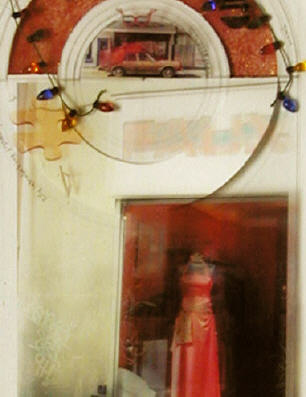 Two doors down, just past the Rockwood Studios, the Groutage Gallery is featuring the work of Steve Rasmussen and Chuck Parsons. Rasmussen has been the Costume Shop Director for the Ballet and Modern Dance Departments at the University of Utah for ten years. His work in textiles and his various travels have influenced his photography-based work. He uses handmade, hand-dyed and painted paper, natural and enameled leaves layered with his own silver, ink jet and photo-transparency prints in dimensionally configured framing. Featured in the show are recent works including the suite of 12, ‘les tres riches heures of lola hoople’.

Chuck Parsons, a Utah native, began working in ceramics twenty years ago. The past few years he has become interested in “alternative” firing techniques that forsake the use of glazes. Most of the pieces in this exhibit are made with a porcelain clay body and then pit fired or sagger fired. The technique creates unique surface patterns as a result of the pieces being fired in a “bed” of organic material including sawdust, leaves, salt, and various copper and iron derivatives.

Take a step back to the Maridadi and you’ll notice that, between the three-dimensional assemblages and the surface patterns on pottery and paintings, the two exhibits are actually quite close in appearance. So the x and the y chromosomes may not be all that different in the end (though I’m grateful for the small differences there are).