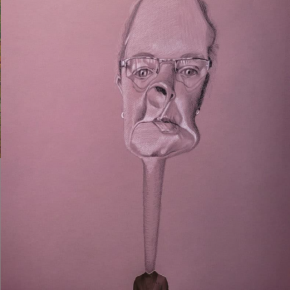 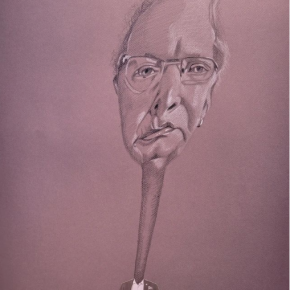 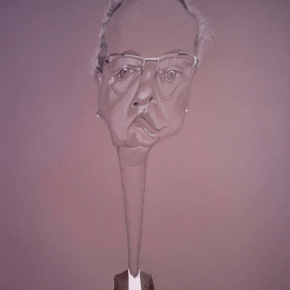 Faced with Kristina Lenzi’s 11 wicked caricatures at Bountiful Davis Art Center, “subtle” might not be the first word that comes to mind. Such large, distorted heads sitting atop long necks that grow out of bodies so tiny a viewer may overlook them — it all feels less to do with refined expression and more aligned with spectacle. But look how anatomically correct the heads are, even as their flesh and bones fold toward cubist geometry, and then note how carefully light and shade are rendered, even on something the artist could not have seen until after she drew it. Although superficially they resemble caricatures, such as art students line up outside amusement parks and vacation resorts offering to draw, or professionals make at trade shows and the like, the context here is unconventional, if not outright puzzling.

There’s something going on here, something to do with deliberately using a finely-tuned set of skills to produce a mutant freak. Who draws herself this way? Although Lenzi has been teaching drawing and related skills at Weber State for years, her primary impact has been in the genre of Performance Art, and the sense of urgency at the core of Performance might have spread into her two-dimensional art. From the beginning, though, she functionally denied any distinction between her media, arguing that drawing is just as much a performance as stumbling through the City Library blindfolded, dragging two copies of the Diagnostic and Statistical Manual — the catalog of acceptable mental disorders — by ropes. And after taking the time to closely study these undeniable self-portraits, it seems that while she’s still concerned with the same urgent social abuses — of mental health, women, human rights, and a whole host of what are coming to be known as identity issues — her approach has become increasingly less provocative: calibrated more to entertain and engage, rather than polarize an audience. By making imagery everyone can agree on, even laugh at, then slipping in the ideas that really matter to her, maybe she can take her audience along with her.

In popular speech, any image distorted so as to be dream-like risks being labeled “surreal,” and Lenzi’s heads, each titled “Self Portrait Posing As a (Vocational Identity),” are no less likely to suffer that fate. Ironically, Lenzi’s characterization of her process comes close to what the original Surrealists said about their work, which was that they followed their impulses without rational intervention, only discovering a justification after the fact, if then. This, after all, is the key to working from the unconscious. Compare that to Lenzi’s artist’s statement:

These distorted self-portraits come from a humorous place in me. While I draw, I laugh throughout the drawing process at the idea of placing myself in a sort of absurdity. I find little bodies to collage first and then I add the drawing of the long neck and large, distorted head with a specific persona in mind. But upon closer inspection, after the process, seriousness emerges in regard to the drawings as finished products.

It may be that the best way to fathom this project is to follow the initial joke and decode the symbols to see how they get serious together. The eleven fictional self-portraits include the following:

What more can be said about this list than that it reads like the set-up for a really mean joke? Since when does the job description for a president’s speech writer overlap with that of a serial killer? What do an investment banker and a used car salesman have in common? How is a wedding planner like a plastic surgeon? Closer to the heart of the matter, though, the broader and more general question might be “Who wants these jobs anyway?” It’s been said that so long as a person’s work provides something that others genuinely need, the work can be both satisfying and fulfilling. How do these careers measure on that scale?

Up to a point, the viewer might have taken the overall title — “The Self-Important Artist” — as self-criticism, even self-mockery aiming to use oneself, one’s own confession, to point out how advancement, status, and such physical icons of success as clothing and haircuts can warp achievement, and the person who attains it. Lenzi might add that there is some institutional sexism, racism, and class warfare if you but look deep enough. But for now, she’s content to make points her audience can agree on, even if they’re not quite sure what they are, and just as she describes the joke becoming more serious as she finds her way through it, the predicament she describes takes on much broader and more serious implications, and the misshapen heads begin to make a different degree of sense. They begin to look caught in some sort of super wind storm that is twisting them all out of shape. Or they resemble the heads of newborn babies, but with the features of adults. Or, maybe they’re not heads at all. How about cinematic granaries tossed about by Hollywood tornados, warping like paper lanterns in the storm? They make visible the concealed blows and hidden injuries that accumulate while ambition, office politics, greed, and fear do their worst to dreams and ideals. 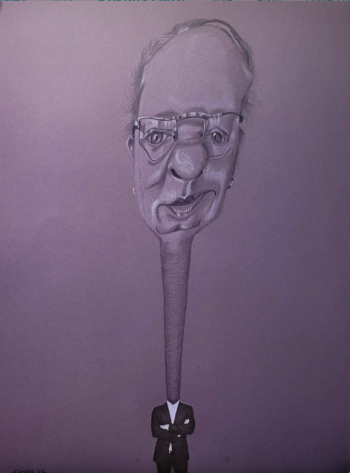 So how about this? What if Lenzi is exploring the Portrait of Dorian Gray, American Capitalist style? What if the man in the expensive suit with the narrow tie shares more than he thinks with the guy who works in the equally-carefully chosen leisure outfit? What each would look like if we could only see them through some spiritual X-ray machine? Could we see the psychic cost of their success, or failure, or just the choices they made and continue to make? What if these are the portraits of those whom Kristina Lenzi has met on the way up through art school and some miscellaneous day jobs, even as they were struggling to hold their ground, or were perhaps already on their way back down?