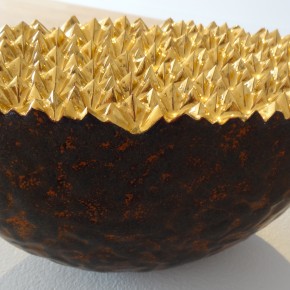 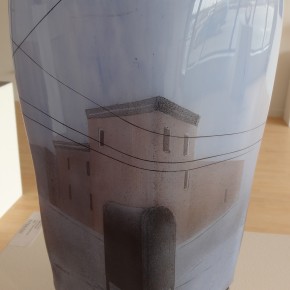 Before It’s Too Late by Hyunsung Cho 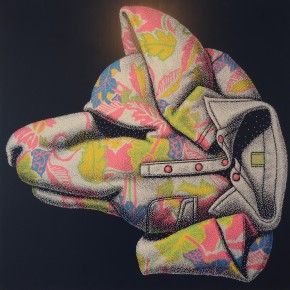 To Live by Jong Seok Yoon 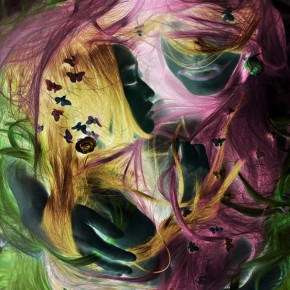 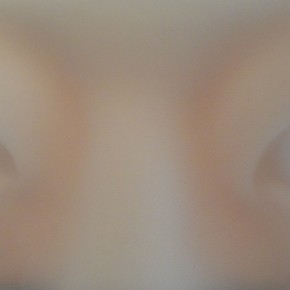 Look Aside by Sangsik Hong 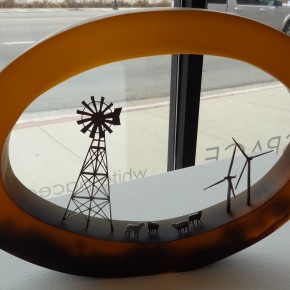 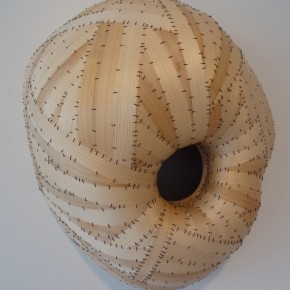 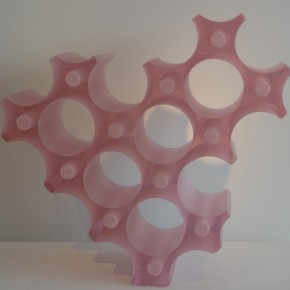 Hyunsung Cho did something artists have traditionally been expected to do: he saw something on the street—it happened to be a mailbox—thought of his parents, then went home and made a work of art about it. Because Cho works in glass, he was able to create a luminous bubble, fragile as thought, that mimics the profile of the mailbox, then wrap a picture of what he saw around it. In walking around in order to see all of “Before It’s Too Late,” the viewer does something akin to what the original urban scene would have required: revolving 360 degrees. The two motions—standing still and turning, or walking around something that stands still—serve as physical analogs for each other. The glass on which the scene is painted is a vessel, an allegorical letter home: its contents meant as much for his parents as for us. And while the bell-like shape resembles the mailbox, it expands slightly at the top, suggesting the way his feelings may have expanded within his chest as he thought about them. The pale colors and lack of background details gives the rendering a ghostly quality suited to memory, a thought that is reinforced by the ghostly shape: round on top, open on the bottom, like a sheet thrown over a child on Halloween, or a floating bubble of ectoplasm.

Cho is one of eight Korean-born artists whose works are on display at Patrajdas Contemporary, within the Whitespace Gallery in Ogden, through May. Some of them live in the United States, while others choose to remain in Korea. In keeping with their native tradition, each makes work that is technically ambitious, through which he presents content—themes and values—meant to showcase his individuality while making clear his connection to society at large. Among the most striking, in spite of their comparatively conventional technique, are Jong Seok Yoon’s paintings of items of apparel, thematically chosen and then folded to mimic iconic objects. “To Live”—a shirt folded into the shape of a canine head—and “A Net Hanging Down”—an athlete’s team shirt folded into a gun—make compound statements through thousands of painstakingly-applied, 3-D color dots.

The subtle colors and simple form of “Before It’s Too Late” could hardly contrast more than they do with the erotically colorful, sensuous “Carerra II,” “Musical Inspiration III,” and “Fahrenheit 2,” all by Koh Sang Woo. He intends his photographs as artifacts of little less than a total work of art, much like the Gesamstkunstwerk Wagner wanted his operas to achieve. To that end, he paints his models and choreographs dances for them, then photographs the performance. What he doesn’t employ are digital processes that might interfere with direct access to the event. He shows color negative images, in which red hair becomes blue-green and shadows on dark flesh glow with light. This paradoxical illumination means to carry viewers beyond the intervention of photography and bring them as close as possible into the presence of the actual performance. Whether they adequately distinguish themselves from the digital trickery they eschew is a question raised by many modern artistic methods.

When American astronauts first flew to the moon, one of the most effective bits of evidence they brought back were photos of the Earth as a blue jewel floating in a vast, dark and empty space. These images captured the feeling of our planet as a lifeboat, an isolated and fragile home. Sadly, the feeling hasn’t lasted, but Mikyoung Jung has found a way to freshen it using mixed-media in a way that recalls miniature, carved cork landscapes encased in glass. “Sunrise to Sunset” and “Sustainability” retain the precious, vulnerable feel of these tiny renderings, adding ovals frames of cast glass, but hint at a solution to environmental deterioration through their use of traditional and modern windmills.

Meticulous craft that foregrounds its materials is evident in everything here. Sungsoo Kim also employs glass, using the expensive medium of casting in “Rediscovery” to call attention to another environmental concern: the plague of cheap, extruded foam packing materials. University of Wisconsin professor Minkyu Lee uses heavy glazes on textured ceramic bodies to call attention to the repetitive nature of the physical world. New York emigre Heechan Kim strips handicraft materials and techniques developed for utilitarian use of their functional justification so that their innate qualities become appreciable. Perhaps the most remarkable transformation of a mundane material takes place in the hands of Sangsit Hong, who sculpts plastic drinking straws into closeup, bas-relief images of sensitive and sensual parts of the human face. Works like the panoramic “Stare” encourage close scrutiny of the compound curves than make up the face, but it’s necessary to back away in order to see catch the trick: reflections on the eye’s cornea, found at the bottom of individual straws, can only be seen when parallax is eliminated by distance. The pursed lips of “Mouth” are lit by a cool blue LED glow that throws doubt on their seeming warmth and, from the side, suggests an exhaled breath.

We live in an age of ‘international’ languages: English is employed in communications, but there is also a ‘universal’ visual language used in art. Yet here we can see how this language is inflected by a local culture, so that a viewer remains aware that these are works from another country—at least when this many artists are seen together. The trick, then, is to see the supposedly universal art in other, more mainstream venues, as exemplary of similarly culturally inflected expressions. These qualities may seem to limit the art works that display them, but isn’t it equally possible that they ground them in specific, actual experience, instead of the vague, the anonymous, and the disconnected?