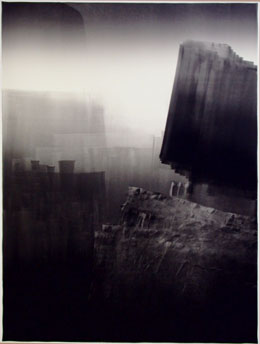 Walter Benjamin laments, in his essay “The Work of Art in the Age of Its Reproducibility”, that modern works of art have lost their “aura.” Modern images, Benjamin states, no longer have the ability to inspire or create awe in their viewers. . . and I was beginning to believe that he was right until Koichi Yamamoto’s current exhibition at the Art Access Gallery. With every print, Yamamoto mingles seriousness with play, and monumental forms with a sense of intimacy. His series of monotype prints all started with an impulse that his singular creative vision immediately recognized.

In the beginning there was a “mountain of garbage.” There is a 1980’s poster Koichi remembers from Osaka, Japan, promoting paper recycling. The title was “A Mountain of Garbage is a Mountain of Resources.” Since then, Koichi has adapted this habit of searching for an idea from many different garbage cans. “I consider that ‘idea’ as the fundamental element for making art pieces. Often I do discover it from other people’s discarded, unwanted byproducts in waste bins at print studios.”

The monotypes presented at the Art Access Gallery are examples of Koichi’s work that started from those abandoned, almost unlimited resources found in the waste cans. Being efficient is ideal, if I can utilize these byproducts of maintenance into complete art works, I would minimize waste.” 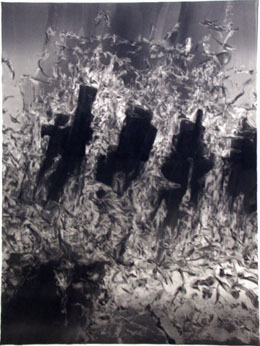 Koichi began cleaning rollers on printing paper, simultaneously creating works of art from the “byproducts of maintenance.” Monotype printmaking is the closest process that a printmaker gets to painting. The image is drawn, painted, scrapped, rolled, wiped, etc. etc. onto a plexiglass surface and run through the press transferring the image up to the paper. Koichi states that his monotypes represent an artistic investigation into the subject of “waste management.” Out of the rubbish, he has created imposing landscapes of the imagination and images filled with motion and chaos. Yamamoto has restored my faith that artists still have the ability to inspire.

The Art Access exhibit, which also features ceramicist Dan Murphy, continues through March 10th. May 19th & 20th Koichi Yamamoto will hold a Master Class and Artist talk at Saltgrass Printmakers (click for details). More examples of the artist’s work can be seen here.

This article originally appeared in the March 2006 edition of 15 Bytes.

Stefanie Dykes, is a graduate of the University of Utah’s MFA program and co-founder of Salt Lake’s Saltgrass Printmakers.