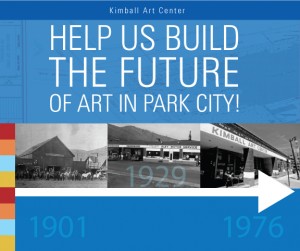 A lot of our Mixed Media articles from the past week concern the Park City Arts Festival, a project of the Kimball Art Center (see below).

One of the Kimball’s projects that hasn’t yet hit the headlines is their new Transformation Project, a building project announced last week.

The Kimball Art Center began when Bill Kimball gave the community his former garage, located on Park City’s Main Street. The Kimball has now announced their plans to preserve and renovate the original building while creating a new “state of the art Art Center” adjacent to the old one.

KAC is launching an international architectural design competition inviting architects from around the world to Park City to design the new building. The design competition will kick off in Fall 2011 with letters of invitation going out to architects. A jury will decide on the winner of the competition. This phased project is expected to begin mid 2013 estimating 24 months to complete the project in mid 2015.

During the Park City Arts Festival this weekend KAC set up a Community Wall on the corner of Heber Ave. and Main Street to solicit input. Additional comments can be sent to transformation@kimballartcenter.org a

Zen and the art of watercolor. Painting has been a longtime passion for art instructor and watercolor artist Linda Moffitt
http://www.sltrib.com/sltrib/news/52234870-78/moffitt-watercolor-painting-art.html.csp

Economy paints a darkening picture as artists arrive in Park City.
Some with booths remain confident sales will be solid over the weekend.
http://www.parkrecord.com/ci_18625639?source=most_viewed

People’s Choice to determine public art in Coalville. People who love art can check out the Summit County Public Art Advisory Board’s People’s Choice contest in Coalville and vote for their favorite sculpture. The winning artwork will then be purchased by the city and displayed outside in a public art gallery.
http://www.parkrecord.com/ci_18625691

Of the 200 artists that will show and sell their works during the 42nd Kimball Arts Festival this weekend, 20 are from the Park City Professional Artists Association.The association promotes exhibition, education, and networking and offers exposer and support for local artists of Summit and Wasatch Counties, said Kimball Art Center executive director Robin Marrouche.
http://www.parkrecord.com/ci_18625685