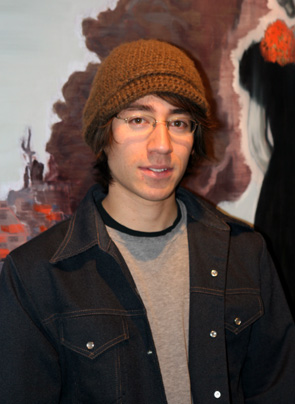 At the close of Six Sinking Ships and I’m Gone, a solo exhibit featuring his own work, artist and gallery owner Kenny Riches will exit the Utah art scene, leaving his unique mark on the Broadway District and leaving direction of his popular Kayo Gallery to Shilo Jackson, previous director of the Women’s Art Center.

As he leaves Kayo, headed, eventually, to New York City, the almost-native Utahan hopes to visit first Japan, where he was born and where he lived for just weeks before his parents moved to the Beehive State. While in his birthplace, the 26-year-old Riches will, he says, “just try to get a show, just check out the arts there. No galleries. No more business. While I enjoyed the business stuff,” he says, “it definitely eats up a lot of time and energy that I would rather spend trying to pursue my art.”

In just four years, Riches has efficiently utilized his time and vision to achieve local notoriety and to help create the current artistic atmosphere of the Broadway District. With Matt Monson, who owns model.citizen, Riches organized the Fashion Stroll, which happens quarterly. He has promoted monthly exhibits, curated at the alternative art space The Pickle Company, taught classes, and started (then dissolved) Art Speak SLC, a visual arts publication. All this in addition to founding Kayo Gallery in February 2004. “I feel like [Kayo] has given the Utah art scene a lot of life. I get great turn-outs,” Riches says.

Described as his “child for the last four years” by its director, Kayo is named after Riches, the word Kayo being the pronunciation of the initials of its founder’s first and middle names, Kenny Oiwa. Riches’ brainchild sprouted from his personal preferences emphasized by contrasting elements of many local shows, and by his respect for fellow students in the University of Utah’s art program, which he attended for two years. The then-student saw that many Utah venues focused only on local artists and on limited styles. “That’s kind of why I decided to do the gallery,” he says, “in hopes to try to bring more progressive, contemporary artwork to Salt Lake and give a showcase for the artists who are doing it.”

The physical space of the gallery, was also carefully chosen, according to Riches’ tastes and as an alternative to the styles of other galleries. Riches especially emphasizes simplicity, avoiding interior design elements, such as brightly-colored walls, that he feels compete with the artwork on display. “I wanted a very minimal, white-wall gallery, a place where it doesn’t need to be flashy, just so long as it’s a nice environment to present the art work,” he says. “[Kayo] is just a box, a white box.” 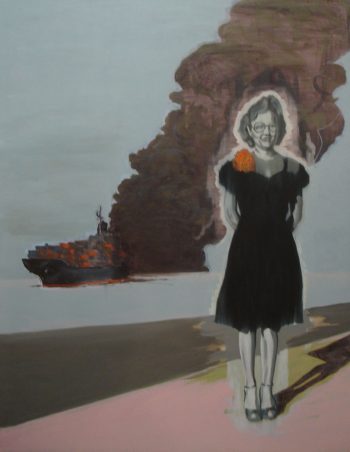 In his “white box,” Riches has displayed a variety of artwork. “I’m open to showing everything,” he says. Until multiple city permit requirements deterred him from it, Riches hosted even musical acts in addition to his mainstay of visual arts. Kayo’s featured exhibits have been, according to Riches, “something that’s more progressive and contemporary, very intentional. The artist has to be a little bit more conceptual and know what they’re doing and be able to talk about their work.” Relying more on his own eye and instinct than on resume, Kayo’s owner has opted to display work from several emergés, as well as from more established artists. “I try to show people who I know will still be making art five years down the line,” he says.

Four years after Kayo’s opening, Riches is still making his art, and is eager to focus solely on that pursuit. To transition from art director into his new role, Riches will present Kayo’s first exhibit of his work, oil paintings, which the artist describes as “figurative, representational art.” The pieces, including some large-scale works as sizable as five-by-nine feet, depict people super-imposed over sinking ships of which they are totally, eerily unaware. 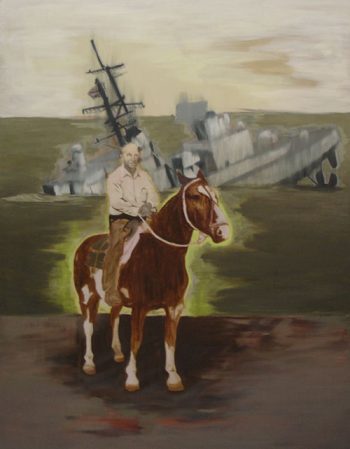 The exhibit, Riches says, is “based on a lot of the things that I’ve had brewing for the last four years, but haven’t had time to paint.” The sinking ship is a metaphor, spawned by a conversation with a friend about her key-chain replica of the Titanic and about sinking ships in general. “We got into this great conversation about humanity,” he says. “There were so many things mixed into it. Essentially, you just never know. It’s doing things in different directions. It’s the past and it’s the present. It’s always excitement,” remembers the artist.

Layered on top of these ships, Riches paints figures of oblivious individuals from found 1920’s-1950’s photographs. “Whenever I go to a new town, I always try to hunt-down an antique store and buy old photographs to use as my references,” he says. The use of these images, says Riches, is “based on the idea of replacing memory and experience with photographs. It takes the color out of life if you remember the photograph at Disneyland instead of remembering the feeling of the air against your face.” 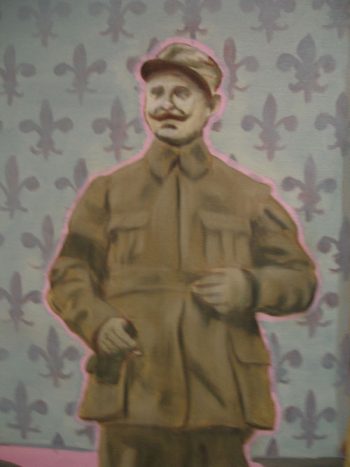 Many fond memories of Salt Lake will go with Riches. He will especially miss his symbiotic relationships with the artists whose work was featured at Kayo. “They’re working at making the artwork; and you’re working at keeping business alive so they can exhibit. It’s good,” he says. “I love the Utah art scene,” he says. “I’ll miss it.”