Katharine Coles: Poetry From One World Passing to the Next 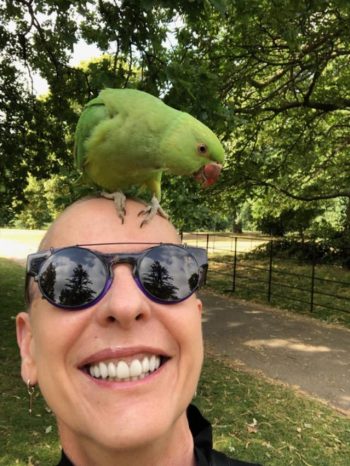 … Mutter all you want: in this

You are different from nobody, even in your feeling
Alone at night when darkness brings itself down

Blazing the house across the way, where you imagine
Neighbors you haven’t met baking potatoes

Or settling down in front of the TV, looking to fill

You might imagine these lines, by University of Utah Distinguished Professor Katharine Coles, being written sometime in the last month, an example of poetry in the time of coronavirus. But “Self Portrait with Nightfall,” the poem from which they are taken, appeared in her seventh collection of poetry, Wayward, published in 2019. Coles calls it “one of those poems that is written in one world and manages to pass into the next.”

It was published in Wayward, which I now think of as a very innocent (though self-awaredly so) book, in 2019, and appeared on the Verse Daily web site in December.  Somehow, I missed it there; I think I was traveling, and was only made aware of it there in early April, after the pandemic had us firmly in its grip. I posted it on Facebook, of course, and the response was kind of overwhelming. People were definitely reading it as speaking to this moment as to their own losses, absences, precariousnesses. This is why I chose it: it is very present to me.

Coles’ memoir Look Both Ways was a finalist for the 15 Bytes Book Award in Creative Nonfiction last year. She was the 2018-19 Poet-in-Residence at the Natural History Museum of Utah and the SLC Public Library for the Poets House FIELD WORK program. In 2010, she traveled to Antarctica to write poems under the auspices of the National Science Foundation’s Antarctic Artists and Writers Program.  She has also received awards from the NEA, the NEH, and the Guggenheim Foundation. Her The Stranger I Become: essays in reckless poetics, published by Turtle Point Press, is forthcoming in fall 2020.

Coles’ reckless endeavors in poetry began at a young age, when she came under the sway of, among other poets, Edna St. Vincent Millay. “I’ve always loved Millay,” she says, “and I think she doesn’t get enough airing. I memorized ‘Assault’ when I was a swoony teenager, constantly being ‘Waylaid by beauty!’  It was only in returning to it later that I realized there’s not only a metaphorical ravishment going on, but the threat of actual violence.”

In honor of National Poetry Month, we’ve asked poets in our state to record themselves reading from their own work as well as from the work of a poet they admire. In recognition of these unique times, we’re calling the series Poets in the Pajamas.