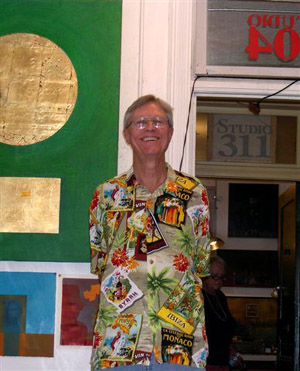 The artwork above my mantel changes frequently, but usually there is a monotype that my wife, Martha Klein, has done or a painting of my own. Martha and I participate in numerous art festivals during the summer months, so we have to take all of our work down and then replace it when we get back from a festival. We also sell a lot of work, so we put something above the mantel that didn’t get sold and is the right size for the space.

I like the downtown library most of all. I have been in several new public libraries recently, including the one in Seattle, and I think the Salt Lake library is the best one I have visited. It really fits the site very well and is cool looking from every vantage point, no matter where you are standing, both inside and outside of the structure. It really is a fantastic building and Salt Lake is fortunate to have it right downtown. One thing I would do if I were the head of UTA would be to extend the free fare zone over to the library, so that tourists would be able to visit it without paying for TRAX.

Martha and I went to San Francisco earlier this year and saw four terrific exhibits. I can’t decide which one I thought was the best. We saw the Brice Marden exhibit that was on loan from the Museum of Modern Art. I loved this show. We also saw an exhibit of Japanese bamboo baskets at the Asian Museum. This was also totally fantastic, beyond comprehesion in a way. Then, we got to see the Picasso Influences America show (that isn’t its real title, but that’s what it was.) This show had twenty of the most famous American paintings of the twentieth century. Finally, we got to see a complete retrospective exhibit of the clothing and career of Vivienne Westwood, an English clothing designer. This show was completely successful and stimulating. It was at the De Young museum in Griffith Park that has been rebuilt after the most recent earthquake. The building itself is stunning. Way to go, San Francisco!

This is our chance to check in with members of Utah’s art community to see what they’ve been reading, seeing, doing.