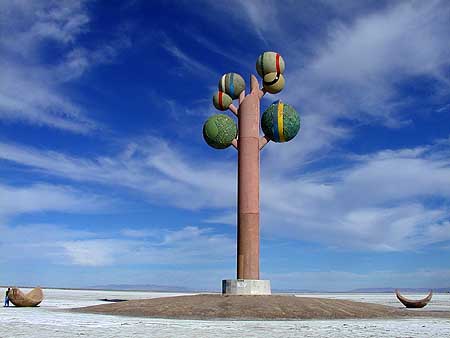 If you’ve ever driven west from Salt Lake to Wendover you’ve seen it: Karl Momen’s “Tree of Utah.” Momen’s sculpture, along with Robert Smithson’s “Spiral Jetty” and Nancy Holt’s “Sun Tunnels” make Utah a destination place for international aficionados of land art. But while the “Spiral Jetty” and “Sun Tunnels” remain places of pilgrimage, seen mostly by those who journey to see them, Momen’s sculpture is a huge vertical focal point in a vast horizontal landscape along a major American highway.

This means that Momen’s piece is probably the most frequently viewed and commented work from the land art movement. We have included here a very small array of comments about the work found on the web. We invite you to google your own way through the countless responses to this Utah landmark.

From Utahbooks.com: “Swedish artist and sculptor Karl Momen, while driving through Utah on Highway 80 en route to California, had a ‘vision’ of a Tree in the midst of that barren desert. Financing the project himself, he put his ‘vision’ to form and during 1982-1986 created an 87′ high sculpture in that desert and called it The Tree of Utah. He then donated his ‘Tree of Utah’ to the State of Utah.”

From Utah.com, the official state tourism site. “An abstract artistic sculpture called Metaphor: The Tree of Utah stands of the edge of I-80 on the barren Salt Flats west of Salt Lake City.Swedish artist Karl Momen created the 87-foot high tree between 1982-1986. He financed the project himself to bring bold color and beauty to the stark, flat, salty landscape. The sculpture is made of 225 tons of cement, almost 2,000 ceramic tiles and five tons of welding rod, and tons of minerals and rocks native to Utah.”

Roadsideamerica calls it “environmental comedy. . . ‘Metaphor: The Tree of Utah’ can’t be serious. Metaphor is an 87-foot tall sculpture poking up out of the white plains of the Bonneville Salt Flats.”

Utah Pictures, which provided our images, writes “I didn’t plan on stopping at the Tree of Utah, but someone needed to use the bathroom, and this is the only cover for miles. . . The Tree of Utah, in France, this is genus. It’s a metaphor: Tennis ball trees grow in barren areas, but sometimes the shells peal off. Huh?”

Citysearch writes: “While not a convenient attraction for city dwellers, the tree is a welcome site for drivers snoozing along the barren stretch between Salt Lake and Wendover. Karl Momen created this abstract wonder in 1981, believing the stark white salt flats to be the perfect canvas for his “life-affirming symbol.” At 87 feet tall, the Tree of Utah sticks out like a sore, cement thumb in Utah’s west desert.”

“As you drive across the Salt Flats, you’ll encounter nothing but 80 miles of nothing. The landscape is pretty stark. To the pioneers, this must have been what they thought hell looked like. About 25 miles east of Wendover, sculptor Karl Momen in 1986 erected Metaphor, the tree of Utah. It is about the only thing that breaks the horizon for miles around.” from Route40.net

This from truesecretsof.com “The Tree of Utah has been called everything from a ‘Vision in the Desert’ to ‘Momen’s Monumental Meatballs.’ The Wall Street Journal even carried a headline that read ‘Sure, the Redwoods Grow Taller, But They Don’t Have Cocunuts.’

From a blog: “In the middle of the salt flats, which stretch out on either side of Highway 80 for miles and miles, is a sculpture. It’s apparently entitled “Metaphor: The Tree of Life” but it’s been affectionately nicknamed “Metaphor: The Tree of Utah”. It’s art that would look normal if it were 1/4 the size it actually is, and situated somewhere on a college campus, but it’s 87 feet high and in the middle of nowhere, and surrounded by NOTHING for at least 50 miles on either side, which makes it nearly unbearably creepy.”