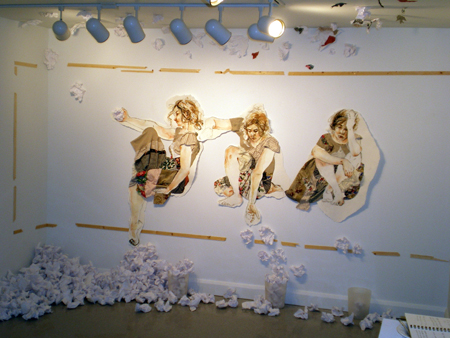 “Time held me green and dying, though I sang in my chains like the sea.” The great Welsh poet Dylan Thomas was that rare individual who could retain the feeling of being young until he had lived long enough and acquired enough artistry to capture it. The unfortunate fact is that the young, whose days seem fullest because they are most sensitive to the character and quality of every newly discovered experience, are least able to set their vivid moments in perspective. To be young is to feel the world hyperbolically, but hyperbole in expression is the enemy of the reflection in tranquility Wordsworth named the wellspring of art. As experience subsides like the sea after a storm, along with it subsides the passion that empowers the artist.

Meanwhile, most student painting, sculpture, printmaking, photography, and film are not art; they’re homework. An assignment carried out brilliantly still has about it an air of ventriloquism. That’s what sets Altspace, Snow College’s new laboratory gallery, apart from the demonstrations of technique that characterize most art school displays, while making a visit more of an adventure than many more conventional galleries can offer. Students who wish to show here must prepare a portfolio and a proposal and apply just as they would at any other venue. If accepted, they are responsible not only for producing a body of original work, but for hanging, publicizing, possibly selling, and ultimately taking it down. Even the food at the opening, held every Monday at noon, is their responsibility. The school’s newspaper, Snowdrift, reviews the shows with the same catastrophic self-importance as any other journalist. It’s a genuine baptism of fire that an undergraduate artist can anticipate with the authentic blend of eagerness and dread. 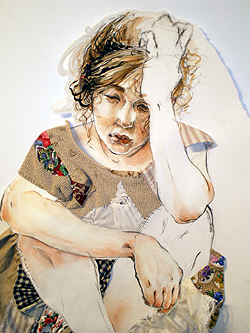 Karen Sorenson’s installation, While no one is watching, up this week in Altspace, is a plangent self-portrait that uses an experimental combination of materials and media, along with rigorous technique and careful exploitation of a pre-existing space, to compress the artist’s autobiography into a seemingly quiet moment of eloquent reflection that is disciplined and free of self-indulgence. The three central figures overlap in a suggestion of narrative sequence, reinforced by the gradual filling up and spilling over of the wastebasket that sits on the floor beneath each. Sorenson successfully exploits the small room’s odd floor plan by making this sequence read right to left, into the corner in the back. The figures’ self-containment reinforces the title, casting viewers as witnesses, while extending the work outside its framing device—splintered fragments of lath that evoke both the ideal abstraction of dotted lines and the imperfection of physical reality—onto the adjoining walls, floor, and ceiling, effectively wrapping the depiction around and the involved witnesses, implying an intimacy no less dramatic for being theatrical. By covering the floor with wadded-up pieces of paper that fall from the figures’ hands, denoting waste but connoting creative struggle, and stretching up to and across the ceiling with bits of fabric that take on the shapes of birds and take flight, Sorenson evokes Hamlet’s line about prayer: “My words fly up; my thoughts remain below.”

The heart of the installation is the trio of bravura constructions centered on the gallery’s long wall. Each is painted and assembled on heavy paper that supports shallow relief in the figure. While the flesh and hair are drawn and painted directly on the paper, the attached clothing is sewn together from what the artist’s statement says are pieces of her own clothing. The rich interplay between these two contrasting mediums—two-dimensional representation and three-dimensional construction—makes for images that move back and forth between presentation and representation as they move in and out of the picture plane. Here the fabrics pull the drawing out into space; there the play of paint on paper presses the sculptural garments back into the wall. 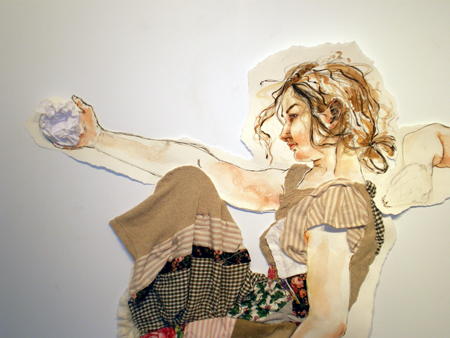 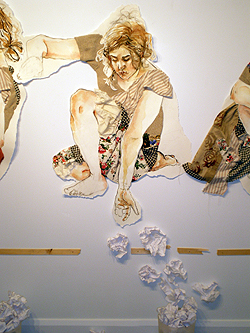 Snow College’s visual arts program focuses on fundamentals—drawing, representational painting, and 3-D design—in the belief that these traditional skills will best enable an artist to find material expressions, and that only in working out a material analog can an artist comprehend her own personal insights, the necessary first step to communicating with others. Karen Sorenson’s assured technical invention alone confirms that conception of what artists need in order to do what they do. Even visitors to Altspace who know nothing of the artist’s history experience a kinship with the feelings of solitude and self-questioning she explores here. But it’s not necessary to have her in an expository writing class, as I once did, to realize that there is something deeper being dissected here. Further into her statement, Sorenson explains that the clothes she remodeled to dress her image came from two sources. Some were given to her by her mother, since whose death they constitute part of a diminishing physical connection between mother and child. She refers to this as the “sweet.” Others were cast-offs and charitable donations meant to take the place of love: these she labels “bitter.” What’s trite to say but deeply moving to behold is the understanding that neither can be fully appreciated without the other. Instead, both merge into the palpable sense of a far richer interior life than anyone could display, or comprehend, from the outside. Karen Sorenson reverses the old teenage wail: none of us is on the outside, looking in. It’s worse than that. We’re all on the inside, looking out.