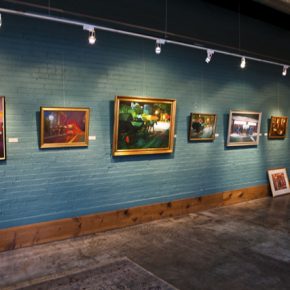 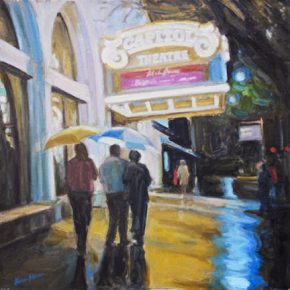 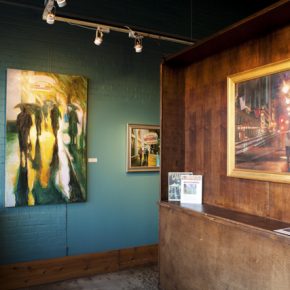 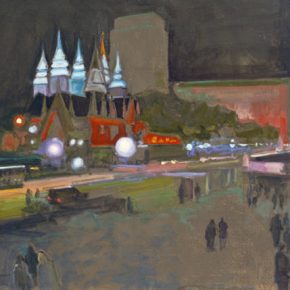 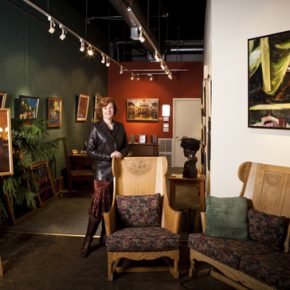 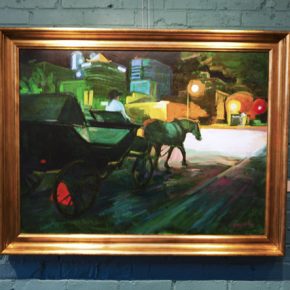 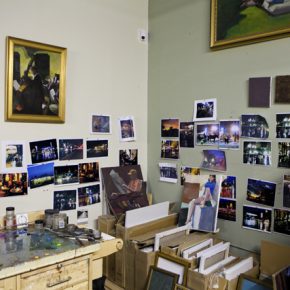 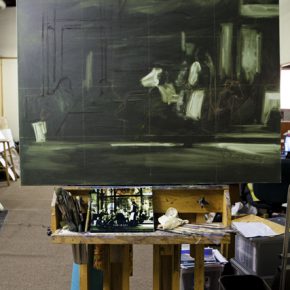 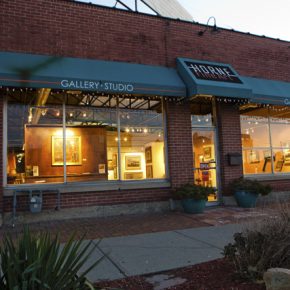 Karen Horne is an “artist’s artist” if there is such a thing. She has taken all the lessons we try to absorb in the classroom or workshops – like color theory, simplification, gesture drawing, value and form, and the lush handling of paint – and demonstrates them in her paintings. Best of all, we can see and study her work right here in Salt Lake City at Horne Gallery, where her current body of work – The Color of Night – is on display through December 23 (and into January on a more limited schedule).

Armed with her camera, Horne stalks her subjects after dark all over the city. She started with performance venues, like the Capitol Theatre, Tower Theatre, and Broadway Cinema, where neon reflects off the pavement, and figures gather in the lights and shadows. Then, with the abundance of rain last year, she found reflections of lights from cars and gas stations on wet pavement compelling.

Most of her paintings include figures, sometimes little more than shadows in the dark, but their body language tells a story. “Meet Me At the Tower” is a perfect example. You might miss the figures sitting casually at tables outside the theatre and in front of the coffee shop next door. But a closer look reveals the groupings of people, meeting, waiting for the next show.

It’s the gesture she’s after in her paintings. Drawing and painting people is a skill she honed in school and practiced in New York City subways. “When I was living in New York City, I took the subway into work,” says Horne. “I worked at a museum. I would practice my drawing on the subway. Of course that means it’s a constantly shifting subject, so it made me do thousands of gesture drawings. Ten seconds to get the way someone leans. I was interested in getting the attitude of the person, what was particular about their body language in just a few marks.”

Horne’s paintings are not about the individual people, but they way they fit into and become part of the environment. “They have to be woven into the architecture or else you’ll get fixated on someone’s face. It’s a balancing act of detail and simplification,” says Horne.

The paintings on display include twilight as well as the darkest nights. One that particularly stands out is a twilight view of Red Rock Brewery on 200 West. The building, with its neon light, hovers between street pavement and clouded sunset sky. It is a study in color theory: orange and blue complements, color temperatures moving from warm to cool, and neutrals making the colors sparkle. The pavement, which a less experienced painter might see as gray, seems to glow blue, a subtle cross between turquoise and violet.

Horne explains that she manipulates her night photographs in Photoshop. She lightens them so that she can see more detail. While she uses the colors captured in the photo, she may also push the colors to make a better painting. The painting of the Broadway Cinema, for example is pushed to the cool side with silvery gray, cool pinks and blue. This painting will be featured on this year’s Christmas card from the Salt Lake Film Society.

Horne works on a toned stretched linen surface. The tone she uses may be the predominant color in the painting, or its complement. This helps her capture the overall tone of the painting and simplify the composition. Rather than doing a sketch or value study first, she usually dives right into the painting, though, she says, “I try to start a painting when I know how it’s going to look.” She does, however, begin by sketching her major forms onto the toned canvas with charcoal.

One of the nice things about having your own gallery with a studio attached, says Horne, is that you can continue painting and adding new pieces to the exhibit. There are works in progress on her several studio easels, as well as dozens of photographs tacked to the walls. As she continues the night series, she plans to simplify and abstract her subjects even more. She points to a large painting of the Capitol Theatre currently hanging in the exhibit as an example. The theatre marquee is loosely suggested in form and color at the top of the painting. Below are undulating shapes of figures and reflections that suggest movement. Through color and form, Horne communicates the feeling of excitement of an evening at the theatre.

Given her lineage, it’s hardly surprising that Karen Horne is an artist. Her great grandmother was Alice Merrill Horne, founder of the Utah Arts Council. Horne grew up with a house full of wonderful paintings. Her mother, Phyllis, had trained in fashion illustration but became more interested in fine art. Karen, the oldest of six children, was always sketching as a child. At Skyline High School her interests were divided between art and participation on the school math team.

Despite all of the art influences, she set off for Yale University planning to follow a pre-med curriculum and to be a doctor like her father, an orthopedic and hand surgeon who still practices at age 79. In fact her medical lineage is as deep and rich as the arts side, with two uncles and a grandfather who were doctors. However, after fainting while watching her father in surgery, she decided she was not cut out to be a doctor. The artists she associated with in her elective art classes at Yale felt more like her “tribe.” Besides, she could exercise her math and spatial skills doing figurative sculpture.

At Yale, she studied figure sculpture as well as painting, and worked a lot with color using Joseph Alber’s theories and methods. After graduation, she went to Indiana University and earned a master of fine arts degree with a concentration on figure painting. She then moved back to New York City and worked for 12 years before returning to Utah in 1996.

Horne Gallery, which features Phyllis Horne’s work as well as Karen’s and a few other artists, began about nine years ago. When she first opened the gallery, says Horne, “I was curating shows here for other artists. We would have a thematic show and all the artists would paint to that theme. While I enjoyed that and seeing everyone’s work, I found that I wasn’t getting to my own work. Now we have a simpler format, with just my mom and myself and sometimes a few other artists.”

The regular gallery hours are Wednesday-Friday, 12-6 p.m., and Saturday, 12-4 p.m. After December 23, and through January, the hours will be more limited. Visitors may call 801-533-4200 for information or an appointment. Or visit www.hornefineart.com.

This article appeared in the December 2011 edition of 15 Bytes.