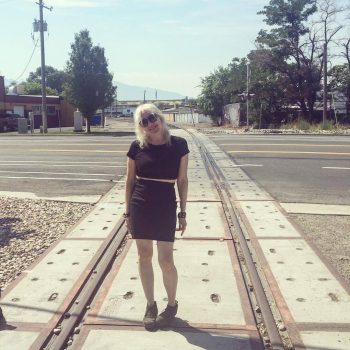 This month we bring you a previously unpublished short story by Julie Turley, a writer and librarian whose work has appeared in the North American Review, Western Humanities Review, Citron Review, Otis Nebula, and elsewhere.

Currently, Turley is quarantining in Brooklyn, New York, and working on a book-length oral history of the Salt Lake City punk scene, circa 1977 to 1987.

The editorial staff at 15 Bytes takes this opportunity to extend its well wishes to Julie, as well all artists, writers, and residents in Manhattan — the epicenter of our country’s coronavirus outbreak. The photograph pictured above was taken in Utah prior to the pandemic.

Green Tea’s main move was founding member Kevin sipping green tea on stage. So what would it be now?

We discussed this while toiling uphill to the only place on campus that still had electricity, where rock was happening. The trolleys set up for us students had stopped running until they could be converted, into what, no one knew.

“Green Tea needs to quit steeping in nostalgia,” we quoted from memory and high fived. We’d both read the same Rock Moves article, mulling over writer Ken’s pun. Too obvious?  We weren’t sure. We had spent our time on campus studying the way writing moved. But it did not matter–Ken had delivered what would be his last article and collapsed, weakened and starving.. And Rock Moves collapsed right after him.

“Let him pun in peace,” we said, cutting everyone slack now, even our cupboard, down to its last cans of things.

“Because everything is really ending. Get used to it, rockers,” asserted Kerplonk!, the only surviving rock  magazine down here. How they were hanging on, no one really knew, but Kerplonk! felt confident enough to put the faltering Green Tea on their latest issue.

Hence, Kerplonk!, unsentimental about the dying world, was helping us live in it a little easier. In fact, they scalded Green Tea in their coverage of their current tour: “These guys are veterans? Clyde falters, fumbles for a mic that seems to fit neither him nor the mic stand. No longer does rock and roll seem to keep its players young.”

There were other things, too: not just observations, but revelations: “Fans have long been generous about the fact that the marijuana leaves on Green Tea’s stage costumes have never existed in nature,” Kerplonk! wrote.

But maybe now these leaves would.

No one could predict how the earth would change, how rock would move.

As far as our moves, we needed to get what we could when we could. We looked at each other right then at the same time and high-fived.

And now look on stage: Was Kevin supposed to be tossing those little mylar stars out into the audience? Sprinkling them on us?

Okay, he could do that, we decided. We spotted the Kerplonk! writer down in front, scribbling away. Pushing past him, we rushed the stage, like fans with more energy than we had to spare, like fans had had for generations. We got close enough so that the stars touched down on our cheeks. Then we retraced our steps through the crowd, going against the surge, calling upon survival skills we would have to use more of each day, and climbed high up into the rafters to give others a chance, patting the stars into our skin so they would stay for a while.

On stage, Kevin had a new move: wrapping himself in his guitar cord so tightly he could not even play. Gentle moves had made this happen, barely detectable from where we were, but they all added up to something big.

We knew enough to know–there would be no encore now.

The crowd cheered, learning to love what they were left with.

This was one of those times:  the audience loving what the critic does not.

Green Tea now had to resort, against their wishes, to a new ending: to peter out sans guitar.

We had taken note: new generations would not rush forth–we were thinking how to regroup.

Here’s Kerplonk!: “While other bands had become self-sustaining, none of the members of Green Tea could farm, in spite of their idyllic, even agricultural name.”

The world was becoming new. “Lead singers need to start leading in ways that transcend the stage!” I shouted down to the writer.

We were having a hard time concentrating on anything, knowing where to look. Clyde, head to toe in leather irresponsibly treated to look like mylar, was trying to untangle Kevin, trying–we wanted to read–to thrust him into our new highly conscious world.

“Foraging for roots will sharpen our vision,” Kerplonk! had promised. “There will be upsides to the new world we cannot yet see.”

Even from this far away, we could make out Kevin’s guitar that bobbed around his body like the messenger bag of a student running to class. But it was Clyde making it move like that. He was not giving up. Finally, there was something at stake on stage. Outside, the rain agreed–it poured and we reached up and felt the stadium ceiling’s plaster dampen.

“Soon, new priorities will become clear, assert themselves. Rock will finally move forward,” Kerplonk!’s writer in the dark of the hall managed to scribble into a notebook.

On stage, was Green Tea receding or were we? Still and silent now, the band seemed to be looking to us. They had given us stars. Wasn’t that enough? They had given us everything. “Maybe this would be the new,” Kerplonk! wrote then. “Fans doing more, fans making . . .” the writer, underfed, still unsure.

“Listen!” we looked at each other, as the rain poured in. We raised our faces to meet it. Gripping the bench, our mylar stars were whisked away.  There were other stars somewhere out there above the rain–ancient ones, made of rock. We angled our heads to see them. Was Kerplonk! catching this?”

“No one could move like those two,” we hoped to read.

“Kerplonk!!” The hole grew and the ceiling opened for us.

You will want to take this down.

Our screams will be the music to come.