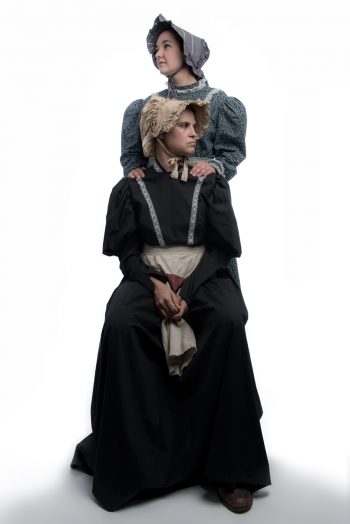 At the conclusion of Julie Jensen’s wrenching, two-person play Two-Headed on Sunday afternoon at the Rose Wagner, my companion wept while describing the scars an event like the massacre at Mountain Meadow can leave on people’s souls; this writer pondered plural marriage and how it was so vividly portrayed here — not as sisterhood is wunderbar but rather as a sometimes generation-spanning betrayal that may leave one feeling like she got an “Et tu, Brute?” stab to the solar plexus with a very large, very dull butcher’s knife. Grim stuff.

And it all started out so well. Amusingly, even. It is 1857 in Utah and two young friends, 10 years of age, giddy of an afternoon’s talk of boyfriends and similar matters – including some seemingly silly proscriptions of their Mormon faith – turn to more serious subjects, such as the wagon train from back East whose party of 127 souls has not been seen in days.

Lavinia (played convincingly by Brenda Hattingh) confides (after her buddy swears an oath to undergo curses worse than anything imaginable on Earth should she ever tell) that all in the party are dead. She knows this, she claims, because her father was the leader of the force that killed them. (She will later swear he was not there that day: “John D. Lee must suffer for them all.”) And the 127 deserved to die, Lavinia adds, because they hailed from Missouri where the Saints were persecuted and killed. She produces a “pure real silk” slip with real blood on it that belonged to “a Missouri woman. Blood of the damned,” Lavinia scoffs, with a tinge of the madness that will appear increasingly as the story accelerates.

Her friend, Hettie (the progressively astonishing actor Haley McCormick Jenkins), at first reluctantly and then fervently agrees with this interpretation of events and ultimately accepts the bloody slip and a heart-shaped locket from the wagon-train raid (one of many symbols in a play rich with them). The two are waiting for Jane, another friend who will figure prominently throughout the story, and both girls pine for handsome Ezra, another character who will haunt events in the play that unfold over 40 years in 10-year intervals.

It’s a multilayered, deeply disturbing but superbly directed and acted play about the nature of friendship, religion, patriarchy, unseen victims, murder, and responsibility. Hettie marries Lavinia’s father, a breach of friendship Lavinia seems to condemn irrevocably. But times and needs change and the women come together again, when Hettie will learn that her friend’s hatred of her parent comes from her actually being an eyewitness to the massacre at Mountain Meadow, the mass murders carried out by Mormons and, indeed, planned by Lavinia’s father.

Too much information, yes, but Pygmalion Productions conveys this and more in its promotional material. While some understanding of events at Mountain Meadow (the late Salt Lake Tribune historian Harold Schindler insisted that it is a meadow, not a meadows and the play holds to this) is necessary to understanding occurrences onstage, more serves only to spoil the plot.

It’s a perfect storm brewed by playwright Jensen; directed by the unfailingly brilliant Fran Pruyn; stage manager Jennie Pett (who also operated the lights); with simple but tremendously effective set design by Allen Smith; lighting design by Pilar I; evocative costumes (how did they manage those swift changes and perfectly scuffed boots?) by Maddiey Howell; and a special mention to the SoundScape design by Mikal Troy Klee that immeasurably enriched the theatrical experience with period tunes.