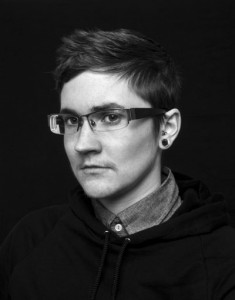 Julian Sagers was born and raised in Salt Lake City, Utah and is a senior in his last semester, working toward a Bachelor’s of Fine Art in printmaking from the University of Utah. His work emphasizes, in small to medium format, intaglio or relief prints with concepts related to deviations from the expected sexual or gender norms and response to the role society plays in defining normality. His work is highly figurative, emotive and representational with attention to draftsmanship.
He has emphasized in mezzotints and aquatints, for their supple nature of value and how well the mediums translate a drafted form while still maintaining an organic mark and somber mood, resonating with aspects of his theme such as isolation, melancholy and figurative and animalistic forms.
Julian has organised a portfolio, “Direction”, that was exhibited at the 1st Rocky Mountain Printmaking Alliance symposium, held in Boise 2011. This included students from the Universities of Colorado, Utah, Indiana and Washington State. Recently, he had a print selected for the Bradley International Print and Drawing Juried Exhibition 2013, and in 2012 exhibited work in the “Transgender Education Awareness Month Art Show” in Salt Lake City at the Gray Wall Gallery.

My work explores gender and sexual roles, deviations from the expected norms and the conflicts that arise as result. In the present cultural climate a black and white expectation of reality is forced onto the bell-curve of human nature.
Our society uses gender similarly to race–As a way to classify humans into easily identifiable groups, then divided into superior and inferior castes. To facilitate the ease of this system, rigid gender roles are set up to define ‘male’ and ‘female’ for easy identification. The more rigid the roles, the easier it is to spot when people deviate from the norms. In reality, the actual, external physical differences between the human sexes is very slight. The only reason it is so easy to tell the difference is because we have so many social clues and if looked at objectively and from a distance, however, the system can be seen as bigoted, illogical and superficial.
Individuals are sometimes rejected in spite of their lifestyles, choices, or identities hurting no one. Only those whose identities conform with societal expectations are allowed to freely practice and live without threat of harm, melancholy, oppression, or rejection, but sometimes these people will not allow others the same courtesy, placing their own lifestyle as the only one that’s valid and condemning anything different.
In my work I have focused on illustrating a transitive or androgynous figure and have used anthropomorphic characters. The latter, to comment on the sexualizing of such characters in our media and how that leads to fetishizing and to replace a ‘gendered’ human as a way to comment on the superficiality of biological ‘sex’ as a basis for defining gender. Both to illustrate how when we replace an illogical structure with more obviously nonsensical characters or ideas the invalidity becomes more apparent.