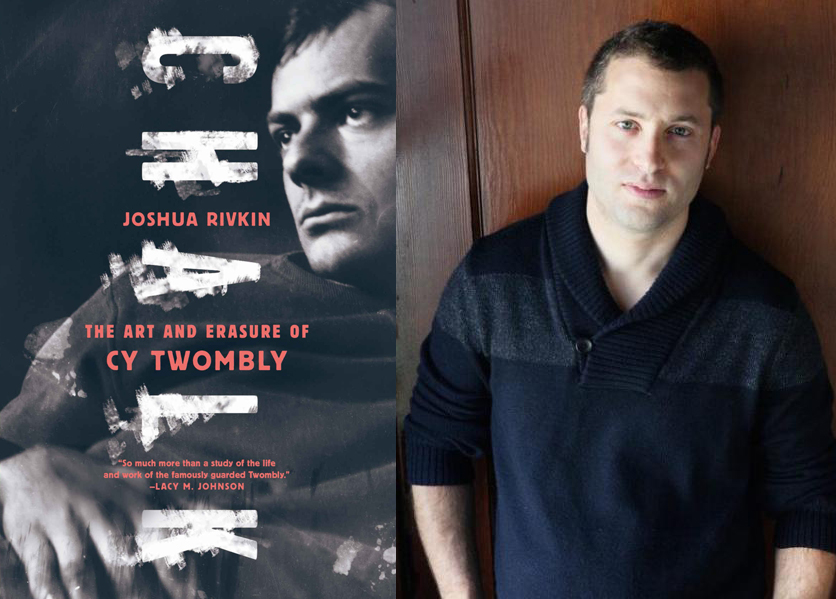 Early in Chalk hints of a fault line emerge, suggestions of a latent tension that will unfold throughout and disrupt the course of Joshua Rivkin’s rewarding excavation into the life of Cy Twombly. An alumnus of Black Mountain College in the 1950s, Twombly was a rising star in New York’s post-war art scene when he set up life in Rome, drifting into a state of self-imposed exile. Though his works now sell for record prices and his estate holds assets in the billions of dollars, he struggled through most of his career for recognition, his art remaining under-appreciated until the decade before his death. With his death, a second struggle has emerged, a subtle one of legacy, marked by silences, omissions and erasures, surrounding the work and the story of the man who made it.

A definitive biography of Twombly has yet to be written, abetted in no small part by the artist’s own reticence to talk of his personal life or his art — he gave only two published interviews and wrote just one early essay on his work. Nor does this book aim to fill that gap. As Rivkin says, it is “stranger, and more personal.” A poet and essayist now based in Salt Lake City, Rivkin became enamored of Twombly’s works in the aughts, when he taught creative writing to children at the Menil Collection in Houston, and turned frequently to the Cy Twombly Wing for visual prompts. Pilgrimages to see more of the work followed, but the art never satiated, and Rivkin ached to delve into the stories behind the art, to grasp the man behind the paintings — which is no easy task according Edmund White, who in Chalk: The Art and Erasure of Cy Twombly is quoted as saying, “[Twombly was] an elusive, cagey man who mumbled and took back every statement he made, just as he erased so many of the words on his canvases and constantly equivocated about his life and sexuality, standing perpetual guard over his biography.”

A decade-long fascination culminates for Rivkin in a Fulbright scholarship to Rome and what becomes almost a lovesick quest, where Rivkin traces the artist’s footsteps, seeks out his friends, haunts his spaces. It’s a personal journey with a public purpose, to excavate the story of the man who remains one of the most enigmatic artists of the last century. In Chalk, Rivkin does an admirable job of fleshing out the life: the early years in Lexington, Virginia; his studies at Black Mountain College; the formative trip, with Robert Rauschenberg, to Rome and North Africa; early years in New York; the return to Rome, where he marries Tatiana Franchetti, scion of a wealthy Italian family; the birth of his son, family life, travel abroad; his trips to the States, for months at a time, to solidify his career; and the final, late flowering of his international reputation.

This biographical scaffolding is festooned with related genres that wind themselves through the chronology like a well-designed Christmas tree: travel writing, detective story, and memoir, as well as exquisite and perceptive art writing, fill out this strange and personal biography. Authors as varied as Roland Barthes, Kirk Varnedoe, Edward Albee, and Rachel Kushner have all found inspiration and engagement in Twombly’s works, and Rivkin manages to weave their comments and analysis into historical and critical context, amplifying the whole with his own insights, delivered in a rich prose studded with flashes of poetry. On one of Twombly’s more famous series, Rivkin writes: “The chalkboard, with its written-over remains, like an absent voice calls back from beyond. This is the magic (and poison) of these pieces, the sense that there’s a secret below, some nearly absent idea, a current or tide, language or lover, humming its mystery.”

The humming mystery emanates from the life as much as the work. The available photographs, both personal and professional, the scant published interviews, a brief film, tease as much as they reveal, “offer and refuse” (as Rivkin says of the paintings) glimpses of Twombly’s home life, his friendships, his sexuality. Rivkin’s year in Rome is a period of searching and waiting, his project a book of “chance” determined by the friend or patron he is able to meet, the villa he manages to visit, the archives he may or may not be granted access to, as Twombly “slips in and out of view, like a buoy on rough waves.”

At the center of this drama stands Nicola del Roscio. “Whatever word, or euphemism, you prefer — ‘friend’ or ‘partner,’ ‘lover’ or ‘close companion,’ ‘archivist’ or ‘editor,’ ‘assistant’ or ‘executor’ — Nicola is the person closest to Twombly, living or dead,” Rivkin writes. “He is the official gatekeeper.” His presence is felt throughout the book, glimpsed early in elisions in the historical record, felt later in the reluctance of Twombly’s friends and acquaintances to speak candidly, and comes to the fore finally in a series of encounters, furtive approaches and retreats between writer and gatekeeper that ultimately end in threatened lawsuits and locked archives.

As Rivkin discovers, stories can be as elusive as art: “fragments without narrative, puzzles without answer. So many uncertainties and dead ends. So many questions and small failures. An education in frustration.” While his patient, loving exploration succeeds in so many ways, the book is charged with the sense of what is unfinished, what is left unrevealed. Since this is what attracts us to the art, we may learn to accept it in the life as well.

Join Joshua Rivkin for a reading and signing of his new biography, Chalk: The Art and Erasure of Cy Twombly at The King’s English, Salt Lake City, Tuesday, Oct. 30, 7 p.m.