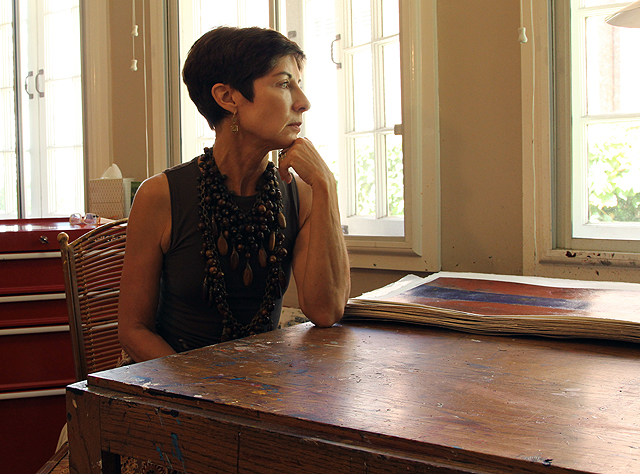 Comfort zones. We all have them. Some get stuck in them. Others use them to their best advantage.  Some, who may be the type to be the most regulated by regimen, habit, routine, and ritual, may have a very tight comfort zone.  Some within this category have the gift of wisdom, and are open to the receptivity of influence, are open to sound council or advice, know truth when they see it, are honest with life and their own lives. This comfort zone becomes a malleable entity to the betterment and propagation of life, happiness, productivity, and balance. This is an apt description of now well-seasoned artist Josanne Glass, who through a series of life influences, and despite describing herself as a “controlled person,” has been much in-tune with the rhythms of life. As a result, she is perpetually achieving greater and greater success as an artist, and as a human being.

Born in Maine and raised across the United States with a military father, Glass attended high school and university in northern California before permanently settling in Utah in 1979. For 30 years she was in corporate America, working in human resources at a number of firms before deciding it was time to leave. “At some point,” she said to herself, “I’ve got to do something with myself.” That was in 2007, and since then Glass has been carving out her own niche in the artistic world, a journey that continues with exhibita of fine new abstract work at The Town Club and Phillips Gallery.

In 2002, when Glass was still working a corporate job, a friend recommended she read Julia Cameron’s “The Artist’s Way.”  She began many practices in the book, the most formative being “morning pages” — three pages of writing she enjoys each morning on her garden bench.  Initially she found herself writing about the same things every day. “At some point, when you keep writing about the same things every day, you’ve got to make a decision,” she says. “You either keep doing the same things over and over and over, nothing’s going to change, or you change.”

Glass looked to art for that change.  She wrote: “I always enjoyed art.  That’s a place to start.  Let’s see where it takes me.”  She saw an advertisement in Catalyst Magazine for art classes taught by Bonnie Sucec, a rare and serendipitous advent.  Glass was traveling to Boston three times a month for work, so she had the flexibility to take Fridays off and took Sucec’s class. For five years.

“In the act of writing, I discovered how important art is to me,” she says. “I made a goal that I would have a show within two years.  In two years I got Chapman Library.  In five years I wanted to be at a place like Phillips or Finch Lane. In five years I had a show at Finch Lane.”

Her show at Finch Lane featured images of people reinterpreted from black-and-white photographs, including “madre,” a portrait in which all elements are reduced to a few simple flattened planes and shapes without depth: tonally nuanced cappuccino background, chartreuse green sweater, a simple shield of swept back chestnut hair, fair ivory skin, strong black angled and linear eyebrows, vermillion red lips.  The portrait is as simplified and reduced in form as Picasso’s “Classical period,” which anticipated his full-blown Analytic cubism.

It was at the time of her Finch Lane show that Glass decided to leave the corporate world behind. She was comfortably prepared for the transition, padded with interests; she had a lovely and charming home paid for, her son’s private education at Reed College in Oregon settled, and she had Leo and Annie, two Welsh Terriers for she and her husband to look after.

Ironically, now that she had more free time, Glass wasn’t painting.
“It was hard at first, but you have to find a life rhythm,” she says. “It took a bit.” She worked one day a week for a friend, and then began working for A Gallery, where she met artist Jeff Juhlin, an encounter that turned out to be a catalytic turning point. Glass had been flying back and forth to California to take care of an ailing mother, and was sketching patterns of the land. When Juhlin saw them he said,”These are really good, keep on going.” She finished 36 of the 9” x 9” works on paper and her life in paint really began. “I needed the inspiration, and the angst with my mother in my life,” she says, “to realize how much I enjoyed making art again.”

Glass describes herself as an extremely orderly and organized person, but when she’s making art something else happens. “Art is the one time where I absolutely lose control,” she says. “I absolutely do not pay attention to the time, do not think, oh my, I have to start supper, walk the dogs . . . the wall by my desk, it is trashed.”

She returned to exhibiting in 2013 with a handful of group shows and a solo exhibition at Phillips’ Dibble Gallery.  It was a turning point, an exhibit that introduced her shift to abstract art. In works like “the conversation” Glass relied on formal elements with a figural allusion, albeit iconic. Glass used a solid plane of cantaloupe orange within which two structures are set, one loosely resembling the other, with rounded, head-like forms and long rectangular shapes beneath, in brick red encased in a raw shadowy darkness.  All areas of the painting are maximized for textural interest, including a swiveled pattern on the orange, and a linear pattern within the red, that echoed the form.  This exercise in formal abandon, executed however with minute precision, would set the stage for her total abstractions soon to come.

“Abstraction just came to me,” she says.  “It just came to me.  As soon as that happened I couldn’t turn it off.  I go to sleep in the night, I wake up in the morning, and I look at the world differently.”

That different gaze is evident in the abstractions that are currently on exhibit at The Town Club and Phillips Gallery. In these works, Glass is motivated by what she can control, yet inspired by those spontaneous elements that are outside her reach—this propels her as an artist, and motivates and broadens her range.  A power sander is her greatest tool, as it finds newness in surfaces and hidden colors and textures.  She works, not with a brush, but with sponges and a trowel, to be at the same time well within controlled bounds, and yet allow for a sense of improbability that will push her limitations.  She might make a mistake, but this is never removed, but incorporated to become a learning tool, as she is forever moving forward as an artist. “Disparate Acts of Being,” is a seminal piece. One can see the conceptual thinking of the artist, an artist who may be controlled and absolutely structured in her life, but who is willing to try new expression, willing to let herself be freed from the absolute. There is a balance to the composition, yet at the same time structural irregularities, and a lack of the absolute, a loss of the precise, a direction towards the unexpected and the unpredictable.

In “Blue Streak” we can see just how the artist is open to influences and honest, most of all, to herself. When she sees a passage where she likes something she has done, she is quick to build on that, and she focuses her work in that direction. Glass is intelligent and she is a learner, always learning, not only from mistakes, but also from progress. This composition is a marvelous accomplishment, both in its quality of color as well as in its structure. Each plane of hue has an intense richness and veining that invites the eye to travel vertically through the planes of color. There is a quasi-viscous quality to the intense honey yellow incorporated with marbled charcoal, or steel blue streaked and pulsating with iridescent opal. The red is shockingly scarlet, enriched with a ribboned ash.  Yet there is an opaqueness to the plane of yellow between the blue and the red that is quite golden; it is not gilt, but the combination and application of tones makes it seem so, and the eye does not travel but relishes in this sonorous hue.

“Unintended Consequences” and “A Point in Time” are two farther leaps forward, as Glass has captured, more comprehensively and effulgently, a sense of color within a sense of sensible structure, the relationships these planes have with one another. These planes are not exclusive entities, but complimentary. Each supports the other as one plane inspires the color of the other, until they cease to be distinct, but exist as one, on one canvas, one unity, different in quality, yet harmonious and together, in presence and articulation of color harmony and being. In “Unintended Consequences” the honey yellow with the high viscosity is a complement to the enriched scarlet on the right, equally as viscous, and in their like presences, they exist together, their color creating a relationship of being.  This holds true in the very powerful “A Point in Time” as the viscous and charcoal tempered yellow is at one with the immense blue that allows the ash to streak through its plane, muting it like inky fingers.

A final piece to consider is “Subtext.” The piece is a tapestry.  Glass has not painted a grid, but has created a cohesive unit of individual elements of color and structure, that comes together magnificently. And this is very much redolent of the life of Josanne Glass, a tapestry of individual pieces of structure and color, that comes together by the force of her will and volition and indefatigable energy to create an astonishing life.  “I need that balance,” says Glass,” and that gives me the creative aspect, but that spills over into how I’ve found community, which spills into family, and it’s pretty cohesive.”

“It feels really in balance now,” says Glass, “It took me five years to find the right rhythm.  I’d always given back and I need to be a part of something bigger and that’s why I’m on the board for Art Access.  That aspect of community, that aspect of creating art, that aspect of family, that aspect of home, the personal aspect of time I spend writing, everything influences the other, and if I wasn’t controlled in getting stuff done, I wouldn’t feel as free to make art.”

When she’s making that art, she’s free to let anything happen. “Break all of the rules,” she says about working in the studio. “It is true that this time around I am not working for somebody else and I am playing by my own rules, and I’m breaking art rules too.”

Like Glass herself, her abstract painting is cohesive, and the structure allows the color to marry, and to give life and fruition to the other, to “spill over,” to complement, to create an abundance, where each element is a viscous unity of exciting yet controlled elements, alive and fecund.  With sensibilities of receptivity and honesty, and eagerness to community, family and otherness, Glass’ life is a well-articulated, intelligently structured, and colorful tapestry, that just keeps getting better and better.