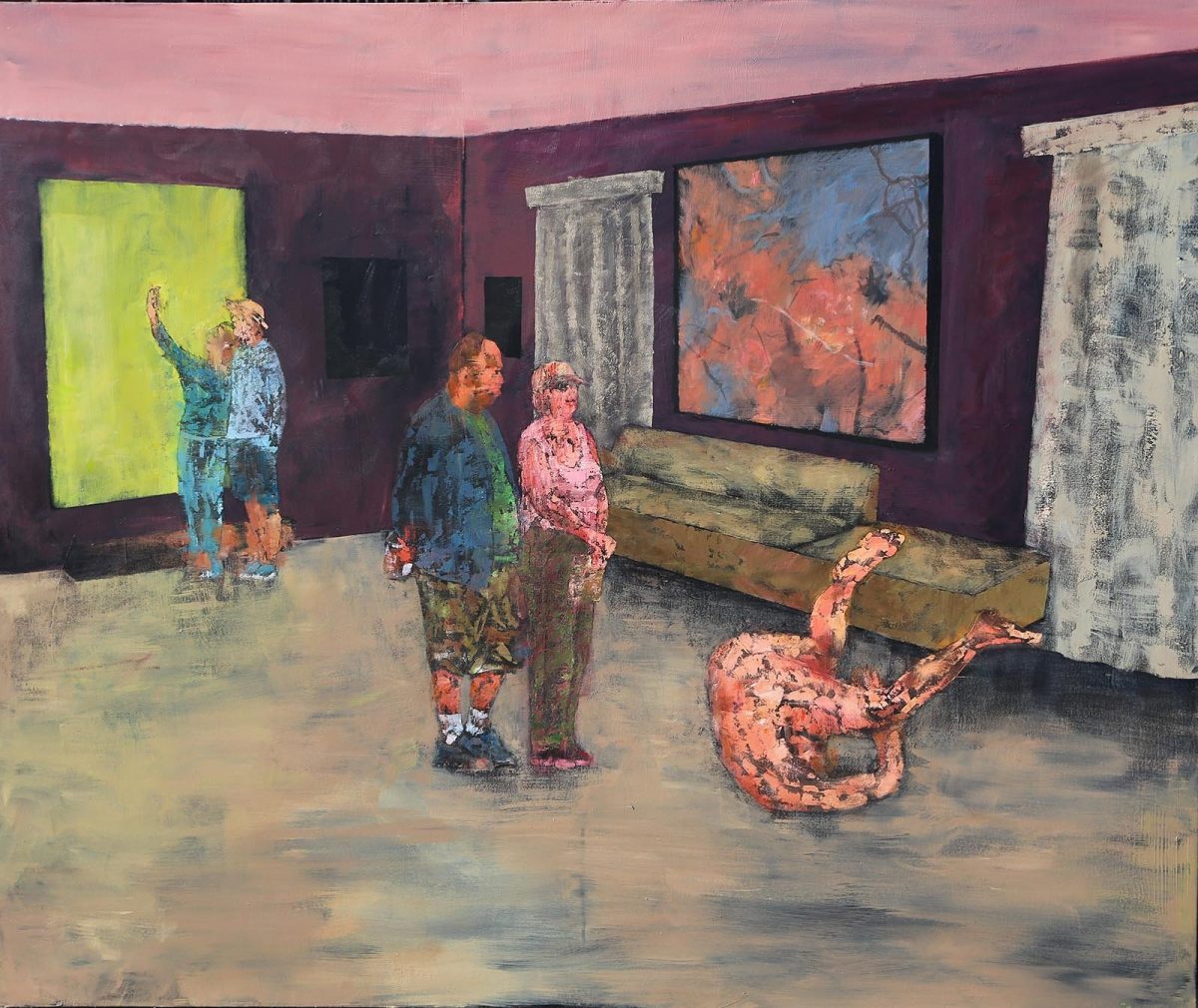 “Here” is always “between there,” just like now is always between then and anyone is between others. Whoever seeks an explanation of what John Sproul’s art says is making a categorical error. It doesn’t render judgments; it illustrates possibilities. Not what is but what could be.

Not all actors are telling a story. Ask that kid shooting baskets and he may tell you he’s just practicing, but really he’s Michael Jordon winning some famous game. Doctors also practice, but for them that’s what’s real. John Sproul is a practicing artist; he also does it for real.

There are five very large paintings of untitled scenes in Here Between There, which together fill the Street Gallery at UMOCA. The fifth and last one contains a clue to why they, and we, are here. Here, that is, between the gift shop and the design show. Stage right, in back, a couple — the tall one in shorts and a hat, the short one making a broad gesture, apparently pointing — appear to be in a gallery (!) admiring a large, yellow painting. In the center stands another couple, the man apparently listening to the woman, who might be commenting on the nude person who lies supine, with legs lifted, before them. They pay no more attention to the naked gymnast than to the other painting, hanging just to their left. The painting we share space with, as opposed to the ones they see, might be about varieties of witness, or for that matter, witlessness. If so, it’s not limited to the two couples; it also indicts us. 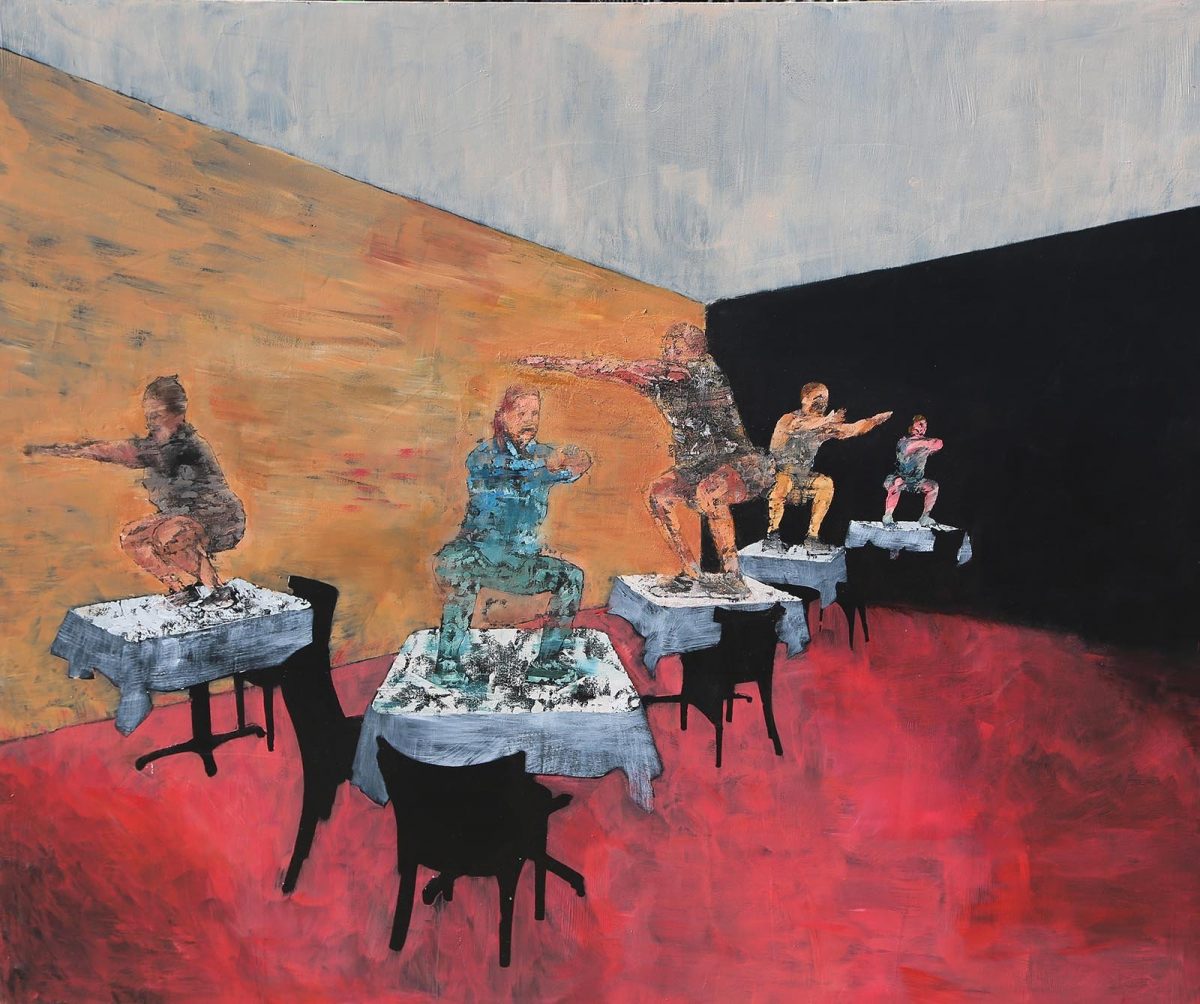 If there are four witnesses in the fifth painting, there is none in the first, which faces it across the gallery. Here, in another interior space, this one more suggestive of a restaurant than an art gallery, five men squat on an equal number of square or rectangular tables, extending their arms in similar but not identical gestures. But for their pedestals/tables and their lack of simultaneity, they might be part of a yoga or aerobics class. They don’t lack witnesses, though. Presumably, they’re watching themselves, somewhere in the range between meditation and egotism. To be the hero of their own stories doesn’t require they all tell the same story, or any story for that matter.

There’s more than a bit of musical theater in the middle picture, one of two taking place out of doors. Its eight figures are divided like synchronous dancers — three, three, and two — with the three in the middle distance further divided into two on one side and one on the other. Their composition clearly includes the deliberate mathematical qualities of symmetry and rhythm. Attention must also be paid to one of the artist’s more distinctive properties: his surfaces. Over the course of at least three distinct bodies of work, while Sproul’s figures have generally been anatomically correct and in proper, realistic perspective, he has reinvented their exteriors each time. Here, the skin or clothing comes closest yet to representing fully-rounded, three-dimensional bodies. Yet on close examination, they can be seen to consist more nearly of expressionistic daubs of color. In other words, while they appear solid at first, they really are not cohesive; they can be seen through. Nor, for the most part, are the places in which they appear any more solid. The closest to an exception is the black scrim, so like a stage set, that runs behind the figures. The sky, which may be a wildfire, nevertheless seems almost as solid. The putative concrete wall, by comparison, looks like what it probably is: white paint swirled over black in a manner that recalls the brushed surface of a modernist, abstract, stainless steel sculpture. Its metallic character comes from the fact that light penetrates it before reflecting back to the eye. 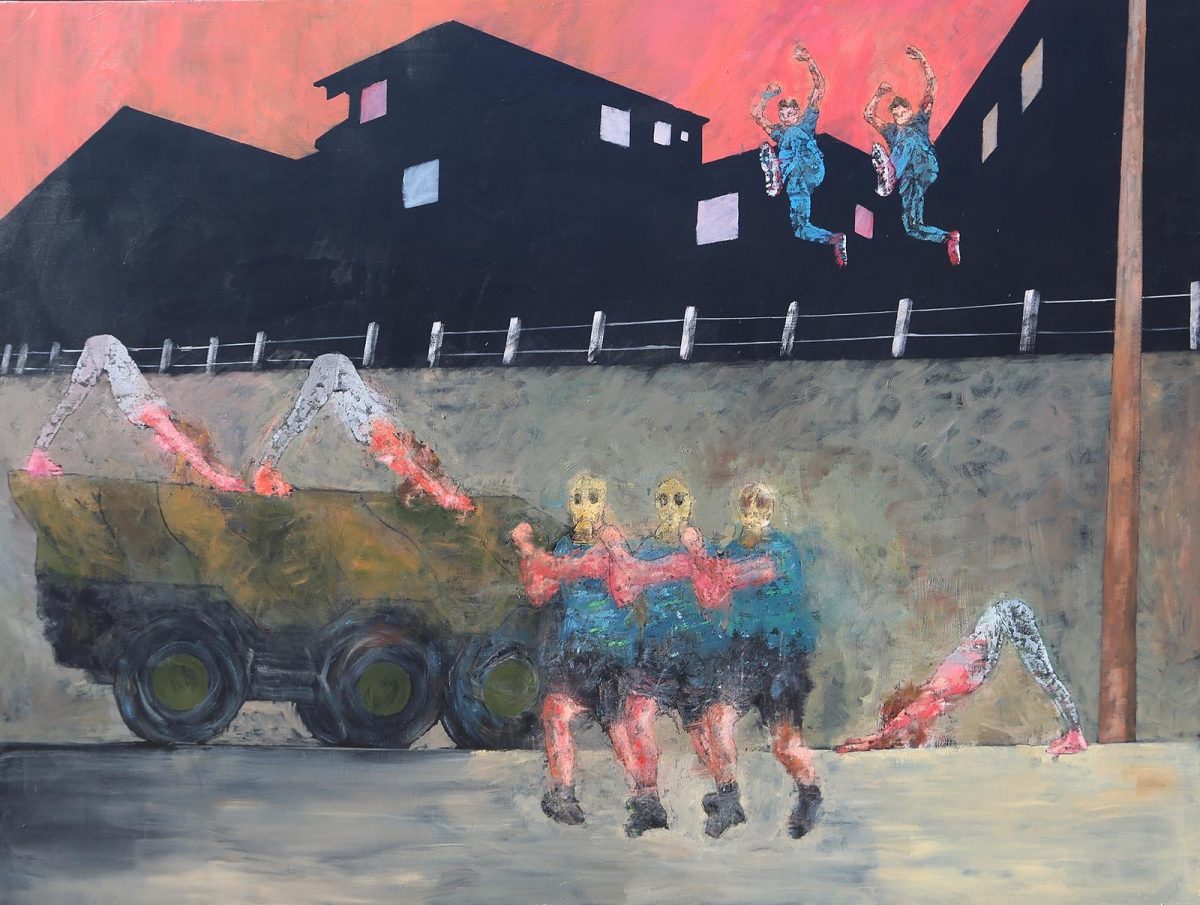 What’s truly remarkable about the composite surfaces that locate and describe the figures and solid objects in Here Between There is what complete control of them Sproul displays. In the second painting, the playground merry-go-round lies absolutely horizontal, pinning down the brown ground beneath it, while the green behind it ambivalently rises up until it meets the gray band, whereupon it falls down, then starts to rise again. This unstable, active band above the solid earth opens and closes around the figures on the ride, which, like all the occupants of this world, are nervously active.

A final thought about this quality in the paint application: from a scientific point of view (rather than a human sensory experience) there are no truly solid objects. Maybe a neutron star has no internal space, but everything on earth does. The way John Sproul paints the objects in Here Between There makes them appear solid when viewed casually, but honors the limits of their physical reality. It also acknowledges their uncertain identities: we know more about where they are, relatively speaking, than we do about what they are. That said, they are rich opportunities for theoretical speculation in any medium, including — especially in the work of an artist — paint. 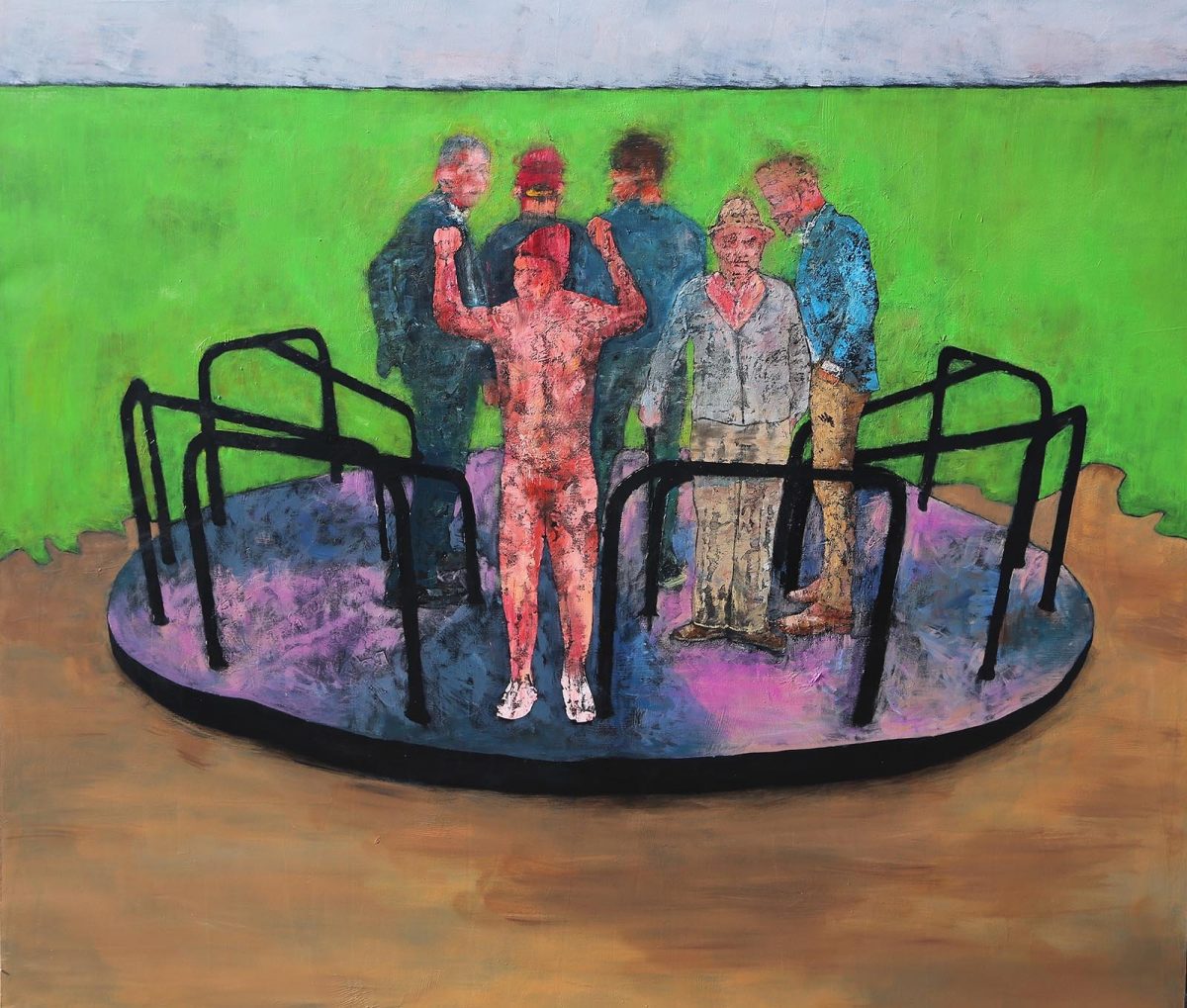