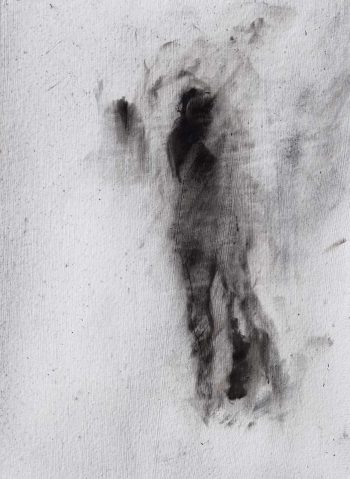 On Friday, September 17th 2021, The Utah Division of Arts & Museums will hosting the opening reception for the exhibition Brother Be Gone by John Sproul at The Alice Gallery. The reception will be that evening, during the Salt Lake City Gallery Stroll, from 6-9 p.m.

This work comes out of a great loss that I suffered, endured and continue to endure of my closest friend, Dave Allan, who I have known for more then 30 years. Dave was diagnosed with stage 4 Melanoma cancer 2 1/2 years ago and died a few months later. This work began shortly after that as I needed to “talk” through the grief that was in me. As time went on the work moved from this specific loss to include all experiences with loss. The loss of a child leaving home; of youth; of what could have been; of choosing one thing over another; of one idea or state as we move forward into another, and so on.

I do not see loss as negative, but rather as a powerful experience that is necessary for growth. It often is a balance in life and is something to share and walk through, not to be held onto to hold us down. I have been through a lot of loss in my life and much good has come of it. Was the good that came out of Dave’s death worth the loss, was it balanced out – definitely not, but the 30 years of having such a beautiful and close relationship more then does and the loss of it makes it very clear of how important he is to me, and I will have that with me the rest of my life.

This exhibit is dedicated to Dave and to those of us who have lost, namely, all of us.

John Sproul has been a professional artist for roughly 30 years and has been actively involved in the art community.  He recieved a BFA from the University of Utah in 1993.  He has exhibited throughout the United States, (including New York and extensively in Los Angeles), parts of Europe and Malaysia.  Some of the venues he has exhibited in include the J. Paul Getty Museum, the Utah Museum of Fine Arts, Utah Museum of Contemporary Art; The Painting Center, New York; the Bipolar Projects in Barcelona; Galerie Metanoia in Paris; The Kunstwerk Carlshutte in Germany; and the Sienna Art Institute in Italy.  As an advocate for the arts he served on the Utah Museum of Fine Arts’ FOCA Executive Committee from 2006-2013 and was Chair in 2013.  He co-founded and directed the Art Group (2007-2015, 2019 – present); founded and directed the Foster Art Program (2009-2011, 2021 – present); founded and directed the Utah Contemporary Art Think Tank (2010-2011); and currently owns and operates Nox Contemporary Art Gallery (a project oriented, non-commercial gallery).