John Erickson: Ready to Do Some Real Damage 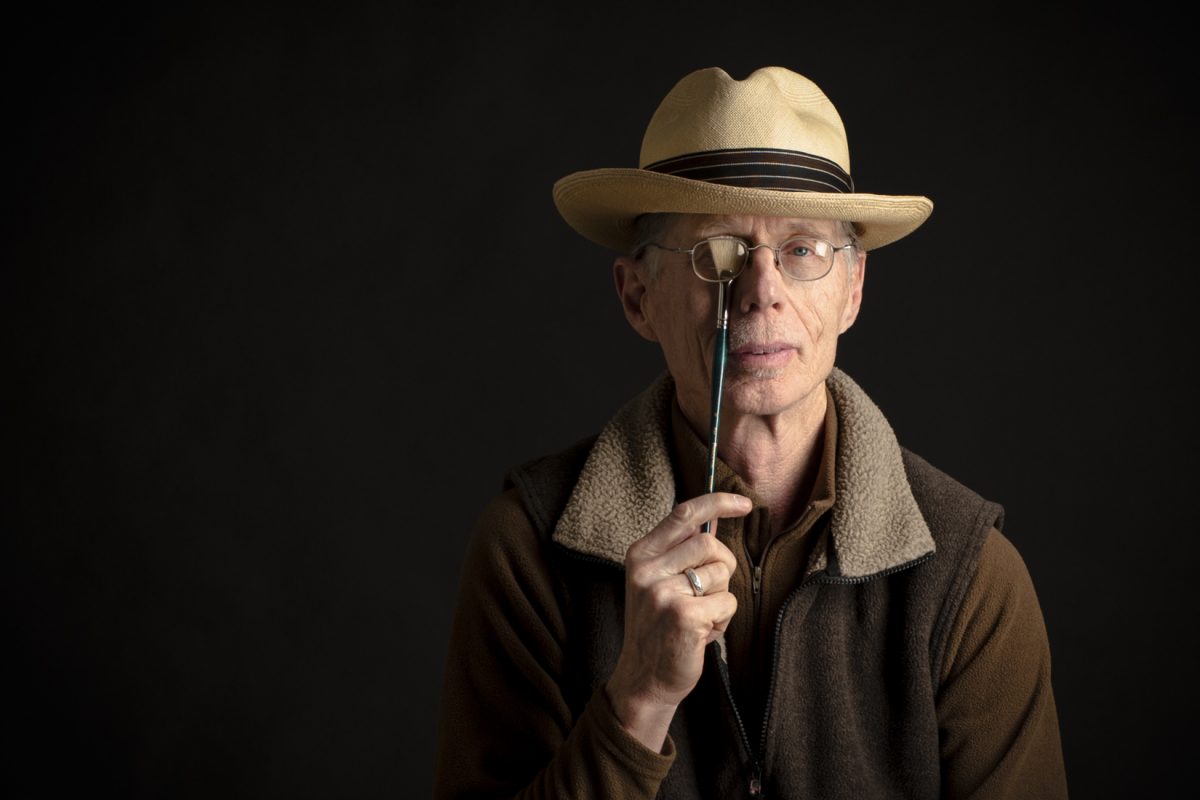 In early 2012, the Gittins Gallery in the University of Utah’s Fine Arts building featured an exhibition of drawings and paintings of a single male model with gaunt face and bony hands. What made this exhibit particularly unusual was that the model was art professor John Erickson. Aerin Collett, the student who curated the exhibition of works by current and former students says, “He is aware of his own structural features that allow the eye to see the fundamental structure of the human form; he is a tool for the beginning artist to learn anatomy through him both verbally and visually.”

Though the model was the same, the resulting drawings and paintings were individually expressive. That’s exactly as Erickson would want it and testimony to his value and influence on students for the past 30 years.

An assistant professor at the University of Utah, Erickson treats his classes like a research lab; he might be looking for a cure for the mundane while inoculating his students against their native cultures. He takes his experiences in this laboratory back to his studio and adds to his own visual vocabulary. In genuine humility he may tell you that he never much envisioned commercial success as an artist. Yet, that is exactly what happened.

As teacher/artist, the 60-year-old Erickson is the role model for the stay-true-to-yourself artist with no desire to be a commodity for the masses. Yet, at this stage in his life and career, he proves this model can work – maybe not for everyone – but for one willing to work hard in the lab, evolve, and wait for that day of convergence when all of a sudden your vocabulary is attractive to collectors and dealers.

And perhaps his abstracted mixed media paintings have served to educate art collectors as well as students. Whether displayed at Phillips Gallery, the Utah Museum of Fine Art, Springville Art Museum, Coda Gallery, or other venues, viewers may wonder at the juxtaposition of an apple hanging from a string in a portrait or a cat strolling through a figurative painting. And they may wonder about his rough combination of latex paint and torn pieces of magazine pages, along with the realistic rendering of an eye or nose in oils. Encase all that roughness in a shiny coat of resin and the painting becomes more accessible to collectors eager to be a bit brave, maybe to demonstrate their sophisticated art taste to friends.

No doubt there’s an audience ready for Erickson’s work. Two years ago, Phillips Gallery displayed Erickson’s series of “big head” portraits – up to 3 x 4 feet in size. Ultimately, the gallery sold about eight of the collection. Coda Gallery in Palm Springs, Calif., exhibited more paintings from the same series and sold six in two days.

Since then, Erickson has embarked on a different kind of portraiture: dogs. In typical Erickson fashion, he stays true to his vision and his own vocabulary while trying to serve the needs of the clients who commission his work. He makes house calls to meet his subject and gets a feel for the dog’s personality and relationship to the owner. While there, he looks around at the owner’s art collection. “How much abstraction can they stand?” he wonders.

When the director of the Coda Gallery in Park City saw a couple of his dog paintings in 2012 in Helper, she asked if she could take them back to the gallery with her. Within three weeks she had sold both and requested more.

Despite his success with three galleries, currently, and with about seven commissions in the past year, Erickson says, “I almost feel like I’ve just done the foundation program, mastered a few fundamentals. I feel very much like I’m just getting warmed up. I hear other people my age talking about backing off, retiring. I don’t feel that way. I feel like there’s now a window of opportunity to do some real damage, create some surprises.”

What direction he takes next may well depend on what happens back in the lab. He teaches life drawing, figure drawing and painting, figure structure, heads and hands, and landscape painting. He teaches some classes in the fall, others in spring or summer. The amount of curriculum he has created in 30 years of teaching amazes even him. “At the same time, I never felt like I’ve arrived or become part of an institution,” he says. “I always feel disenfranchised, which I think is essential to the way I operate.”

This isn’t just humility speaking, but a never-ending desire to find just the right method to “destroy” students’ lives. Not literally, of course, but this is a good example of “Erickson, the philosopher,” who sometimes makes students wonder if it’s a drawing class or a philosophy class they signed up for.

Former student Amelia Sardoni says of her first class (figure structure) with Erickson, “I honestly didn’t understand a word he said; he seemed to communicate in riddles. Looking back I realized I expected someone to tell me what to do and explain to me how to get an A. John never did that. He explained ‘gestalt’ in more complex ways than its actual definition by exploring it with every student individually.”

Alex Morris, another former student also notes Erickson’s individualized teaching methods: “He can adapt when faced with a unique learning style and has a keen eye for who in his class might need a little more attention versus one who needs space to flourish. Like two colors of the same value placed side by side, John places himself on the same level as his student and both advance the painting of their careers, paraphrasing what John would say, to the point where the tension is exquisite. I always knew that when I took a class from John that by the end of the semester I would have evolved in my understanding of the figure, advanced my technique for mark making and come out of it more independent and confident of my own voice as an artist.”

Erickson likens his teaching strategy to a rebirth. “I think I need to rebirth them so that their old social conventions are destroyed,” says Erickson. “You become an outlaw to your own socialization. Which can become lonely. As a teacher, you take that loneliness and domesticate it a bit.” That’s how collage entered his lab.

After teaching figure drawing much like other professors, with an emphasis on planes, angles, and point-vector processes, Erickson found students either resisted or didn’t comprehend. They continued to draw with curved lines and shading, as they had in high school, without fully comprehending the underlying structure of the form. Erickson needed something to jar them out of their old processes and ways of seeing. “What can I do to invade someone on a deeper level?” he wondered. “What can I do to revolutionize their seeing process that kind of leaves them questioning their current world view?”

With a magazine, scissors, and glue, students were reborn. And Erickson’s own work in the studio was transformed as well. “Collage came in as a passive-aggressive way to jar them out of their patterns. Then I realized I should do this myself. That’s where teaching has been rich. You see what students do and say, ‘Yeah, that worked. I would never have done that on my own. I can’t wait to take it back to my studio.’”

But it’s not just the use of mixed media that characterizes Erickson’s work and challenges his students. It’s a way of seeing, imagining a different reality, and incorporating that into a work of art. From his own art education – University of Utah and Yale University – he has been influenced by artists of the Renaissance, Impressionist, Modernist, and Post-Modernist periods.

He can pick and choose, combine or emphasize any of those influences in his work. And as he teaches, he’s never without an armload of books relevant to the needs of individual students. “I’ll bet you’ll identify with this artist,” he might say, handing a book of Fairfield Porter paintings to a student.

He encourages students to think about whether they are working from a linear-sequential mode or a random-abstract mode. “Do you want to document what you see?” he asks a landscape painting student, “Or do you want to experience it from the subconscious?” And if this kind of thinking is new and strange to some of his students, Erickson can usually demonstrate what he means by showing his own work. Not that he wants or expects students to copy his process or vocabulary, but words cannot quite express “slippage from one reality to another” the way an Erickson painting can. And just talking about the formal elements of design doesn’t quite have the impact of seeing it in an Erickson painting. Nor does “the materiality of the paint” totally make sense until you see it in his work.

An Erickson portrait – dog or human – is not your typical portrait. It’s the artist’s own way of seeing right now, after all those years in the lab, and all those influences from historical and contemporary art. “At this point my process is so convoluted, it is what it is,” says Erickson. And that seems to be just fine with his galleries, his customers, and his students.