Salt Lake City artist Joe Venus has worn many hats in his life, but the ones he has most desired are the cowboy hat and the artist’s beret.  Throughout his exciting life, Joe Venus has been a stock car racer, rattlesnake tamer, rodeo cowboy, arts organizer, and artist, fulfilling both of his boyhood dreams.  But he has not been content just to fulfill his own dreams.  Through a scholarship he is helping others fulfill their own dreams of becoming artists.

Joe Venus was born in New Kensington, Pa in 1936, where the Pittsburgh steel mills were his playground. Although Joe was born a city boy, he dreamed of being a cowboy in the wild west.

In school Joe demonstrated his artistic talents and love for the wild west. He was reprimanded by many a teacher for his doodling of cowboys, indians and horses on his assignments. His art drawn on math exams or spelling papers was not always appreciated by his teachers, but it was his creative destiny that would ultimately determine his future.

Joe began the path that would ultimately lead him to fulfill his dreams of becoming an artist and a cowboy in Omaha, Nebraska where he studied Taxidermy. He graduated with  his certificate in Taxidermy from the Northwestern School of Taxidermy in 1954. After Graduation Joe’s next challenge was joining the stock car circuit as a member of the Pittsburgh Racing Association. Joe drove his own stock car four nights a week at racetracks throughout Pennsylvania. His competitive spirit moved him from stock cars to the sprint car circuit. While building a super-modified t-bird Joe met his future wife Shirley Ann Clark, who encouraged Joe to continue his pursuit of a career as an artist.

Joe settled down for awhile. He spent his time between painting and drawing before he was faced with his next adventure  — Rattlesnake Hunting.  Joe became a member of the National Rattlesnake Association,  participating in the annual rattlesnake roundup in Morris, Pennsylvania. Snakes captured by Joe were donated to the Highland Park Zoo in Pittsburgh. Because of this unique hobby, Joe was often invited to speak and share his films.  In 1970 Joe took a trip to the mountains of Utah where he fell in love with the majestic mountains and western lifestyle.

Two years later Joe and his wife Shirley moved their family to Utah.  In Utah Joe had the opportunity to turn his boyhood dreams into a reality. He became a cowboy. With his big palomino horse “Tommy Wig Bar” Joe rode with the Ute Rangers, the Utah Highway Patrol Auxiliary Drill and events team, from 1974-1980. Joe Performed at events across the Western states, became an accomplished rider and shared his knowledge with a 4-H riding club, Called the “Thunderbirds”. Later Joe also become a member of the Salt Lake City Police Palomino Posse. This opportunity enabled Joe to share his skills with others. Joe came even closer to being a cowboy when he became a member of the Days of 47 Rodeo committee.

As a member of Days of 47, Joe was able to not only share his horsemanship skills, but his artistic talents. He produced the entire book, designed and painted the cover art for the days of ‘47 Rodeo. In 1999, Joe designed the three new logos that replaced the older rodeo insignia. He continues to be an integral part in the Rodeo. His art has adorned over twenty annual covers of the Days of 47 Rodeo book since 1980 and also regularly appears on the cover of Colorado Cowboy Magazine.

Joe Venus also served for many years as Chairman of the Days of 47 Western Heritage Invitational Art Show.  He recently had to resign this position to complete a 40 x 8 foot mural for the CEU Prehistoric Museum in Price Utah, but he remains Director of the Days of ‘47 Rodeo fine arts show.   For the past 8 years, he has also served as supervisor of fine arts at the Utah State Fair. An integral part of the Utah Artist community and a proponent of art being able to be viewed by all, Joe has kept the Days of 47 Rodeo and Utah State Fair Fine Arts exhibit ones that feature art that can be viewed by the entire family. You will not find lewdness here. The art is a statement of talent rather than of politics. Joe Venus has given opportunities to fine artists that are just not available for artists who do not espouse the Mapplethorpe crowds mentality.

Joe Venus’s involvement in the arts is spurred by his personal creative endeavors.   With the Rodeo under his belt, the award-winning illustrator and painter then immersed himself in the history of the Western landscapes, culture and animals. Joe Venus, captures and creates on canvas wildlife in their natural setting.  The wisdom of mature animals with a cautious and sensitive approach of everyday survival is an important feeling that is significant in each painting. Feelings of wildlife curiosity, vision, listening to unnatural sounds, contentment at rest, dominant power of authority and prowess are components that are key elements in wildlife art. Sensitivity and respect for wildlife and a deep feeling of compassion for vanishing wildlife is another factor for recording wildlife on canvas. The many species of wildlife on the brink of extinction will be preserved by the brush and canvas of the wildlife artists of today.

While I looked over some of the photos of Joe working with wildlife on location, Joe told me that he is a big cat fan, remembering his visits to the Pittsburgh Zoo sketching the wild felines.  Joe works with many live critters. He wanted the “real deal” so he met with Kodiak bear BART, which stands 9 1/2 feet tall and also was the star of the 1989 movie, “The Bear”.  The bear’s trainer placed a rock on the ground where Joe stood, then commanded the bear to charge Joe and stop at the rock.

“Did it make you nervous I asked?” His wife interrupted, “It made me nervous.” She then showed me pictures of a mountain lion in her living room, sprawled out on the furniture. “You can feel the weight of the bear coming at you” said Joe. “But it is part of capturing the authenticity of the situation.”

Joe is also a soft-spoken man who enjoys the rich culture of the Southwest. His art has brought together the earlier, less busy time. Some of his prints depict early American Indians propped next to photos of the valley during its industrial heyday at the turn of the century.  His art takes us on a journey back in time to a prehistoric era, when the history of man was documented not by pen or pencil on paper, but by chisel and hammer stone on the towering rock arms of Mother Earth. Venus’ paintings capture the history and soul of Utah’s first artists – the Fremont Indians. In The Fremonts 300 A.D and 1300 A.D, he captures the beauty and simplicity of this ancient culture, when they inhabited Nine Mile Canyon near Price, Utah. 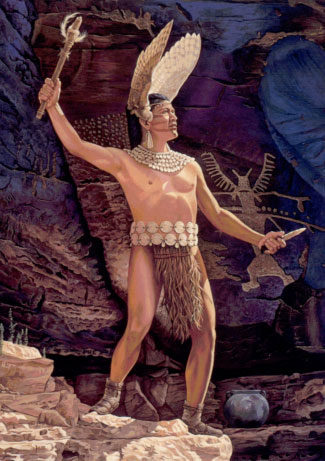 Shaman of the Bird Tribe

Joe Venus, artist and admirer of the Fremont artisans, has spent years learning about this culture; from researching at the College of Eastern Utah Prehistoric Museum, to exploring canyon dwellings and sandstone petroglyphs, all that remain witness to this vanished society.

Joe Venus has had a full and exciting life.  He has been able to fulfill his dreams and he wants to help others fulfill their own and so created a scholarship fund.  The Joseph Venus art scholarship is a full tuition, complete home study course from the Art Instruction School on Minneapolis, Minnesota. Art Instruction schools has been training artists since 1914.The Alumni include,  Arnold Friedberg, Clark Bronson, Valoy Eaton, and of course Joe Venus.

The Joseph S. Venus Art Scholarship is valued at over $2,285, which covers the tuition for the course. The course focuses on refining the student’s skills in the area of illustration and design. All Amateur artist’s who submit work to the Utah State Fair are eligible for this scholarship. Mr Venus juries scholarship entries. The scholarship is awarded to one of the juried entrants. Entries are displayed annually at the state fair in the Bonneville building.

This article appeared in the October 2002 edition of 15 Bytes.