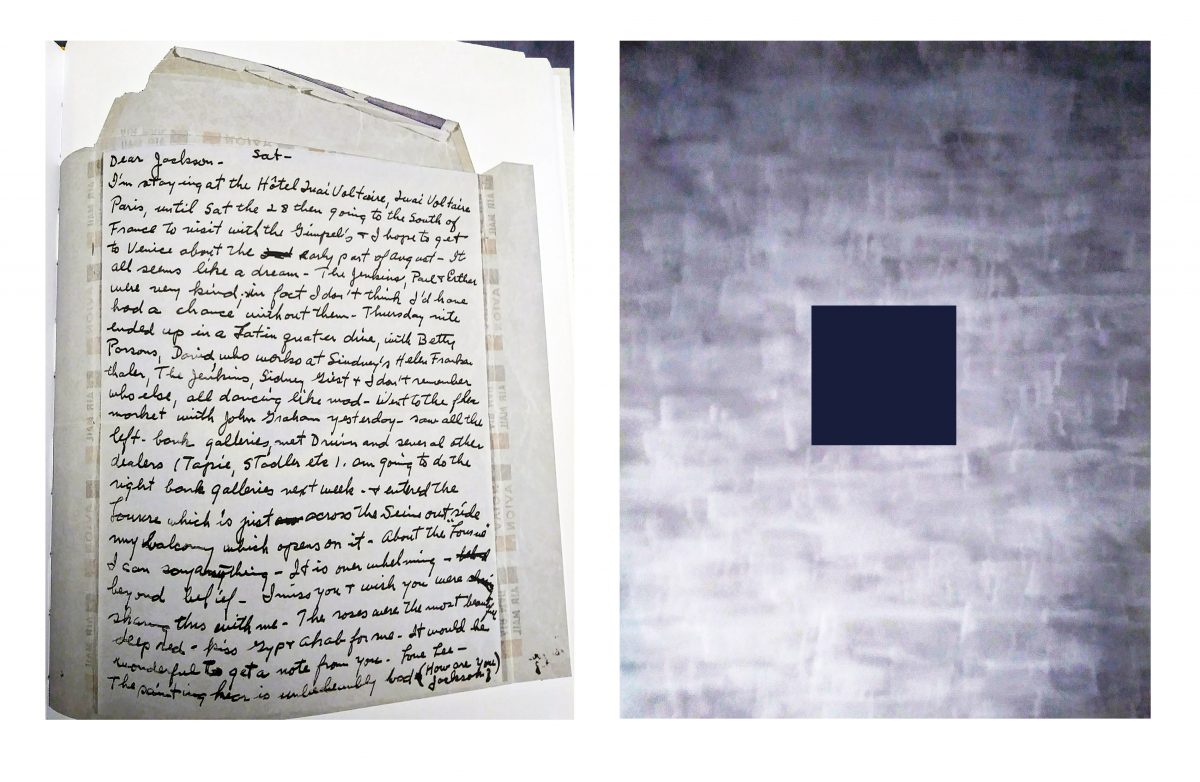 A pair of photographs includes a full-page copy of a hand-written letter. Dated “Sat” at the top of the sheet, it’s addressed “Dear Jackson,” followed by travel notes of a visit to Paris, with added plans to continue to “the South of France” before continuing on to Venice. Most of the details concern visits to art galleries — left bank last week, right bank next week — during the day and dancing in the Latin Quarter at night. A first visit to the Louvre prompts strong emotions: “I can’t say anything — It is overwhelming – beyond belief.’ The letter ends, though, on a different note: “the painting here is unbelievably bad,” which comes as a surprise until the signature is puzzled out. “Love Lee.”

It’s a letter from Lee Krasner to Jackson Pollock, who in their day were the two most influential artists in New York, which in turn had become the international center of art. Their importance can be measured from the care taken with the letter, which on closer examination is bound, along with its envelope, into a book. Krasner and Pollock were said to have a tempestuous marriage, but her tone here tells a different story: “I miss you and I wish you were sharing this with me” and, squeezed into the margin, “(How are you Jackson?)”

This is one side of “Constructive Narratives 11,” one of 21 pairs of photos taken by Joe Marotta, within which he found aesthetic connections that led him to frame them together. Many have a further link in the form of a geometric figure added later. In the case of number 11, the connection may be hard to spot, since the other photo appears blank at first: just a grey texture. But the way it handles light also suggests it’s of a sheet of privacy (or “bathroom”) glass that admits light but blurs the view. Public vs private are also the poles of the letter, which is also a window, one that permits an intimate view into a public relationship. If this reading is even close, the small black square the artist added to the larger grey square reinforces the concept of “window.”

Sometimes the connection seems unmistakeable. In “Constructive Narratives 20,” a café like the one famously painted by Van Gogh tilts to the right, bringing its visual energy into alignment with a European-style road marker — a painted swoosh — in the foreground of the other photo. The transparent purple rectangle that couples the two images could be a visual hyphen, or it might connect the three horizontal roadsigns that resemble the Greek letter “xi,” or the mathematical sign for “equivalent,” which is also a photographer’s term, to the hash marks on the road.

It hardly matters that the individual works are titled “constructive” while the accompanying signage and statements say “constructed.” The difference depends on which way one looks through time. Having created the pairs, Marotta might say he “constructed” 21 stories, while if they’re seen, as he intended, as raw material for the imagination of the viewer to work with, they are “constructive.” Either way, there are hundreds of everyday details to be found among the places the photographer visits in France and Italy, and so many thousands of potential links. No. 10 juxtaposes a woman’s formal portrait with a studio shot of a camera and backdrop, thus deconstructing her image as was first done by artists like Rembrandt and Vermeer to show its artificiality — and how it creates a new reality. In no. 13, Jewish memoirist Maria Stepanova’s “In Memory of Memory” is seen through a crystal-clear bookshop window, while in another window, obscured by glare and smears of who-knows-what, an image of the photographer taking a picture of his own reflection can barely be made out. 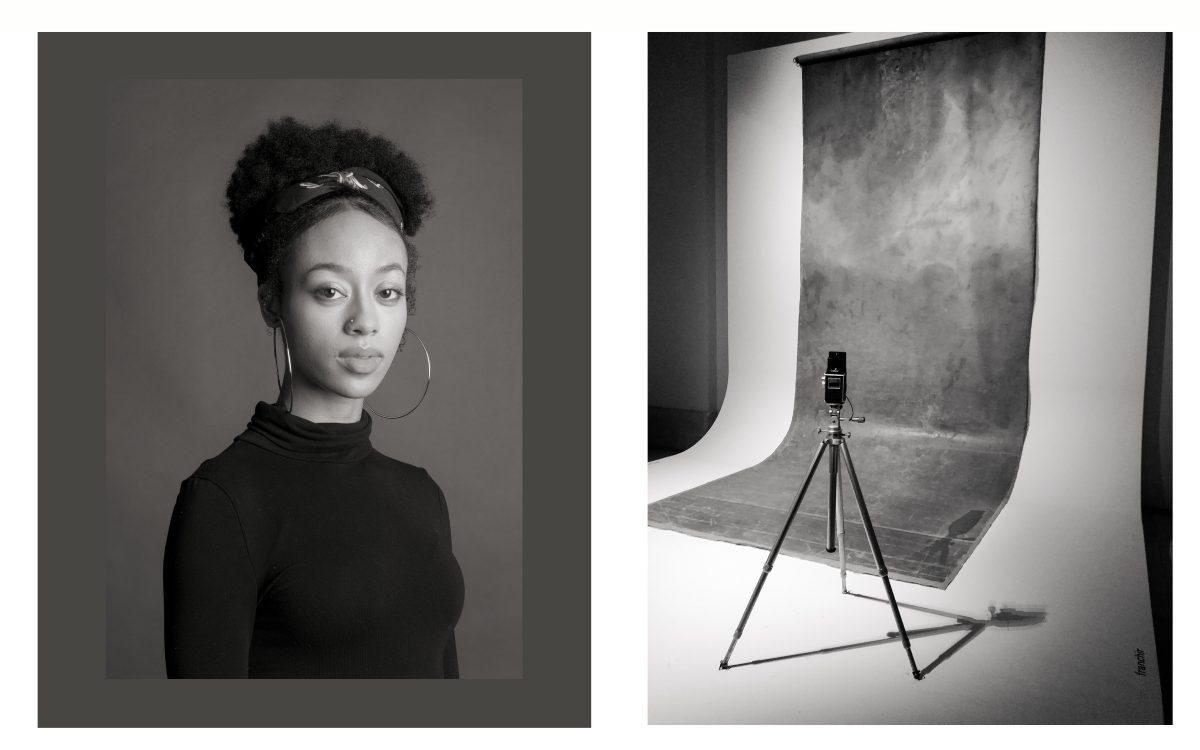 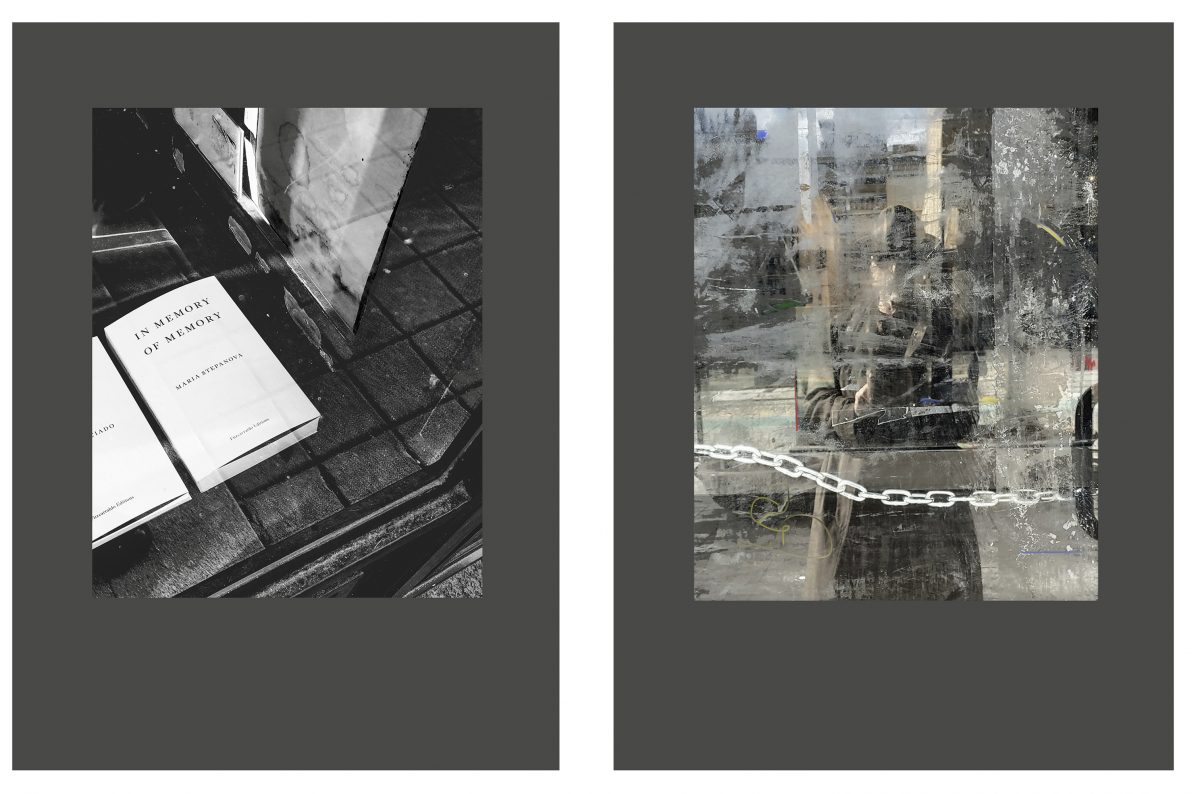 Marotta’s subtitle, “The Plague Years,” further extends his invocation of memory back into history. It needs no explanation, though he does begin his statement with two quotations that bracket his purpose. In one, James Joyce says that he writes so readers can “supplement what they read with their own imagination.” In the other, Roland Barthes describes his work as “rewriting” himself, which could also describe a photographer’s rearranging his pictorial memories to bring out things he didn’t see until later. It comes as no surprise that as popular and celebrated a teacher as Marotta has the precise words on hand to explain his art. One photo is an instant in time: “the exact instant,” according to a century of photographers. Joe Marotta gives his audience two moments, and in the space between them, argues that memories, whatever form they take, are the nourishment of imagination.