The Utah Division of Arts & Museums has announced the recipients of their 2019 Utah Visual Arts Fellowships: Jim Jacobs of Ogden and Shane Deeter of La Sal.

Each artist will receive a $10,000 fellowship to recognize their work and encourage further development.

Jacobs, a retired art professor who taught at Weber State University for decades and exhibits regularly in Utah galleries and institutions, is well known to the state’s visual arts community. His sculptural works, which frequently graft found and processed wood, are part of an aesthetic project that, as Geoff Wichert described it in a 2018 review, “has been to capture change, in all its forms, within a single image: at once both a snapshot of the instant and a landscape of infinite time.” 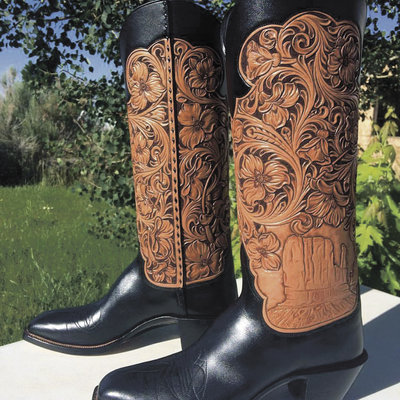 By contrast, Deeter, a leather craftsman known for his finely worked saddles and boots, comes from outside Utah’s normal fine-arts circuit. He grew up on a ranch and worked at his father’s boot and saddle repair shop before attending Utah State University, where he made custom leather goods to help pay for his education. Since 2000, he has turned it into a full-time job, and he has won several awards for his work. He says he plans on using the funds to further his skills by taking silversmithing and engraving classes.

Laura Addison, curator of North American and European folk art at the Museum of International Folk Art in Santa Fe, New Mexico, was this year’s juror. She cited “depth of vision over time, exceptional craftsmanship, a well-articulated conceptual framework, the potential of shaping one’s field for future generations of artists,” as criteria for her selections. She also noted that she feels “compelled to recognize and affirm that human creativity appears in diverse forms, whether folk or traditional arts, crafts, art, design or any other category one might imagine. These diverse expressions of an inner need to create are what I sought to convey with this year’s fellowships.”