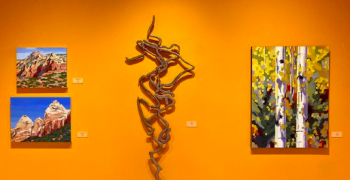 Jim Frazer studied painting with Fairfield Porter while an undergraduate at Amherst, after which he studied photography with John McWilliams while in graduate school at Georgia State University in Atlanta. With colleagues from Georgia State, he helped to start Nexus, a nonprofit photography gallery that later became The Atlanta Contemporary Art Center. He was the first photographer to have a solo exhibition at Atlanta’s High Museum of Art, and his hand-colored photographs of Southern landscapes were widely collected and exhibited both regionally and nationally.

After moving to Salt Lake City in 1999, he branched out from photography to a diverse practice that focuses on mixed media works, collaborative installations and book arts. In this exhibit, his Glyph series (wall sculptures), though not appearing photographic at first glance, is nevertheless photo based, deriving from images of the mines and galleries created by the activity of wood-boring and bark beetles, according to the artist.

Hadley Rampton‘s work rests somewhere between abstraction and realism. Her paintings are an amalgamation of her love of composition, color, mark-making and being present in the outdoors. “I prefer to work onsite where I not only see the scene before which I stand but feel its light, weather, and mood.” According to Michele Corriel, in Western Art and Architecture 2015, “In plein air painting, there is an immediacy that takes hold and guides the process. Rampton grabs hold of that energy but also combines it with a more contemplative studio approach. Painting with a palette knife using bold strokes, she breaks her subject matter down into simplified form, composed of value and color.”

Drawing and painting for as long as she can remember, Rampton graduated with honors from the University of Utah in 1999. During her studies, she spent a semester in Florence, Italy, at the Instituto di Lorenzo d’ Medici studying studio art, Renaissance Art History and Architecture.