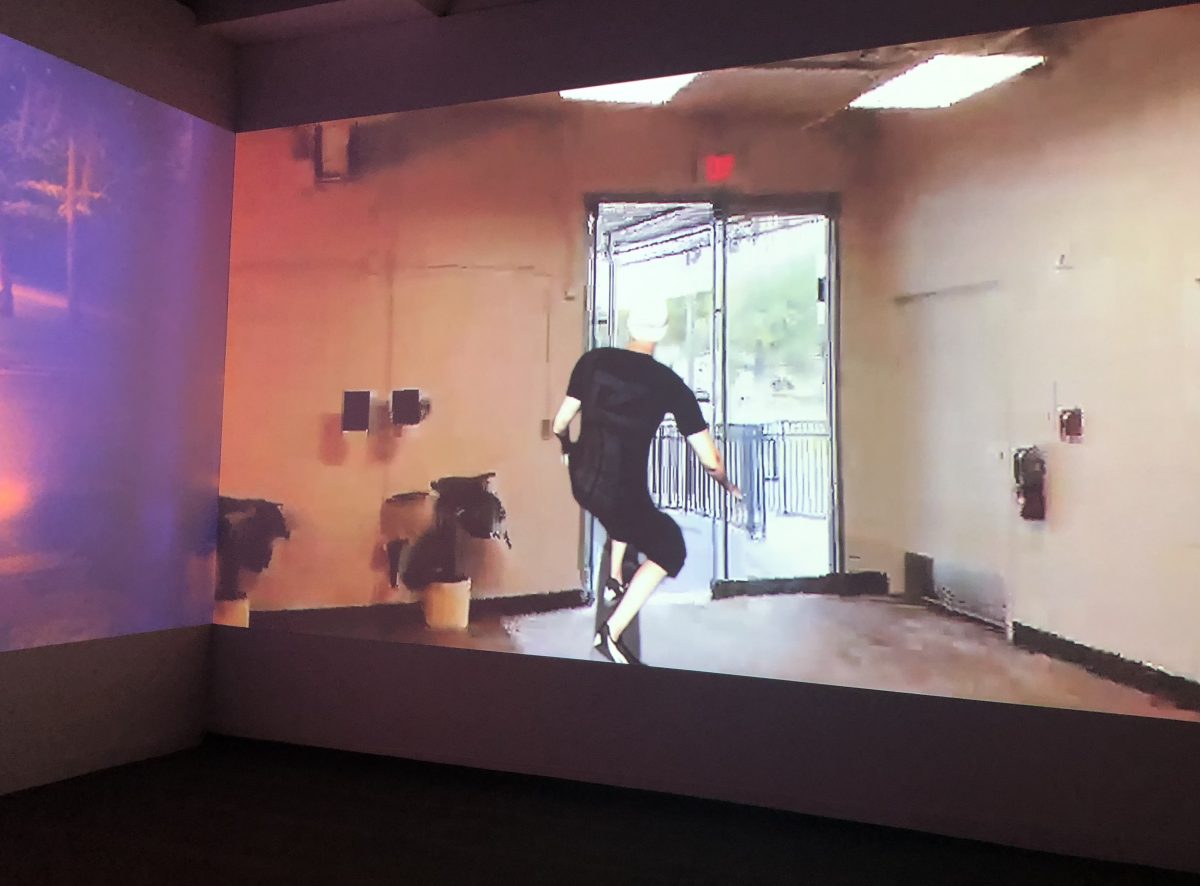 Technical language, used without regard to its actual meaning, has become a mainstay of entertainment. In just one example, the engines of the starship Enterprise were powered by “dilithium crystals.” Those words name two real states of matter that have nothing to do with each other, except as a screenwriter’s convenience. Such abuses, while entertaining, might lead someone visiting the Kimball Art Center, or reading this review, to discount the name of Jibade-Khalil Huffman’s video installation, “Parallax Distance.” That would be unfortunate, though, because parallax, a fundamental principle of binocular vision, is the fundamental way we see distance, and provides a key to appreciating the connection the artist wants to make between basic optics and a fundamental fact of life. Through these engaging and stimulating videos, he wants to show how we grasp our social predicament in much the same way as we comprehend all that materially surround us.

Several times during “You Are Here,” the ongoing project that climaxes the Huffman’s Kimball installation, the camera observes pairs of women. At one point, a woman sitting in her car watches as a second woman drives up, parks, and exits her car. Earlier, or later—there is no chronology—one woman follows another through a park, both followed by the camera, then seen from in front, so both their relative positions and how we see them switch. If I hold my finger up between my eye and something in the distance, I can choose whether to see my finger once, bracketed by two objects, or two fingers surrounding one object. I can’t do both at once, but the one I see two of will waver back and forth between opaque and transparent. All this, my brain choosing between two eyes and two theories of what I’m seeing, goes on all the time, mostly without my being aware. 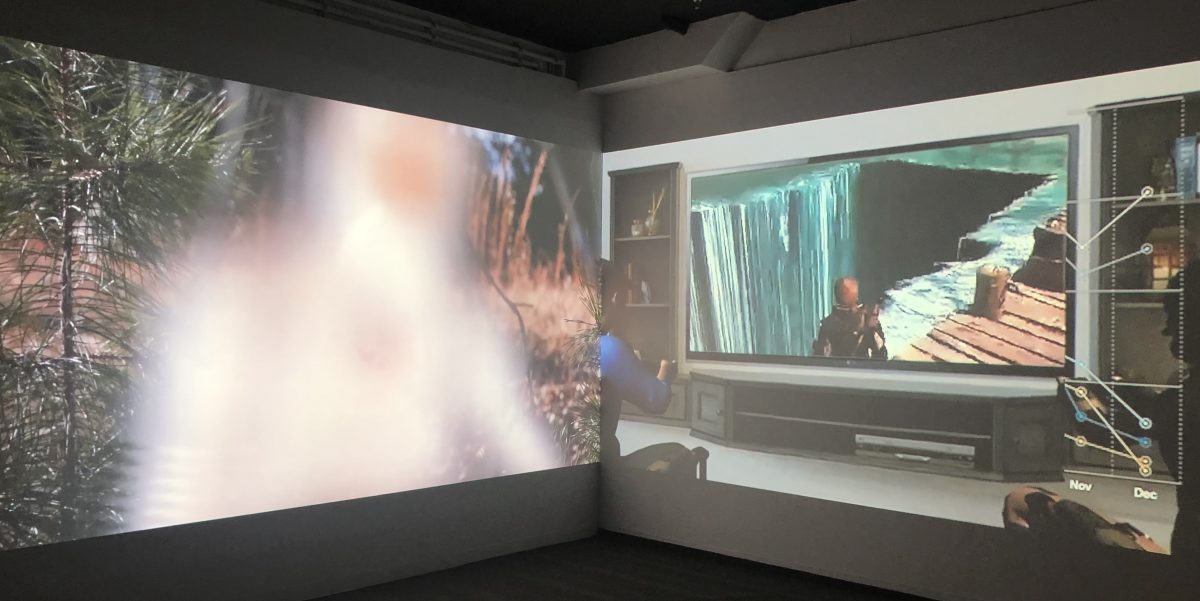 Parallax is most often the difference in perspective between two locations. In a video, of course, we don’t see depth directly, any more than we do in a painting. Rather, our brain infers it from what we’ve learned using parallax and other clues—overlap, relative size, etc—in the real, three-dimensional world. Curiously, artists work hard to flatten a 3-D world, but we effortlessly restore depth to their 2-D renderings. What poet and visual artist Jibade-Khalil Huffman does is employ one or two visual channels, processing software, and editing to show how much what we know depends on how much we see, and just where we view it from. The thrills of skateboarding may be unknown to a viewer, but a sequence wherein the camera rides behind a young man who speeds down hallways, through walls, into offices, factories, and beyond is one of the most viscerally exciting visual experiences ever created.

This use of a physical principle to clarify a sociological point is risky, of course. Scientists hate it when Newton’s First Law of Motion, which is simple, is used to describe the interactions of people, which are mindbogglingly complex. Or when the Uncertainty Principle (again, simple) is used to argue that nothing can be certain—when our lives are full of certainty. Yet analogy is one of the mainstays of human understanding, and ubiquitous in art. Cause-and-effect is just such an analogy, which calls for caution in deciding how to act on what appears to be seen. 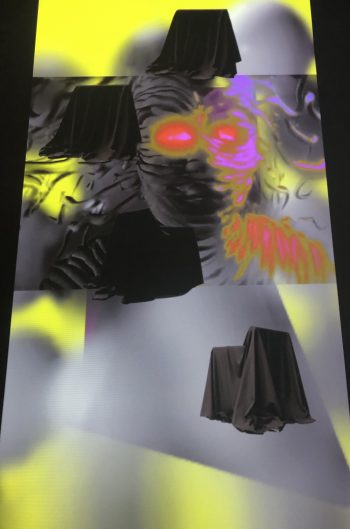 Now it’s possible to describe, if not to explain, the parts of Parallax Distance in a way that will show how the component videos work together. The first thing a gallery visitor will experience, even before the visuals, is a distant, cacophonous level of sound. Except for “Untitled (Space) 1,” each of the videos has a sound track made up largely of found sounds. The ever-present voices of news media comprise a large part, serving to anchor the visuals in everyday events, even as the noises defy efforts to listen to them or sort them out. It’s also worth noting that everything is shown in color, which also helps keep things in the present, rather than the past-tense or timeless feel of black and white.

Most of the videos are projected directly on a wall from above, while a few are displayed on flat screen monitors. The ones on the monitors and most of those on the walls are in landscape mode, while three of those projected on the walls are in a rare, vertical format, which causes the image to form a tall trapezoid, narrow at the top and wider at the bottom. This is yet another example of parallax: from the high point of view of the projector, the light forms a rectangle, but from the point of view of someone on the floor, it’s a quadrilateral with only two parallel sides. These different presentations transcend formal devices to become part of the content. Some visual elements appear in more than one video, while the feeling that results from seeing them arranged in a vertical space—essentially above and below each other—is different from seeing them in a more familiar, side-by-side disposition.

Even though our two eyes seeing different things at once is its more common form, it isn’t the only way parallax works. Astronomers can look at space now, and then again in six months, and the movement of Earth half way around the sun will have shifted what they see as if their two eyes were separated not by inches, but by three hundred million kilometers. That distance is useful given the vastness of space. And given the complexity of human behaviors, Huffman makes similar use of several techniques. One is to use two separate monitors, or two adjacent walls, to present similar or contrasting views, taken at different times or from different places, but presented side-by-side for comparison. Overlapping two or more video streams is another way to break up the image in the mind of a viewer. Much of the incidental material that fills these videos is comprised of beautiful, even hypnotic animations, through which glimpses of thematic materials appear, dance about, and disappear. 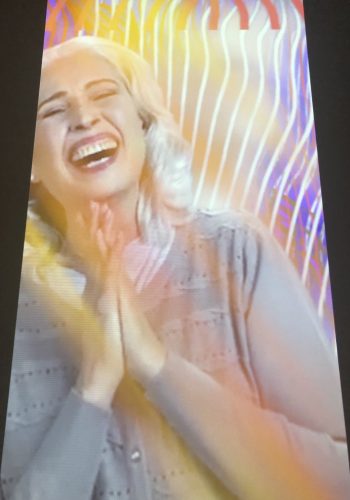 In the early 20th century, Surrealist artists made films in which disembodied light dances, or sometimes marches, across the screen. Their work, vastly improved, informs these videos. For many in the audience, that visual pleasure will be enough. For others, as in some poetry, there is a narrative element in Parallax Distance, which threads its way through those visuals, but does not dominate them. The pleasure there comes in watching multiple events play out, often over or through each other. Trying to follow the story would be a mistake, even as the visuals cannot be watched too closely. As Jibade-Khalil Huffman points out, most stories make us, the audience, into spectators, which is already too often our role in life. Here, he offers us a chance to write the story ourselves, even to experience it as participants. That may be the ultimate parallax: to watch a story we are telling ourselves at the same time, like a dream.