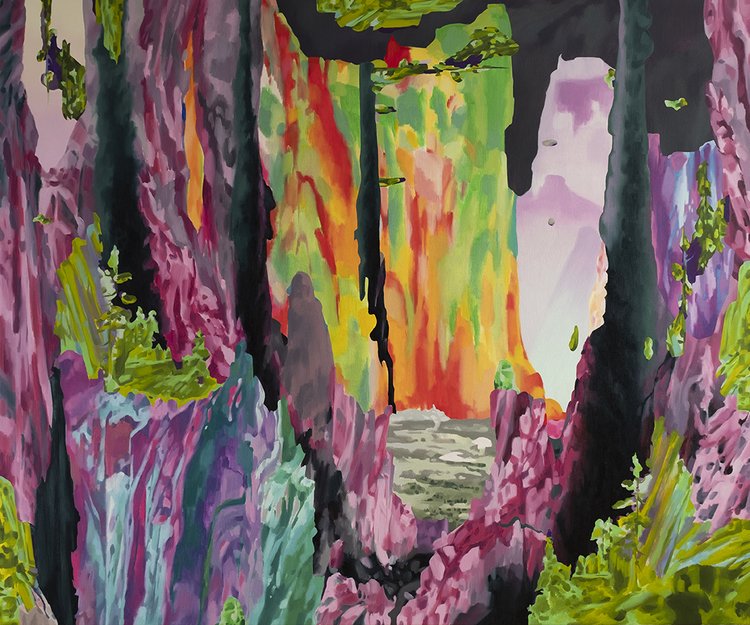 “I could not do this in my head,” Jerrin Wagstaff says as he passes an open palm over “Ultrascape #21,” the latest of his new paintings. This is a man who has spent half his life doing something most people rarely do, which is to create pictures of places that didn’t exist until he invented them, and yet here he is explaining that he couldn’t accurately imagine, let alone preconceive, the art he is making now. Instead, he works from an intention that can only take shape in the act of his doing the work. At this advanced stage of his pursuit of that intention, a viewer might find it difficult to see how this image is connected to the great age of American Landscape that he freely admits inspired him. His towering geologic forms, with their covering of forest vegetation, and low among these the snippet of valley floor that alone among the elements has a horizontal, rather than a dramatically vertical, orientation, bear almost no resemblance to, say, the views of Yosemite Valley done by Albert Bierstadt for his patrons in the American tourist industry, during the westward expansion that immediately followed the Civil War. The contrasts between then and now are things we can all see and agree on; the essential question we must ask, then, is why? What do these revisions of the art of the past signify to the artist who made them, and continues to do so?

Wagstaff earned advanced painting degrees at prestigious schools, first at BYU in his native Utah, then at Long Beach State University, followed by at least a dozen years of teaching. He must have seen numerous examples of the elaborate research, planning, and especially the sketches traditionally required before a painting could properly begin. Yet for three years now he’s been making some large, complex, brilliantly colorful, and powerfully effective paintings that remain undetermined through almost every step of their creation. His method is one of indirection, involving steps that approach his goal tangentially, while he watches the process like a hawk, alert to the appearance of a passage that brings him closer to what, after three progressively more compelling bodies of work in as many years, he knows he can do.

Jerrin Wagstaff understands what he’s doing, which he’s discussed freely with interested parties, including previously with a contributor to this magazine and the staff of Modern West Gallery’s residency program. They in turn have recounted his procedure accurately, but also ascribed motives to him that may go beyond anything he has written or said—although he accepts the principle that the audience of a work may ascribe what they find in the art to what the artist has done, so long as they can show it to be present therein. For instance, among the concerns that Contemporary artists, critics, and the pubic share today are the catastrophic degradation of the natural environment under the impact of climate change, along with life in an increasingly post-apocalyptic world. These concerns, along with racism, sexism, capitalism, and a seemingly endless list of other “isms,” are topics every bit as compelling for artists as for anyone. Yet compelling as they may be, these are not the only or even the most important reasons for making art. 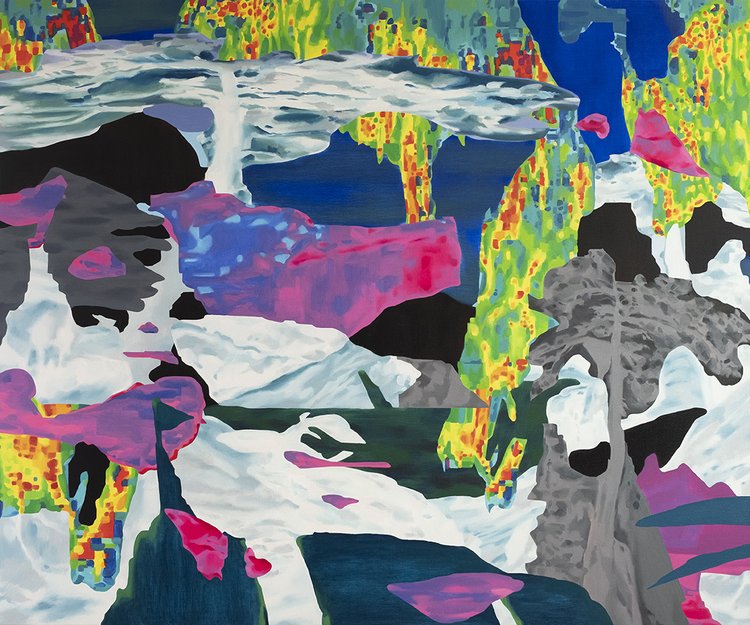 To be sure, Wagstaff has anchored his recent works in his response to several major painters who were on the American scene during the period of westward expansion that has come to be known as the Era of Manifest Destiny. It’s these paintings and these artists, men (of course) like Thomas Cole, Albert Bierstadt, and Fredrick Edward Church, who largely came to be known as the Hudson River School, whose characteristically overblown, late-Romantic, and nationalistic style of landscape painting Wagstaff has put to good use in his own work. And while it’s possible to read his significantly revised versions of their various visions as a criticism of the values they shared with their audience, their patrons, and their historical moment, that is not necessarily his purpose. After all, as artists and painters they represent not just the first widely recognized American school, but a parallel to their contemporaries in Europe: painters who represent the climax of an era that began in the Renaissance and was just about to be replaced by the onrush of Modernism and the random catalog of styles and subjects it brought along in its wake. They and their work matter in art history.

The question of whether the content of any specific work of art is more important than the ongoing evolution of art’s power to communicate with and perhaps influence an audience remains one that, like the matter of whether or not to have a child, must be made by the individual conscience. What we can say about it here is that, so far as content is concerned, a work of visual art should not require lengthy explanation outside itself. On the other hand, a whole lot of really good art is being made in our time, much of which is down to a remarkable set of tools artists (and others) have acquired recently. Cubism, invented at the beginning of the 20th century, allows artists to represent not just static objects, but subjects through time. The same artists who invented cubism — mainly Picasso and Braque — also introduced collage as an even more expressive technique, one that multiplies the fabric of art the way cubism did its point of view. Two-dimensional collage led to collage in the round, or assemblage. And today, collage and assemblage are giving art a cerebral, fourth dimension — an even more powerful parallel to cubism — through sophisticated layering, a process emphasized by computer applications like Photoshop. 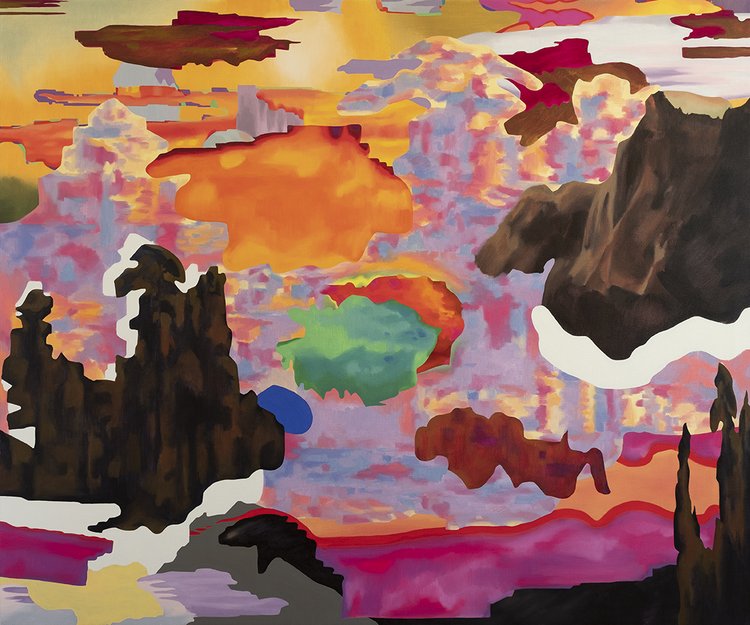 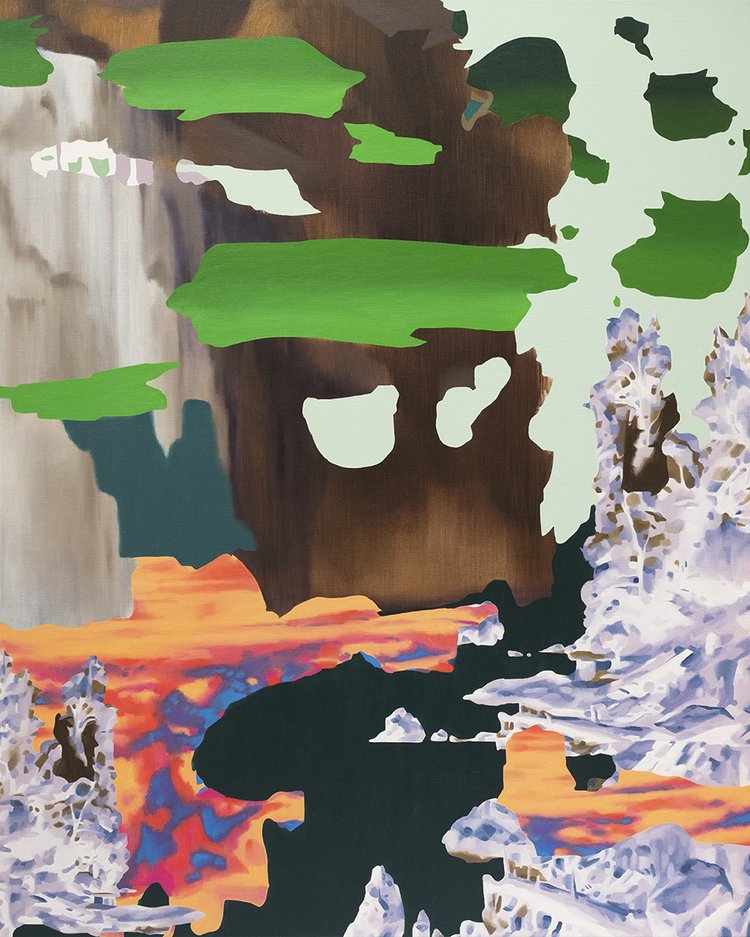 Compare, for example, “Ultrascapes #17” and “#14,” which face each other across the small gallery at Nox, each of which displays particular tropes seen elsewhere as well. “#17” capitalizes on an exploratory collage process, done in Photoshop, wherein the computer is used to sample an extensive selection of the overwhelming crush of images now available to us all, including the American landscapes mentioned above. These collages essentially become the sketches from which the artist paints, a process of further experiment and exploration. In “#17,” though, Wagstaff has deliberately mis-matched the fragments, leaving white shadow-like areas that call attention to their individual histories and their assembled character. Meanwhile, in “#14,” Wagstaff has similarly foregrounded the fact that multiple levels of imagery have been superimposed, rather like so many posters that were applied over each other on a wall and which have become weathered and damaged so the older parts show through in places, or like the torn pages of a book that now bring together words meant for different stories. The implications, how these are read, is up to the viewer, but probably ought to include the eerie sense of how different times occur in the same spaces, or how every mind holds conflicting and fragmented ideas at the same time. Our everyday sense of reality is formed much as are these paintings, with our experiences being recreated in our minds from stored fragments like these each time we recall them.

As for the colors in these paintings, over time they’ve come to have less and less in common with nature or their original, scanned images. Asked if what might be a green body of water and a yellow river in the foreground of “#15” was intended as a vision of the effects of acid rain, Wagstaff thought for a moment before replying, “I don’t think it’s apocalyptic.” On the other hand, the cloud-like form that rises behind it may suggest smoke to a viewer primed by environmental concerns. Another suggestion, made in anticipation of a previous exhibition at Nox, relates them to the more elemental and less stable visuals generated by computers and video games. Perhaps the point of agreement is that the brilliant colors and vivid, suggestive forms support the separate reality the paintings require: art that pleases the eye, challenges the mind, and suggests more than can possibly be reduced to simple, formulaic explanations.

Throughout these six paintings, and the many that were shown in previous shows, one rule remains paramount: each new canvas is increasingly determined by the previous paintings. In other words, the effect is cumulative and Jerrin Wagstaff’s art arises as a unitary experience. Were this process to be interrupted at this point, it probably could not be resumed. And so Wagstaff, who knows this better than anyone, having spoken of the stress of painting full-time for so long, has also spoken of his intention to keep working, though perhaps slowing down a bit. Considering how much he’s given us to absorb, that too could be a good thing. 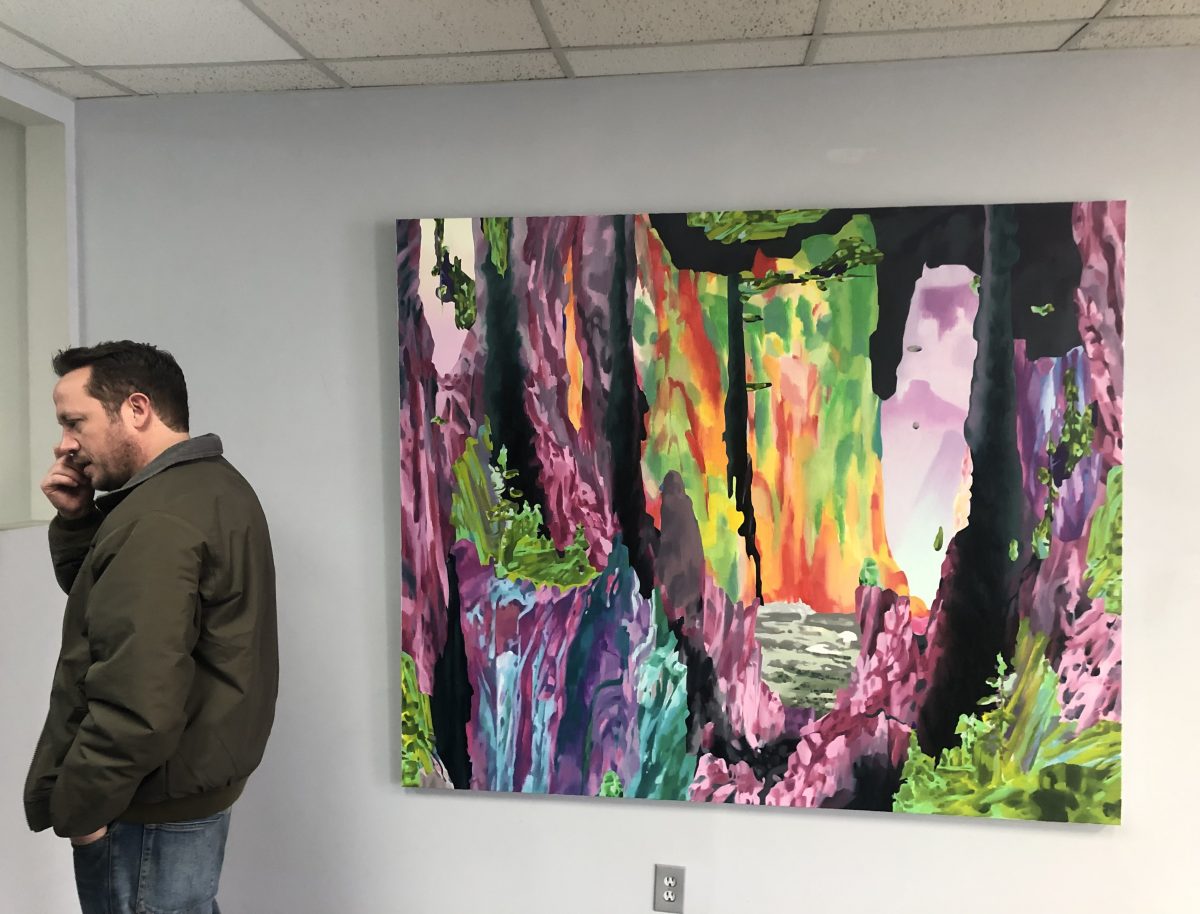