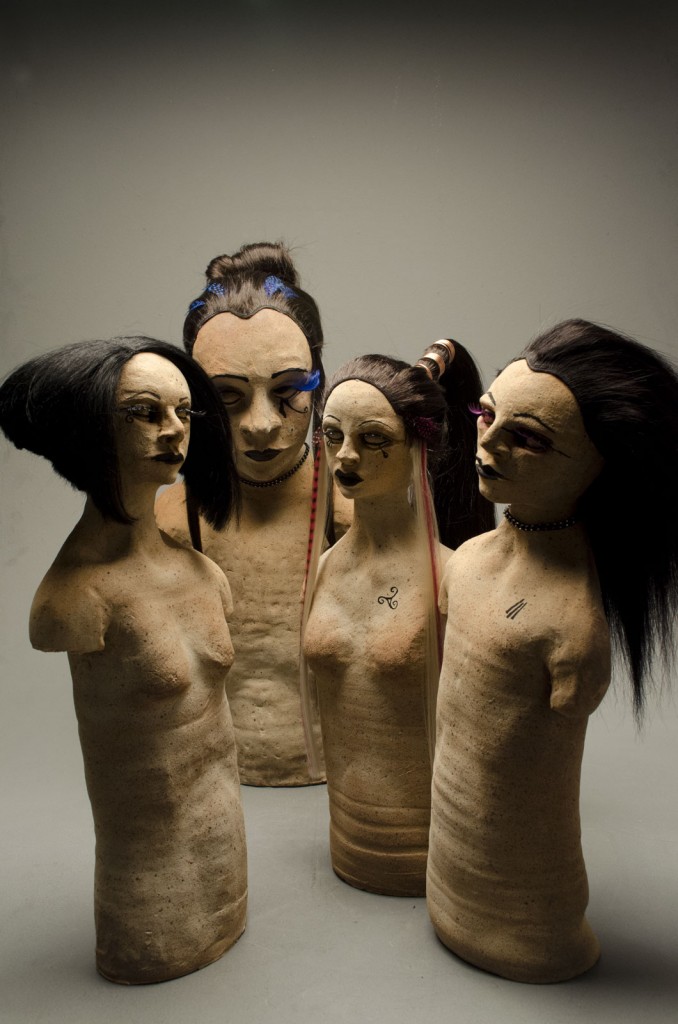 How we present ourselves, in public and in private, has a huge bearing on how we define ourselves as human beings.  In our modern society presentation involves the clothes we wear, the make-up we use and the way we style our hair; but it also extends to external accessories like the car we drive, the music we listen to, the art we hang on our walls and the people we associate with.

An upcoming exhibition of works by Brigham Young University MFA candidate Jerel Harwood questions how much of this self-presentation and external manifestation represents who one truly is as an individual, unique human being, and how much of it is a result of numberless demographic and ethnographic conditions, primarily sub-culture identity.

A major ethnographic reality of any society is the formation of cultural groupings within that culture.  In western culture, where the individual has greater freedom to “identify” herself, we see the formation of inter-cultural groups and sub-cultures that not only define themselves individually, they define themselves collectively, and frequently in opposition to the prevailing “mainstream.” In our own society, these  sub-cultures have taken many forms, from the beats to the hippies to the punks and beyond.

Of course the “mainstream” will differ from society to society, but the reality is that there is a mainstream, especially at BYU, where there is a requisite honor code (including dress and grooming standards) that Harwood is not exempt from. The “Goth” sub-culture is one of these inter-cultural groups that is considered by Harwood as an “outsider” group and as such, signifies a phenomenological critique of mainstream culture that he has experienced for himself on campus.  These outsider expressions can be viewed with extremism in inter-cultures and are a bold critique of the mainstream society they are an outsider to.  Harwood says he has no problems with the BYU honor code, it was something he was aware of going into the experience: “I think in actuality my experience is that I’ve been a harder critic on my work, hyper-aware of some of the boundaries” because of the honor code. And he’s been surprised at how well his work has been received. “The overall response was very accepting, excitement, even. So it could be said that the outsider/insider divide might be less definitive for the outsider than they might think it is.”

Harwood has made a study of Goth sub-culture in America today and his work presents an existential interrogation through the creation of Gothically-stylized figurative sculpture that evoke the primary qualifiers of the movement: destruction, loss, and mourning. “These tie back to the original goth movement,”says Harwood. “In the music, the lyrics are tied to these aspects and the people who listened to this music emulated those people who expressed themselves in a certain manner of dress and mood; the music came first and style came second.  It was not till 1983 till the first reference to the fans being Goth was made.”

Harwood’s sculptures are roughly-defined torsos made in stoneware, their arms missing, ala “Venus de Milo,” but the aesthetic here is far from a classically Greek concept of beauty. The hair is styled to reflect an early pre-modern era manner detached from contemporary culture; the faces are painted with linear embellishment and the eyes darkened with make-up and decorative color. The titles refer to a pre-Christian era: “Cernunnos” takes its title from the “horned god” of Celtic polytheism while “Vervain” refers to a plant used by early Europeans for supernatural and mystical purposes.

The primary question these works pose is, are these personal forms of presentation a form of intrinsic expression, something innate to the identity of the individual, or a façade that is personally manufactured and part of belonging to a larger culture, whether it be a mainstream or subculture?

Harwood says, “I don’t think it is unique to the Goth subculture, I think it is represented in every culture. Isn’t that essentially how we define subculture is through these external identifiers.  In reality, not everyone who wears black and listens to Bauhaus is a Goth.  From the outside looking in people use these cultural definitions to label the ‘other.’ This does not mean that we must use the label society gives us; identity can be fractured in our own image of our self and what we feel we have an affinity towards and conversely how society wants to label ourselves for these interests.”

No better subject than Goth sub-culture could be applied to the centrifugal quality of identity for such an existential inquiry, due to the degree of physical and ideological extremism, the commonalities between each individual who professes to be “Goth,” and the measure of the outsider factor that defines this counter-culture. Says Harwood, “Our lives are a constant shift into the role of outsider and insiders as we encounter diverse cultural situations.  I want people to recognize that being the outsider is not negative but a role we all share as being part of the human condition.”