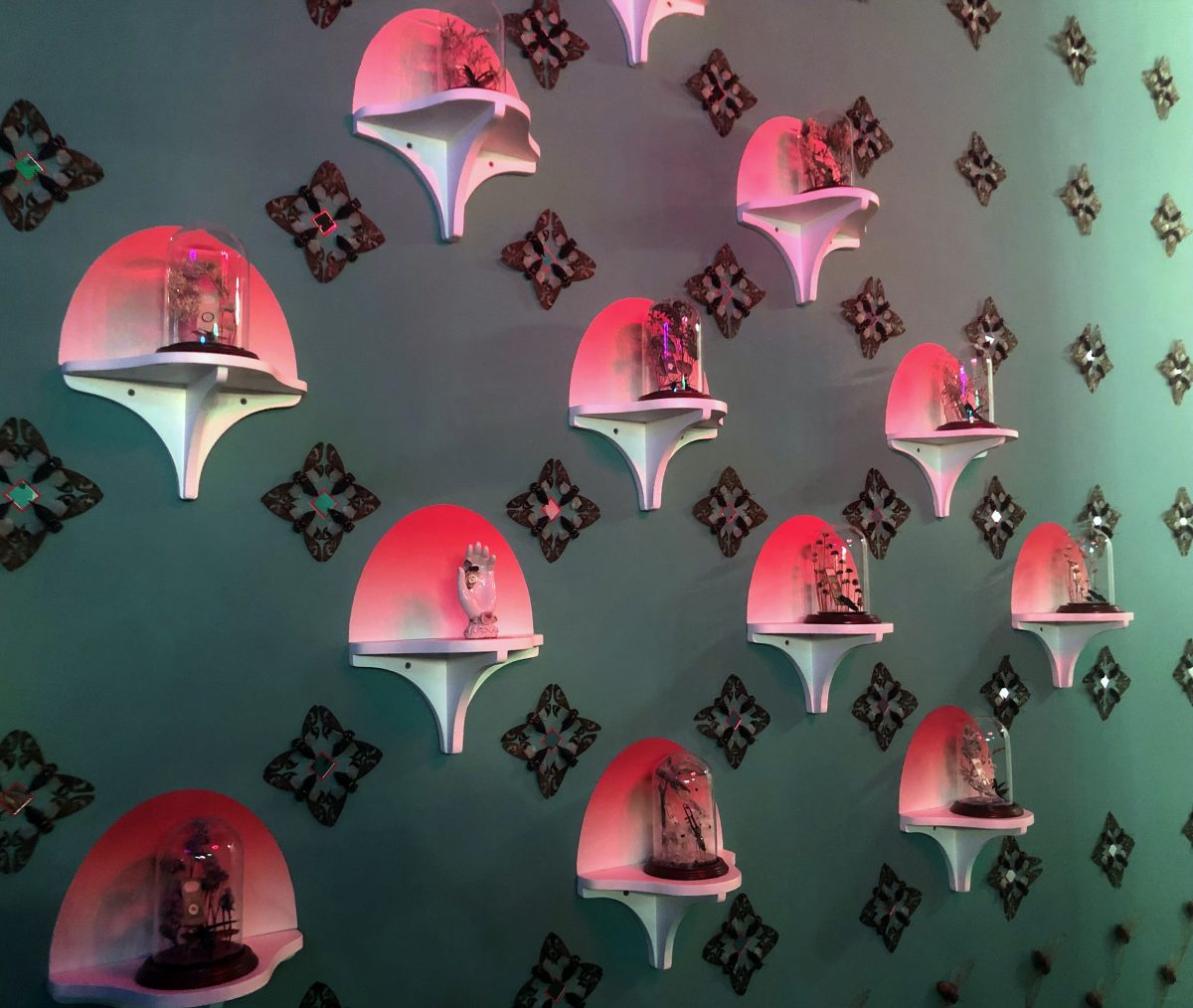 Installation view of “Eat Me, Drink Me” at Kimball Art Center (photo by Geoff Wichert)

When Alice took a bite from a cake labeled “Eat Me,” or drank from the bottle tagged “Drink Me,” terrifying changes overcame her: she grew to the size of a house, then shrank to that of a mouse. It’s not hard to see those permutations, which artist Jennifer Angus makes the theme of a large and elaborate installation, as metaphors for our current condition: we humans have collectively become the largest living organism on Earth, and yet we wither in the face of climate changes that include fires, fatal heatwaves, floods, storms, earthquakes … if life is a test, we’ve hit on answer — e) All of the above — in the list of potential disasters we now face.

In her statement, meanwhile, Angus speaks further “of increasingly urgent questions about our perceptions and what we value and protect. Are we big or are we small? Do individuals make a difference? What are the stories we need to tell, and those we need to change?” Scale, then, is a vital part of perspective, a critical part of our point of view, and she intends to help her audience grasp the problem: the orders of magnitude we too often confront unthinkingly. She also acknowledges that we live by stories, some of which no longer serve us well, or at all, and may well all require revision and rewriting: work for, among others, artists. 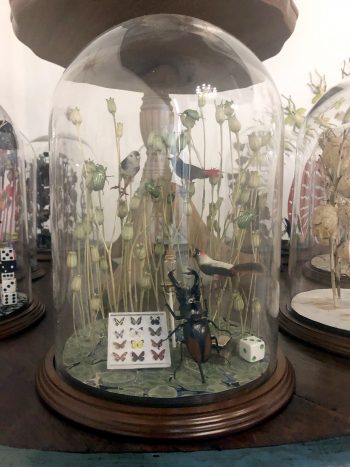 In Jennifer Angus’ installation, lepidoptery is for the birds (photo by Geoff Wichert)

On entering Eat Me, Drink Me, which occupies two rooms of the Kimball Art Center in Park City, the change in perspective is of an order of magnitude similar to what Alice underwent in Wonderland. Instead of a neutral coat of gallery paint, the walls here are covered by ornamental patterns made entirely of insects — thousands of bugs — of many colors and sizes, all arranged in neat geometric patterns: lines, diamonds, circles. They share the walls with a second layer of paradoxically humorous scenes featuring insects standing up like people, posing inside specimen jars in which they hold forth before scaled-down science labs or lecture halls, among displays of tiny birds, butterflies, and scientific specimens kept in bell jars. These tiny jars are, in turn, replicas of the larger bell jars in which the six-legged scientists themselves are seen. In this way, the various scales she uses are stitched together. Some artists work hard to produce work that cannot be photographed, but Angus may have stumped them all; has anyone ever captured claustrophobia on film? In person, no visitor comes away entirely untouched. Some turn back half way through. Some may comfort and protect themselves behind the naive assertion that it’s a romantic celebration of nature. But the natural world it refers to is too far out of balance to go on much longer. 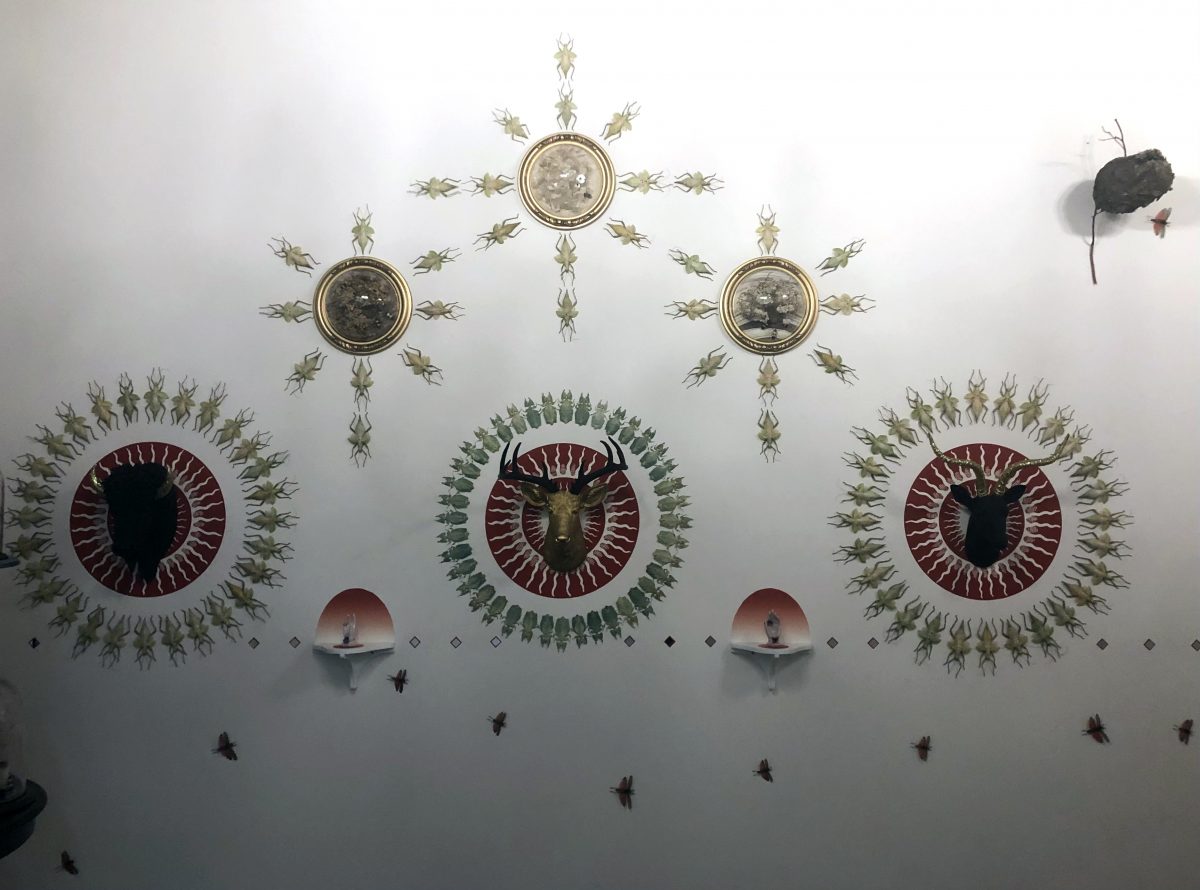 Trophy wall at “Eat Me, Drink Me” (photo by Geoff Wichert)

Beginning on those same walls and extending into the center of the main room, a third, equally fictional realm coexists with the formality of the “wallpaper” and the satire of the specimen jars. On the walls are trophy heads of familiar animals, like bison and elk. These are painted in solid colors and seem not to be real, unlike the paper wasp nests, big as basketballs and clearly very real, that hang among them. They, along with a random assortment of chandeliers, surround and become the environment for a climactic tableau: an elaborate dinner, or in keeping with the evocation of Alice in Wonderland, a tea party, attended by regionally familiar, stuffed and mounted mammals. Every audience member will have seen, and probably enjoyed, illustrated or animated and invariably charming versions of this scene: animals playing the roles of humans indulging themselves in pleasures no actual animal could partake of. For those who can manage a close look, the carpets on the floor, the plates of food, and a thousand quotidian details serve to break down this conceit, once thought to be harmless, but revealed here to be a simplification and a travesty. The animals are never us, but we are always them, and what we do to them we do as well to ourselves. This scene brings home and nails down the emotional content of the entire installation. 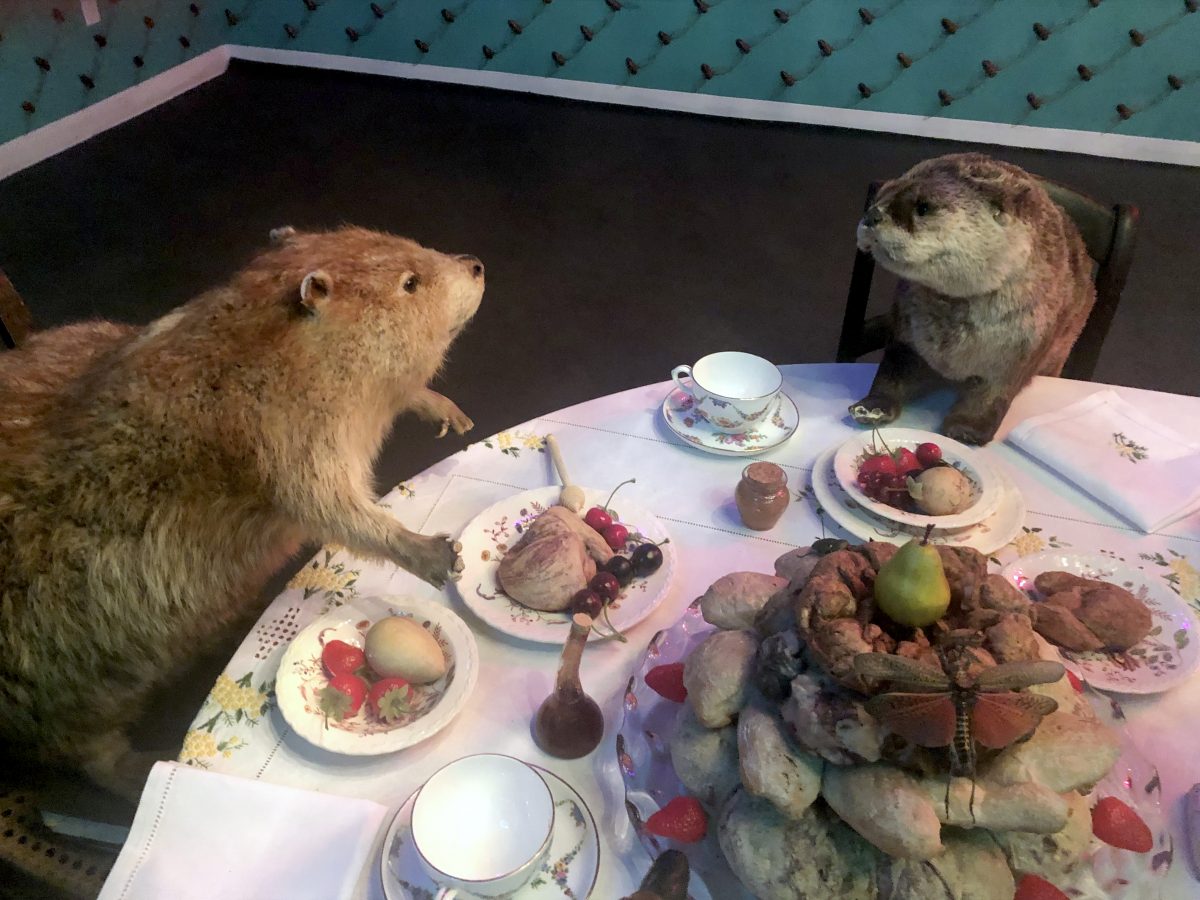 We’re told that thousands of trees are cut down every day just to make toilet paper. We know that all such trees that are taken are homes to birds, climbing and burrowing animals, and insects, millions of which are killed, or at least left homeless, in a ruined environment, when those trees are harvested. But what does that really mean? This installation is a graphic vision and reminder of how much natural life is destroyed every time humans decide to build, decorate, or remodel a home, let alone build a road through a forest or an island on a lake. What if instead of despoiling a natural habitat, we required ourselves to share it?

Although the number of living creatures is large, it is finite, and shrinking. Species do become extinct when none are left, or effectively so when their numbers fall below a sustainable population. Likewise, there are a limited number of acres of land to be build on. Part of the subject here must be the insect holocaust that continues, neglected and ignored, while humans conscientious enough to worry about the whales and polar bears are distracted. 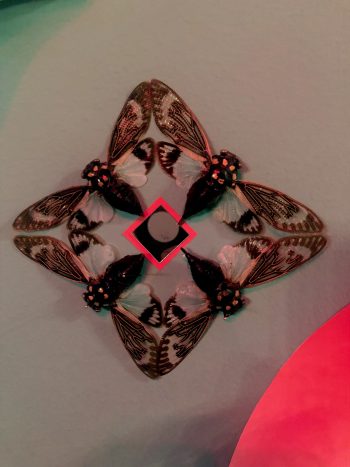 Detail of “wallpaper” from installation view at the top

In Eat Me, Drink Me, Jennifer Angus has crafted three meticulous and fully interlocking fantasies, each a work of reverie and imagination, yet shot through with factual reality. They are one version of the new stories she wants us to tell ourselves. Biology, for all its mess and apparent chaos, derives from the four-part mathematical structure of the DNA molecule, repeated and varied like the geometric patterns on her walls. Insects may not actually practice science the way they do in her jars, but the subjects of research and those who study them grew up together in the same immense, but still finite vessel — not a bell jar but the spaceship Earth. And the sophisticated social rules that govern a tea party, written a bit larger, rule the conversations by which we will decide the future of ourselves and our children.