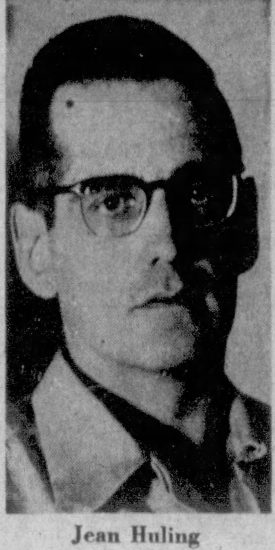 From Williamsport, PA (born Dec. 12, 1919), Jean “Hy” Huling studied at the Pennsylvania Academy of Fine Arts, was in the WPA federal arts program in the 1930s.

He served in World War II, after the war married Elda Robertson (Jan. 6, 1944) in Laramie, Wyoming.

He studied at the Art Barn in Salt Lake City for three years. In 1949 he won first prize in the amateur division at the Utah State Fair.

His “City Impressions” is in the State of Utah Alice Merrill Horne Art Collection.

1951, Feb., exhibited at Cinema Arts Theatre
“I believe my painting would be classed as influenced by Cezanne and profited by abstract principles discovered since Cezanne … I feel art is a creative expression and as such can be expressed either abstractly or realistically … Any expression must be emotional to a degree, and subject matter must awaken an appeal to the senses, not just to the eye.”
Deseret News, Feb. 11, 1951

By 1957 the family had moved to Arizona.