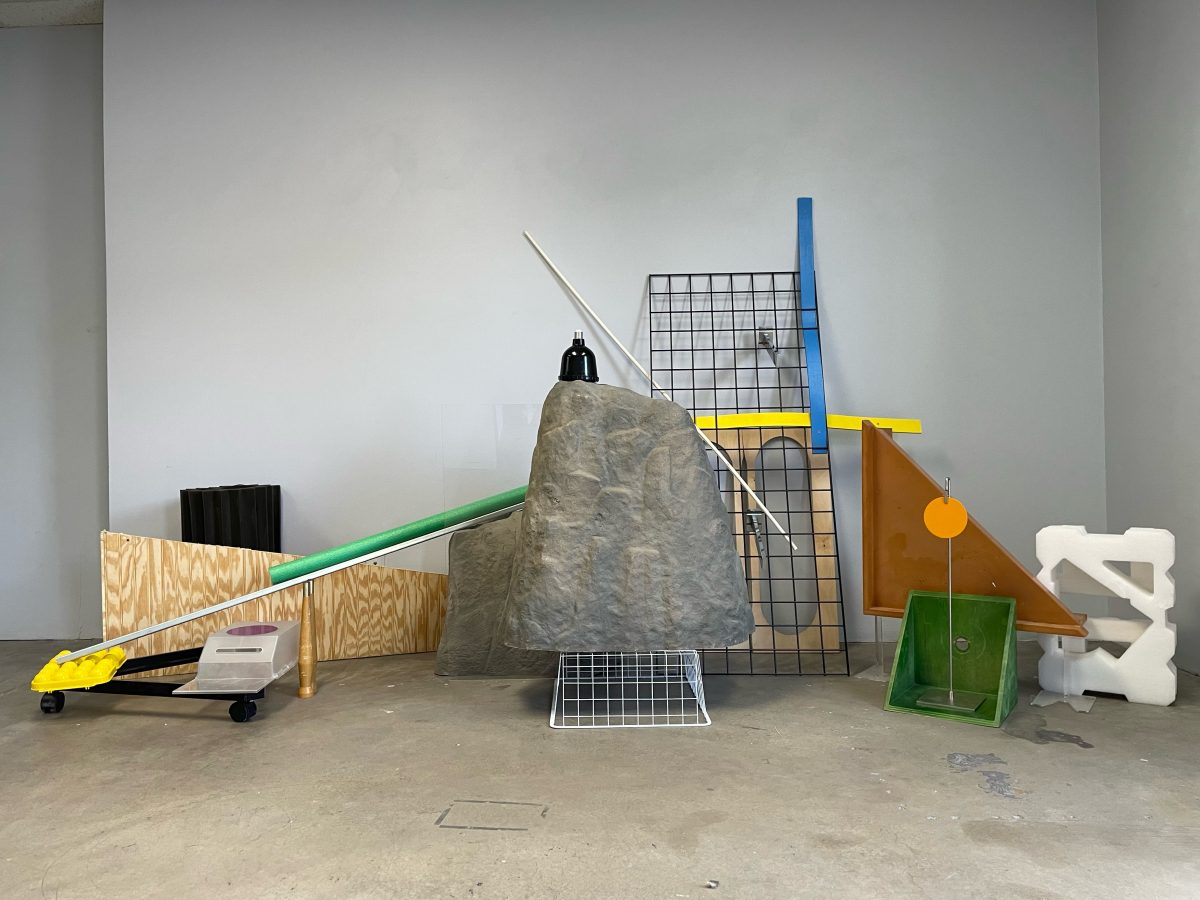 Anyone who follows the excellent and very full presentation schedule at UMOCA has seen the aesthetic virtuosity of Jared Steffensen in action. Ironically, though, Curator of Exhibitions was not his first choice for a day job. Steffensen identifies strongly, perhaps first of all, with skateboards and boarding, almost more than with sculpture and his art world identity as Sculptor. Fortunately, skateboards are clearly mobile and demotic works of art, as can be seen on any open space with stairs, railings, or other challenging features, or for that matter as they are carried, fully customized by their creators, as they walk through spaces closed to wheels. Recently faced with one of the oldest questions in art — the relationship of the third dimension to the standard two — Steffensen found his way to a solution of sorts through his passion for action: an approach the results of which are on display in Idem Norms, Dorms Mine, an exhibition currently at Nox Contemporary, where it’s open by appointment.

A brief bit of history can help here. We know that the Mesopotamians saw sculpture as a multi-sided painting. Think about those 5-legged bulls with the king’s head, on which the cubical shape of the raw stone is still in control. Why five legs? Because the front had two and the side showed four, as if the two perspectives had been pasted on the block and no one could take an oblique view, which is pretty much what happened mentally. Egyptian figures started out as bas-reliefs and were never conceived as fully round. It was the Greeks who liberated their figures from the block, and they didn’t simply trust their audience to see what they’d done. They carved gods and heroes with one hand behind their backs, so viewers had to walk around the statues to find out what they were holding. 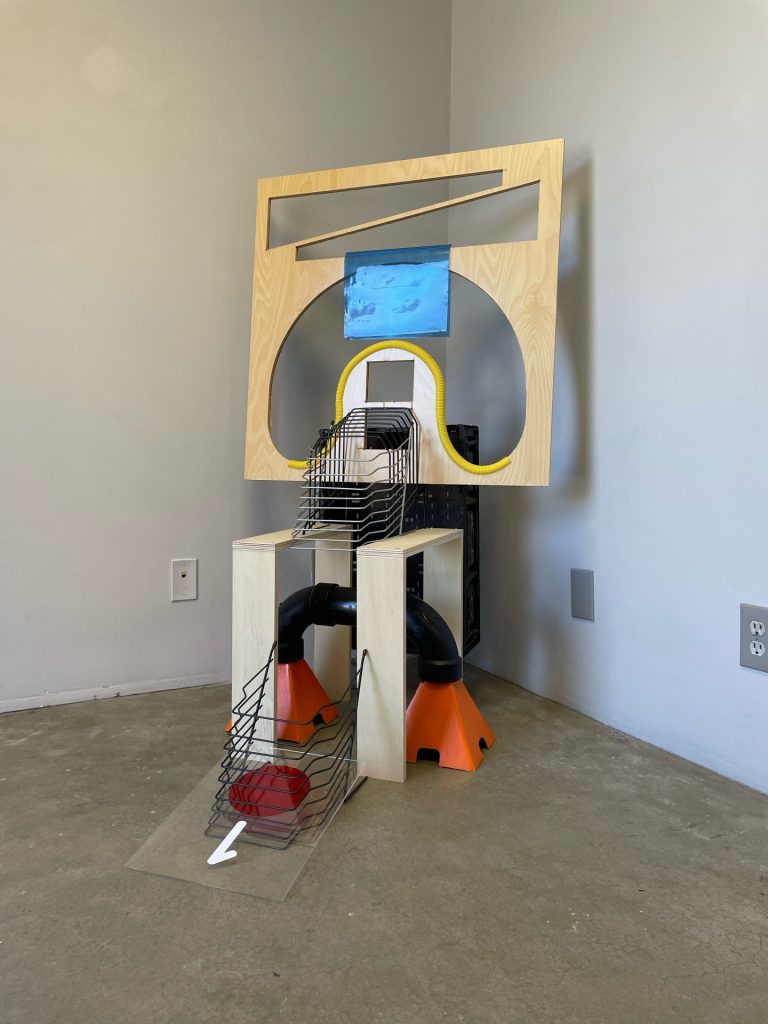 So here’s the crux: a painter has complete control of the viewer’s point of view; no use in trying to see what these characters are holding behind their backs. But with a subject in the round, viewers can walk around and see it from whatever vantage point they like. This is basic stuff, admittedly, but “basic” doesn’t mean trivial. In a sense, painters have it easy and sculptors take on an almost overwhelming challenge, which may partially explain why for every successful sculpture there are so many more paintings, prints, and other 2-D works. As recently as the career of American master sculptor David Smith, artists were trying to bridge the gulf between 2-D and 3-D. Smith failed, as did everyone else, because it can’t be done. No object can belong in both conceptual realms at the same time. But Steffensen found a way around the dilemma, a truth that he was led to by the view from a hurtling skateboard.

What Steffensen apparently saw while moving rapidly through the world, past static scenes that quickly succeeded one other while he continually sized them up as opportunities and challenges, was that an object may not be able to exist simultaneously in 2- and 3-dimensions, but the idea of it surely can. As a sculptor, he works with found objects for both their innate, visual qualities and their learned associations. As a collage artist, he works with . . . found images for their innate, visual qualities and their learned associations. What he recently turned to, then, was the idea that a collage is just a static sculpture; one he could essentially “animate” by reproducing it in 3-D. He’s done this — there are several examples currently on display at Nox — but he’s also drawn at least one major lesson from the experience that is likely to find wider use. 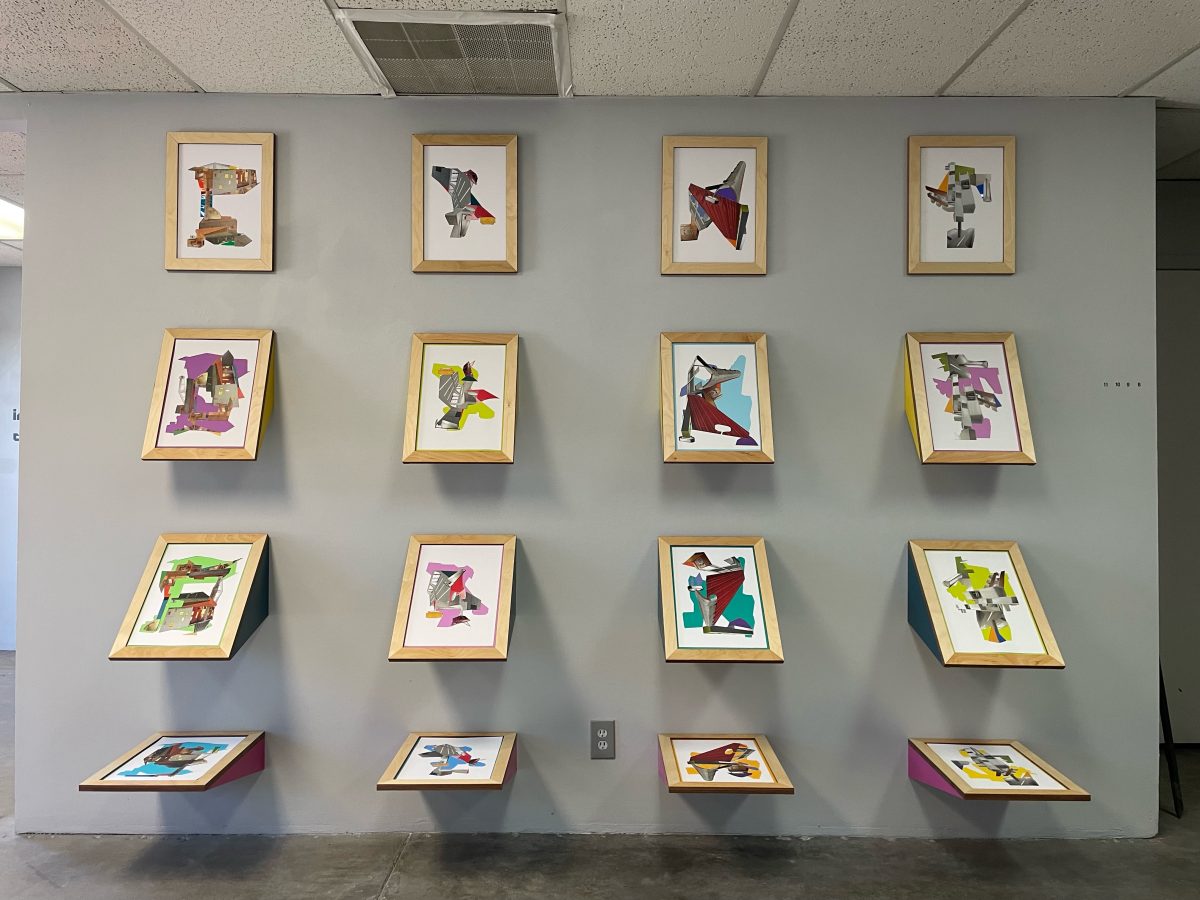 The centerpiece of Idem Norms, Dorms Mine is a suite of 16 intricately interrelated collages. A characteristic common in collage is the use of materials drawn from a variety of sources. The fake Basquiats recently seized by the FBI came under suspicion when it was noticed that some of their raw materials were printed years after the artist’s premature death, which took this principle of contrasting sources a bit too far. But Steffensen, whose preferred source materials include architectural and interior design magazines, secured adequate copies of these to allow him to repeat his various tropes and featured characteristics from one collage to the next, building a series of three successive and remarkably satisfying variations on each of four originals. He also used the same materials in different arrangements across the four sets, which are shown in vertical formats, so that what develops in each set of four is echoed by the set beside it. 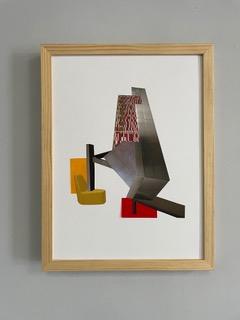 It’s an astonishingly tight and solid array of all sixteen variations, but when the artist hung it on the wall, he found it wasn’t enough. It lacked the shifting perspective that is so essential a part of the reward of sculpture. He’d used vivid colors among the overlapping layers that comprise each of the collages, and mixed up those colors in their framing, but neither the presence of shifting layers nor the alternating colors were dynamic enough to provide the kind of visual action seen, say, from a moving skateboard. What he came up with was to angle each of the ranks of four out from the wall, beginning flat on the wall at the top and shifting towards the horizontal as they approach the floor. In essence, as viewers scroll down the display, it seems to come towards them. It’s truly a remarkable effect, and not merely a visual one, but it also suggests that there are other ways it might be exploited, depending on the artist and the art work.

Viewing the juxtaposed, sculpturally conceived 2-D collages and their 3-D relations, it becomes apparent that Jared Steffensen has put lot of thought and no little practice into how they work with our perceptual and conceptual systems. But the test of any technical experiment must always be whether the art succeeds. Jackson Pollock’s drips wouldn’t have made a difference if the networks they let him produce hadn’t been worth looking at. The good news from Nox is that the collages at the heart of Steffensen’s achievement are optically brilliant works that come as close as possible to that ancient desire to make art that is both 2-D and 3-D at once, and would please the eye and mind all by themselves, even if they had no other claim to our attention.