Jared Clark On The Spot 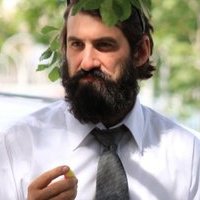 Jared Clark was born in Provo, Utah on June 1st 1976 but was quickly moved to southern Mexico where his father dug as an archaeologist. He was next relocated to Ann Arbor, Michigan through grade school and came full circle back to Orem, Utah for Jr. High and High School. Jared served his church as a missionary in southern Spain and came back to graduate from BYU with a BFA and then went back east to Virginia Commonwealth University for his MFA. Before moving to New York Jared participated in artist residencies at Art Omi in upstate New York, the Vermont Studio Center, and Kompact Living Space in Berlin. He again returned to Utah after his time in New York and currently calls Salt Lake home. He is the recipient of one of the Utah Arts Council’s 2011 Visual Art Fellowships.

What have you been reading lately?

Right now at my bedside there is evidence that I have been reading The Brothers Karamazov, Zen and the Art of Motorcycle Maintenance, Roald Dahl: Tales of the Unexpected, and a biography, Benjamin Franklin: An American Life.

Over my mantel sits a heavy diptych I made years ago by cutting and mounting an old rusting steel billboard onto old plywood panels. Originally it was 10 X 12 feet and made of 18 panels and painted with white out and beeswax – so these two are the last in my possession. I sold the rest off cheap when i moved out to grad school in 2005 to afford gas for the Uhaul. There is also a strange sculpture by Brian Christensen (BYU Sculpture Professor), a non-life-size elephant made of marble, an equally small elephant made of painted plywood, and things related to the two cellos in the house like sheet music, rosin, and bows.

I got to catch Christian Marclay’s “The Clock” at the LACMA this summer. I was excited to get the chance after hearing about it from friends in New York when it was first shown and then the buzz about it at the Venice Bienale. It’s a 24 hour video piece that collages film segments of clocks, watches, and time references and it is all synced with real time. It’s completely mesmerizing and difficult to tear yourself away. I hope to someday watch the other 23.4 hours I missed.

If you could choose one artist (living or dead) to paint or sculpt your portrait who would it be?

My first thought was DeKooning but that’s because I was just reading about his MOMA retrospective and want to go there. If I think about it the answer is….Chagall. I would love to meet him and sit for him while he gave me grandfatherly advice about life and love in his happy Russian accent. I’d like to see what distortions he would make and if he added any floating items to the painting. Speaking of distortions Answer #2 is Alice Neel. Answer #3 is the great Bruce Smith (x-BYU Professor).

Is there a piece of artwork in your home growing up that you remember?

My parents weren’t much for hanging art but my father, being an archaeologist, had this large rubbing on canvas of a carved stone artifact from Mexico that was framed and hung in our home since my earliest memories. It proved to me the mythos of my father-as-Indiana-Jones. It’s still up and I still believe in my father’s exciting secret life as Indiana.