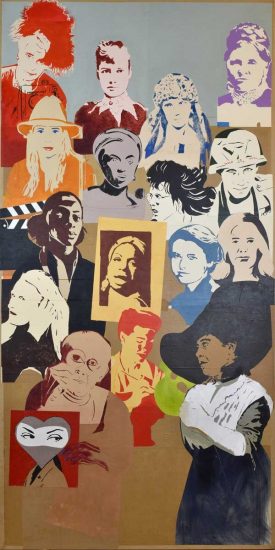 The Work in Progress Mural is an on-going national and international project that has traveled to over twenty-four venues in four years. The mural celebrates the contributions of women from our past and present who are catalysts for change. Ninety percent of the mural portraits have been made by non-artists from communities in Utah, other states, and abroad. The portraits were collaged onto panels by the artist Liberty Blake.

Haworth was a lead artist for nine public works projects in Salt Lake City, most recently the 6000 square foot mural celebrating the ratification of women’s voting rights, “Utah Women 2020” for Zions Bank on the Dinwoody building. She lives and works in Salt Lake City and Sundance, Utah. workinprogressmural.org

Liberty Blake was born in 1968 in London, England. As the daughter of two artists, Liberty was immersed in art from an early age. She attended the small arts-centric Looking Glass School in the west of England which encouraged self-expression and creativity. These were formative years, the beginning of her love for adventure, the natural world, and art-making. Liberty attended Sydney Place for art foundation and studied illustration at Bath Academy of Art. In 1997 she moved to Utah, “for an adventure,” where she co-ran the Sundance Art Shack, teaching paper-making, creating posters, and illustration for the Sundance Resort and exhibited her work. In 2007 she participated in the “337 Project” in Salt Lake City, Utah, where she created the first of many large-scale wall collages, the most recent of which is the “Work in Progress Mural Project”, which recently exhibited at Pallant House, UK. Liberty currently lives and works in Salt Lake City, Utah, making collages inspired by the wild natural places and neglected urban environments that she discovers while adventuring on bikes. Her work is housed in public and private collections throughout the United States and the UK. libertyblakecollage.com