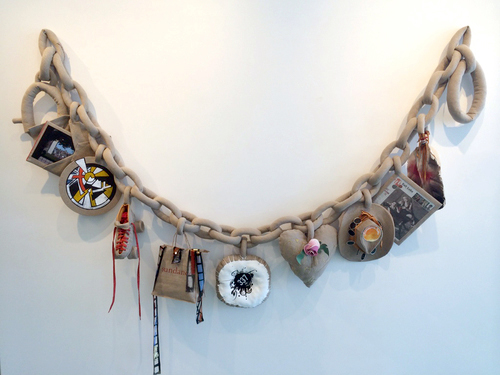 Any random person asked to name the most successful artwork of all time might be expected to answer the “MonaLisa.” She’s instantly recognized by a huge population that sees her often on advertisements, illustrations, posters, postcards, and a vast array of accessories. More to the point, her image has become an icon that instantly says “ART” in virtually all contexts. Wouldn’t it be hard to find another serious painting that has achieved greater familiarity? But does such commercial success really equate with success? In fact, what if anything does “Mona Lisa” really say to her audience? No one knows what her maker, Leonardo da Vinci, meant her to say. In fact, we don’t even know for sure whose portrait she is, if she is a portrait. Also, her great fame is largely confined to one broad social class, which we might identify as the cultural and visual literati. For comparison, consider the truly worldwide success of American pop music, which is heard everywhere, in all economic strata, on cassette tapes, CDs, and even on old vinyl records. When John Lennon said the Beatles were ”more popular than Jesus,“ he included Leonardo and “Mona Lisa” in his boast. And he was right.

So as well-known as “Mona Lisa” is among celebrity-aware, irony-saturated Westerners, we might venture to guess that taking the entire world into account, more people would recognize, say, the cover of “Sgt. Pepper’s Lonely Hearts Club Band,” and add to it that they would know a great deal more about it, variously including who is on it and why they’re there. Furthermore, at its first appearance, in 1966, Time magazine called the entire album, including its visual component, “a historic departure in the progress of music,” while the New Statesman said it elevated pop music to the level of fine art. These comments suggest it should be regarded at least as seriously as Leonardo’s girl. Jann Haworth, the creative director at The Leonardo showing some of her more recent works this month at Modern West Gallery, co-created that cover with her husband at the time, and like a musician who can’t get offstage without playing her big hit, it has been her fate ever since to be half the team that made what may be the most popular image of all time.

As a work of art, the cover of ”Sgt. Pepper’s” falls neatly into the movement that came to be called Pop Art, of which the leading artists and canonical works—say, Andy Warhol’s soup cans (1964) or Roy Lichtenstein’s comic strip parodies (1963)—were Sgt. Pepper’s contemporaries. How this came about is no mystery. Unknown to many Americans, Pop Art took form in London, where its first examples were shown as early as 1947. The movement, with its close links to Dada, and its characteristic inclusion of mass culture viewed with irony, couldn’t have originated here, but eventually American artists responded to this critique from their own perspective: consumer culture as seen by those who dwelled within it. In the process, they revived the popularity of painting in America, where it had been widely thought a dead art.

The official story of Pop Art can be found in art history texts, but evidence of direct cross-fertilization between British and American Pop is harder to find. Jann Haworth was, and remains, an important exception: an artist who continues to use the Pop perspective to examine private life and social institutions. Growing up with an Academy Award-winning set designer for a father and an artist mother who taught her to sew as a child, Haworth developed an unusually integrated artistic vision that she honed at UCLA before moving to London at the beginning of the ‘60s. Her pioneering invention, soft sculpture, involved sewing and stuffing instead of carving or casting. Even as Carnaby Street was providing the fashions that clothed the ‘60s, Haworth was winning awards for using needle and thread in place of chisel and brush.

In the nearly half-century since, Haworth has proved herself more prolific than her better-known contemporaries. Of the 15-odd works at Modern West (a couple are discretely kept back in another space), only one was shown in an earlier show at the Rio, and she remains someone who can fill a gallery, frequently without repeating herself. Of course, she can never entirely escape “Sgt. Pepper,” and indeed she has tucked that familiar cover image, like a visual signature, into both autobiographical and original works (as has her collaborator, Peter Blake). But if she resembles a musician in all this, it might be Bob Dylan she most closely emulates; like him, she invokes “Sgt. Pepper’s” only to comment on it. Or, as she puts it, the cover is “an icon ready for the iconoclast.”

An example can be seen in “Charm Bracelet,” one of two enlarged, soft sculptures of charm bracelets, each stretched across an entire wall. It may help to compare these very personal works with the much larger and cooler, more distanced objects of Claes Oldenburg, whose gigantic scale always refers back to his satiric view of what a monument should be: large and in the way. Haworth’s large charms are not outsized like his objects; rather, their size expresses the importance of these mementos to she whose life’s events they memorialize. Haworth has developed a highly original device, wherein she sews a pocket into a work, in which she can place something temporarily: a newspaper or photo making an even more current reference. Such a reference to “Sgt. Pepper’s”appears here, in a large, fabric envelope. But closer inspection reveals it to be a photo of SLC PEPPER, the localized and gender-corrected version painted as a mural in downtown Salt Lake City. The cover has become only more famous over the years, but its appearance in her work could be used to make the argument that while today’s postmodern artists notoriously appropriate images, no one has a greater right to appropriate an image than the artist who made it.

The gallery titles this show Round Trip, a reference to life’s having taken Haworth from western America to Britain and back. Aside from the two bracelets and “Jewels and Ring,” a freestanding set of fabric jewels, Haworth, if she chose to follow Cindy Sherman’s example, might well call most of the works “film stills.” They are framed like paintings for hanging on walls, but consist of compound layers of fabric, among them clear vinyl that causes them to resemble stained-glass window panels, or the animation cels widely reproduced and sold as souvenirs. They are, of course, neither, but are compositions in depth that activate viewers to move around, the change in the angle of view altering the composition. “She was not There” consists of three levels: a line drawing on top; zones of color similar to, but not quite matching the lines; and a background of bright geometric shapes that includes her far arm. A target—an image used by Jasper Johns in part to flatten the surface of a painting—floats freely here and underscores the point: just as the woman who appears in an advertisement or movie poster often isn’t named, so women receive far more attention for being the subject of art than for being its maker.

In “Sunset on John Wayne’s Teeth,” a close-up of the actor’s mouth with shading provided by blue denim, Haworth uses clear vinyl to make Wayne’s large, brilliant teeth flip back and forth between pearly white and a void, like a window through which the sun can be seen setting. An even stronger challenge to the legendary false promises of the West can be found in the more complex “SB: Are You Glad to See Me?” Here a Classical torso, its arms missing, displays nipples made of saddle fittings and a complicated modesty shield incorporating a cowboy hat and a section of The New York Times, with an article on the sport of rodeo, that almost cover up some colorful underwear. The nude body is made of stiffened burlap in plates that overlap like armor, as though the muscles were a kind of defensive shield.

Even more complex, “A Cowgirl Gets up in the Morning, Decides What She is Going to Do and Does It“ adds acrylic paint to the transparent vinyl surface layer, depicting the colorful cowgirl shirt, glove, and Levi’s, while her anatomy and cowhide chaps are drawn and rendered on a lower layer. Demonstrating her versatility and complete contrast, Haworth has printed “Hokusai Mini (Version III)” directly on a single layer of the same fabric, a set of Pop splotches of bright color recalling “The Great Wave Off Kanagawa,” the Japanese woodblock master’s famous print that surely rivals her album cover for the title of most overused icon in art.

Words can’t capture the visual intrigue of these compositions-in-depth. In “Red Shoes x Electra Assassin,” the figure pierces the clear vinyl support, her head, arms, and one leg emerging to join the viewer outside the picture. In “Minnie Takes up Painting,” the only appearance here of one of the artist’s favorite icons, paint explodes in swirls of solid colors from a polka-dot landscape of receding hills beneath a cloud-dotted sky. And in “Two-Toned, White-walled Buick with Cruiser-line Ventaports,” explicit connections are made between symbols of masculinity and their female references. In several of these instances, a viewer may wish that the exhibit carried through more fully with the curatorial assertion that each work recalls an important transitional moment in Haworth’s life. Instead, it will have to suffice to be told that this is the case.

Nevertheless, credit and awe go to Jann Haworth as she exploits fabrics in accordance with her two great discoveries about them: their capacity to mimic the details and expressive qualities of the subjects she uses them to represent, and their ability to liberate her from the limitations of conventional art materials. Furthermore, throughout her continuing career, the subject of her images has always been as much the medium she is copying as the objects that are conventionally rendered in that medium. Whether meticulously stitched versions of painting, sculpture, film, flesh, clothing, or merchandising display, her artistry represents both a subject and a medium in which that subject conventionally appears. The posted warning against reading these eloquently opinionated, multimedia expressions as feminist seems hardly necessary. The illusions and delusions of society and the various forms of commerce that sustain it—monetary, romantic, intellectual, and more—are all susceptible to the sharp point of her needle, and anything that can be molded and stuffed may become a lightweight, luminous prop on the stage of her comic vision.

Jann Haworth’s Round Trip is at Modern West Fine Art in Salt Lake City through July 12.