Ever since history’s first public art gallery opened in the city offices — or Uffizi — of Florence in the 1580s, a tempest has raged in the teapot of art concerning what kind of signage should accompany a display. A minority has always detested those informative wall cards that they feel inevitably come between the art and the viewer’s own impressions. Previously, they point out, the churches and private homes (often palaces) where art was to be seen didn’t require such aids. But gallery staff ever since have struggled to accept how the often ignorant audience could adequately appreciate what they saw without professional help. This may be changing, finally, and among those leading the revision are two collaborators currently showing at Bountiful Davis Art Center, aided and abetted by the center’s exhibitions director, Chauncey Secrist. Wanting neither names nor titles to distract from the work, Jane Christensen and Ya’el Pedroza’s innovative solution was to place a map in each artist’s area that lets those who wish to do so discover such things in time, all the while showing the art as the primarily visual experience it was always meant to be. For his part, Secrist has been filling the galleries with talented, innovative artists, for whom he provides no-fuss presentations that make optimum use of the building’s variety of spaces. 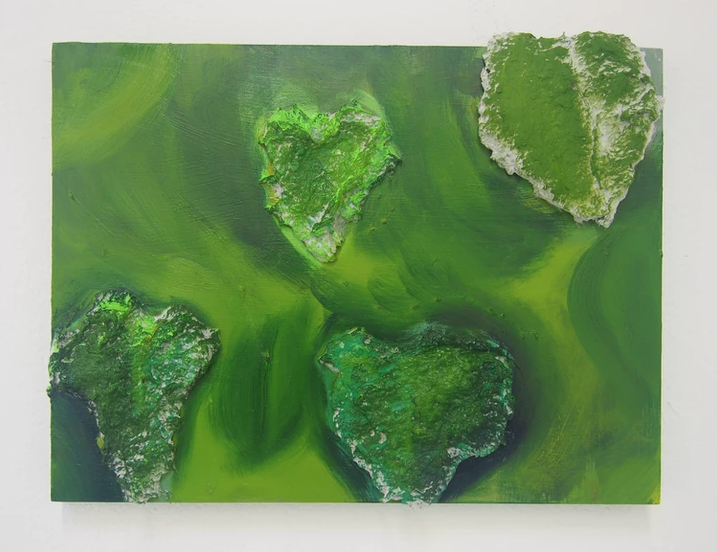 As for change as a general principle, thus far it seems to be the theme of the 21st century. Some people don’t like change. Others insist on it. These days, a disturbing trend is the sheer number of people who deny that change is happening, even as it’s taking place right in front of them … and even happening to them. Scientists believe in change, but they insist it can occur too fast. Artists like change, even when it’s frightening: they like change because they can find inspiration written on the face of it. Christensen and Pedroza are two artists who focus on change — in fact, have titled their collaboration States of Change.

Among the twenty works here are six oil paintings and two paper-pulp constructions made and painted by Christensen. Each is a close-up study of nature, one construction depicting a change happening to “Gooey Moss,” and the other, four “Floating Leaves” adrift on water. The titles of the four oils invoke environments and emotional states rather than gross botanical facts: “Spring Garden,” “Entryway Leaves,” “Thistles,” and “They Remind Me of Violets.” 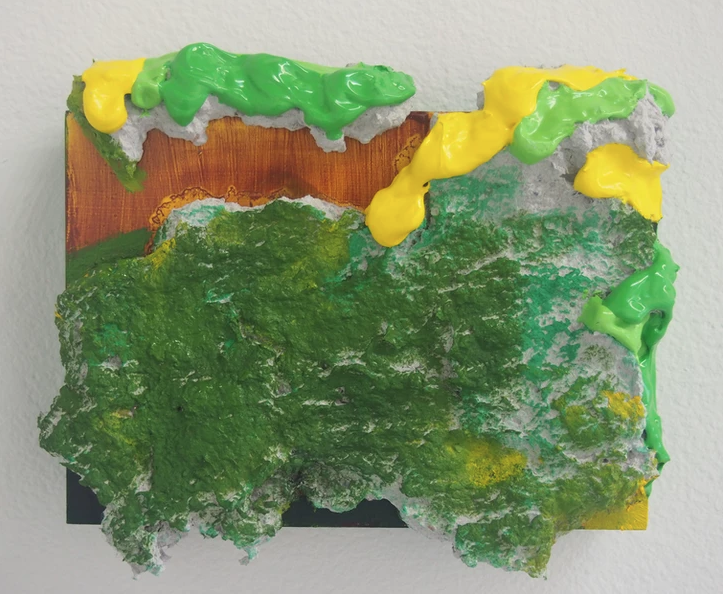 Ja’el Pedroza deploys colored pencils, ink, watercolors, acrylic and airbrush, augmented as needed by modeling paste and plastic bags. Apparently they have an array of media at hand at all times and use them freely — mixed media being emblematic of the century of change. Only a couple of works rely on a single medium throughout. Unlike Christensen, Pedroza alternates between depiction and abstraction — sometimes in the same image. In “Sun and Mountains,” symbolic signs fall somewhere in between, the sun being a cross-hatching of black lines while the mountains are shown by inverted white U-shapes. Further adding to the ritual quality — which by no means rules out a scientific purpose — smaller multiples of the sun circle the primary one. Various colored and textured areas and smaller glyphs appear decorative, or may contain esoteric knowledge. The same balance between ornament and information appears in “High Mountain Summer Heat,” where the gradual building-up of marks and textures begins to suggest some sophisticated visual code. 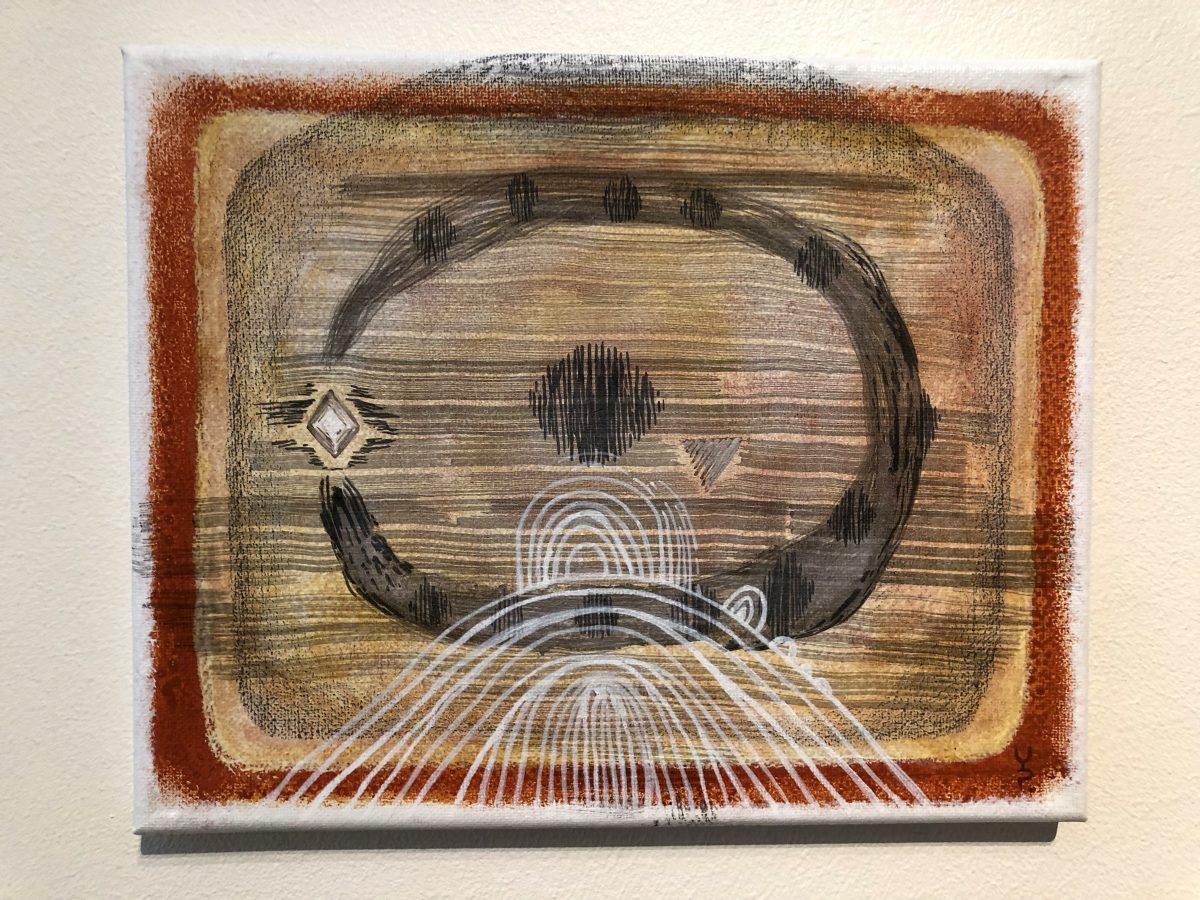 Several landscapes don’t bother to complete the transition from geometry to imagery. “Summer Fire Sky” reverses the conventional efforts by artists to precisely control paint application, instead exploiting incompatibility and under-mixing to produce a textured mountain and cloud shadows on other clouds. In “Fire Sunset on River,” the descent of the sun, shown by successive black balls, proceeds to an explosion that recalls the spectacular climax as the sun nears the horizon.

Pedroza’s vocabulary of symbols, where for example overlays of contrasting rectangles stand in for ranges of connected mountains, allows the artist to show, and viewers to perceive, the potential for active change within landscapes. Fields of restless colored lines challenge the eye to hold them still. 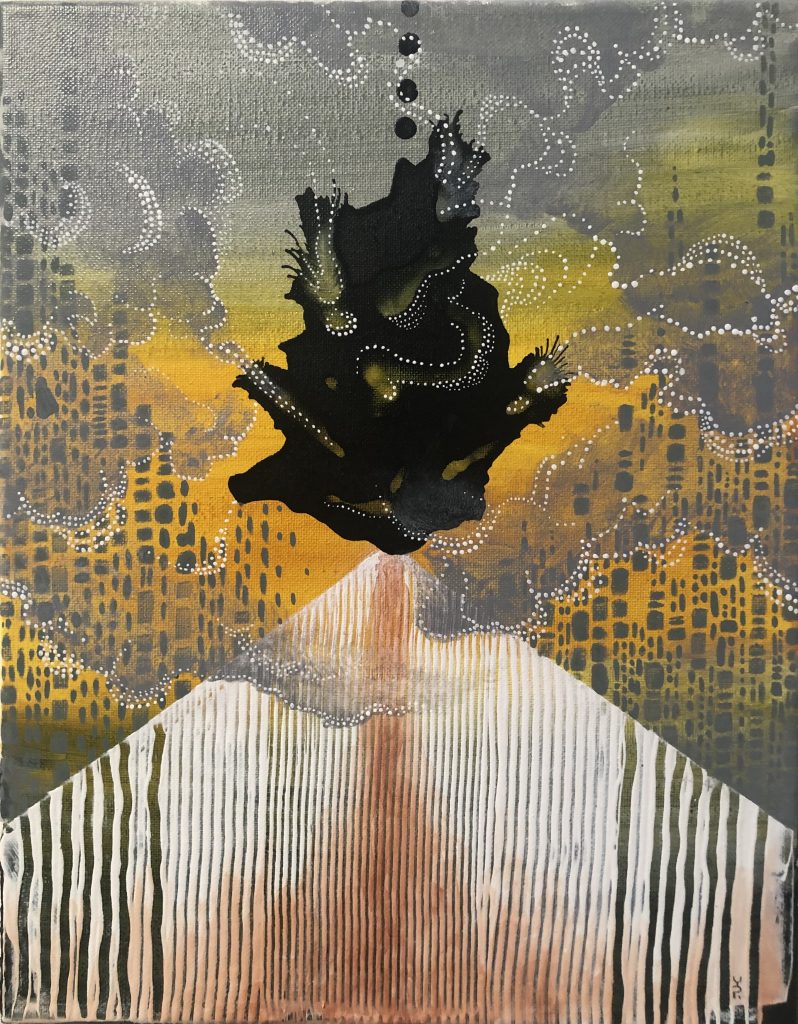 The lovely self-contradiction — and not an oxymoron — of the title, States of Change, suggests a pair of artists determined to overcome the static nature of drawing and painting without losing the perfect moment that only those media can capture and hold in place. Marshall McLuhan believed that a new medium created an opportunity for an older one to subvert it. Thus the increasingly commonplace medium of video, with its genius and its limits, may be giving artists like these a chance to supply change by implication, without requiring the audience to see it all the same way.