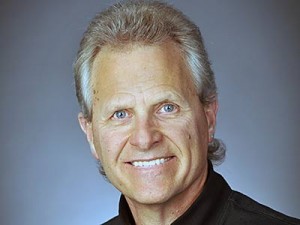 15 Bytes is pleased to announce the winner of the 2016 15 Bytes Book Award for Art Book, James Aton’s The Art and Life of Jimmie Jones, about the late southern Utah landscape painter.

Growing up in Louisville, Kentucky, James Aton had a Catholic education – grade school through college. He received an MA in English from the University of Kentucky in 1977, and a Ph.D. in American Literature from Ohio University in 1981. The now self-described “Jack Catholic” has been fully entranced by Utah’s redrock country since moving here in 1980. He is a professor of English at Southern Utah University.

Aton has twice been a Visiting Fulbright Scholar in American Studies, first in 1989-90 in Indonesia, and again in 1997-98 in the Peoples Republic of China. He calls those “the teaching highlights of my life.”

After a couple of false starts, Aton ultimately married “the love of my life,” Carrie Lynn Trenholm, the first Beverley Taylor Sorenson Endowed Chair of art education at SUU. Now retired, she is a full-time fused-glass artist. He has one daughter, Jennifer Aton Parietti, from his marriage to Jill Wilks (who would introduce him to artist Jimmie Jones). Daughter Jennifer, he says, “grew up on the rivers of the Colorado Plateau.”

The Art and Life of Jimmie Jones  (Gibbs Smith, 2015) is one of three art books with Utah connections that were finalists for the 4th Annual 15 Bytes Book Award, the winner of which receives a modest cash prize.Painters of Grand Teton National Park by Donna L. and James L. Poulton (see our review) and Branding the American West: Paintings and Films 1900-1950, edited by Marian Wardle and ‎Sarah E. Boehme (see our review) were also finalists.

You can read Ann Poore’s review of The Art and Life of Jimmie Jones here.  She recently interviewed the author about his career, writing the book and future plans.

15 Bytes: Hasn’t your interest in the Plateau resulted in some well-received books?

James Aton: I was a jock in school, and that interest in physical activity has translated into a passion for rafting, kayaking, hiking, backpacking and skiing. My love for the Canyon Country led me to my research interests–anything and everything about the Colorado Plateau. I took my first river trip in 1983 on the San Juan and was hooked. That led to my work on John Wesley Powell, then the San Juan [with Robert S. McPherson, River Flowing from the Sunrise: An Environmental History of the Lower San Juan], then The River Knows Everything: Desolation Canyon and the Green with Dan Miller, and so on.

15B: How long did you know Jimmie Jones? How did you come to write the book on him?

JA: I met Jimmie in 1980, right after I arrived in Cedar, and we became friends. I first did an article on him for Southwest Art in ‘85. Later, in 2007, I learned he had emphysema and knew he didn’t have long. I talked my filmmaker colleague and friend Jon Smith into doing a film, “Jimmie Jones: Redrock Painter,” that came out right before he died in 2009 and aired on KUED about a year later. Gibbs Smith approached me in the fall of 2010 and asked me to do the book. He knew Jimmie and had known him for quite a while, I think. Jimmie is one of the best Southwest landscape artists ever but just hasn’t gotten his due. I hope this book, along with the Jim Jones gallery in our new museum, will help get that word out, will make people stand up and take notice.

15B: Did you have trouble writing on someone you knew personally, or was that helpful?

JA: Both. It was helpful in that I knew what his voice sounded like, I knew his sense of humor, I knew how private he was, I had lots of stories in my head. The difficult part was pulling back and trying to be objective, trying to be critical where that was needed. Jimmy was just so beloved; it was hard to find his faults. He was probably one of the best human beings I’ve ever known in my life and I could find 200 people who would say the same thing. He was so much fun to be around. He was a great listener. He loved to laugh and was amazingly well-read.

15B: Was it problematic to discuss Jimmie’s life as a gay man?

JA: Just that some of his family and friends here in Cedar City would have a hard time with that. I knew it would be a touchy subject for some of his siblings — and it was — but we worked through it and they were very supportive and helpful for the whole project.

15B: What was the biggest hurdle in writing the book?

JA: For me, it was the fact that I was not an art historian. I know how to research and write and gather information and tell stories and all that. I asked Gibbs and he said that wasn’t a problem and said you’ll figure it out. I gathered a number of artists from down here and had them look at Jimmie’s work and talk about it and I recorded them as they talked – artists from the area like Arlene Braithwaite and Richard Hardin and others – and credited them in the book.

15B: Was there anything that didn’t fit into the scope of the book that you thought was really interesting?

JA: Jimmie kayaked most of the rivers of the Colorado Plateau and I had stories about those trips that got cut. I wish I had been able to put them in. But the manuscript I turned in was pretty much twice the page limit and twice the number of photos that the contract called for and they could have cut a whole lot more than they did. So I’m very grateful. That’s why they did the double column rather than single column layout with wider margins.

15B: What do you plan to write in future? Do you have a novel in you?

JA: I’m not a novelist, but I have a contract with U of U Press (with Jerry Spangler as lead author) on The Crimson Cowboys: The Remarkable Odyssey of the Claflin Emerson Expedition. In the late 1920s the Peabody Museum at Harvard became interested once again in Utah archaeology. Boston businessmen William H. Claflin Jr., and Raymond Emerson (grandson of Ralph Waldo) took a pack trip to Utah to scout for archaeological possibilities. Encouraged by what they found, they financed four years of research in eastern Utah, focusing on areas like the Green River north of the Colorado, Nine Mile Canyon and the Fremont River. The book should be out in early 2018. 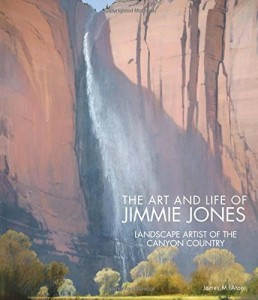 Congratulations to James Aton for his winning book The Life and Art of Jimmie Jones.