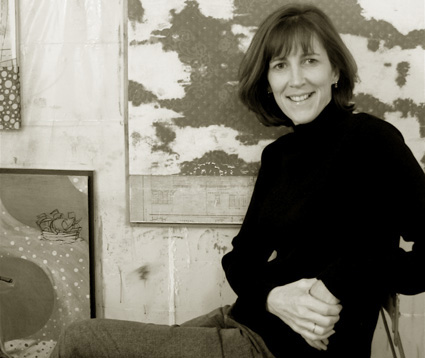 Jacqui Larsen’s art embodies the adage, “One man’s junk is another [wo]man’s treasure.” Anything discarded is inherently fascinating to Larsen, and her small home studio is a repository of articles that other people have gotten rid of but that she keeps as inspiration and treasure. She refers to her ever-growing collection as “artifacts of people’s lives.”

Larsen has always been fascinated by what people throw away. As a kid growing up in Syracuse, New York, she was chased off more than once by police officers as she mined the dumpsters behind the local strip mall. Her adult adventures into “artifact collection” have involved a few dumpsters too, but now mostly take place in the more sedate settings of thrift and antique stores. On a five-month visit to Europe last year, Larsen was delighted to pick up foreign treasures, including a love letter in perfect Italian penmanship, some old London maps, and a tiny book from 1895 in which an Irish child had sketched pictures and written poems. 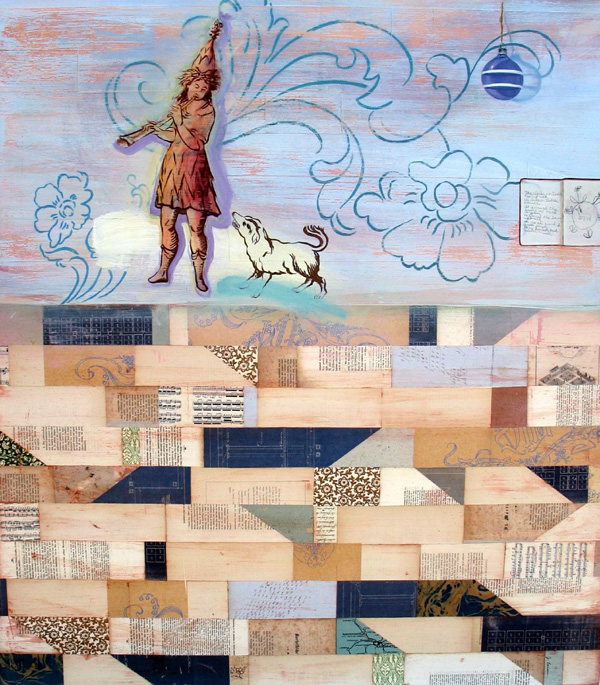 When employing these remnants of people’s lives in her work, Larsen says she likes to reflect on the people who first created or owned the objects. Musing about the multiple-page Italian letter on almost tissue-thin paper, Larsen says, “I wonder what that woman was thinking when she so carefully wrote her lover’s name?” Or, “Why didn’t someone want that beautiful, intricately carved molding?” As noted in her profile on the Utah Artists Project, “This dual role of the artifacts, being old but in the present, is representative of what Larsen says is ‘at the heart of our experience – contradiction.'” She seeks to meld these realms together with her work.

Like most artists, Larsen’s art has evolved over time. In her high school days, Larsen collected various objects to create assemblages and books with objects in them. She credits one of her teachers as recognizing her talents and encouraging her to pursue art as a career. The teacher took Larsen’s class on several trips to New York City where she was able to visit many of the great museums. Because of these experiences, Larsen was convinced she would study at the Pratt Institute, but actually enrolled at Brigham Young University, where she received both her BFA (1985) and MFA (1988) degrees. 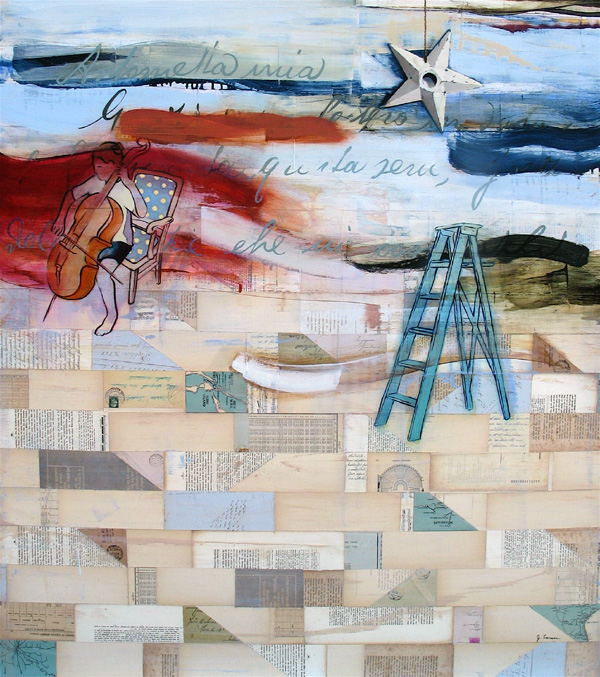 During her time in school, Larsen detoured from her love of found objects and focused on the formal art training offered by the program. She says the courses honed her sense of discipline and pushed her to learn classical techniques. She was pleased with her MFA show, but notes that some observers were not. Laughing as she remembers the story, Larsen recounts how she was sitting unnoticed in the gallery when two older women sat down to look at her work. After glancing around, one of them commented huffily, “I can’t believe they’re showing this stuff at BYU. This artist is demented!”

After school, Larsen once again felt free to pursue her passion of collecting and using artifacts in her work, though she expanded her medium by using her BYU-enhanced painting and drafting skills. Joseph Cornell, one of the pioneers of assemblage, is someone Larsen cites as having had a major influence on her work. She owns his books and has studied him intensively. When she later lived in Houston, Larsen visited museums there to see his work first hand.

After her experimentation with assemblages, Larsen began using canvas as her background, but still incorporated materials from other people’s lives. She would hang items from the bottom of the frame, add lines of string, or sew pieces of paper to the canvas – sheet music, ticket stubs, grocery savings stamps, and photos. Sometimes her pieces were interactive. Larsen has one such work hanging in her home that features an old photo of her mother on a bicycle — the hub of the front wheel is the knob of an old music box which plays “Somewhere in Time” when wound. 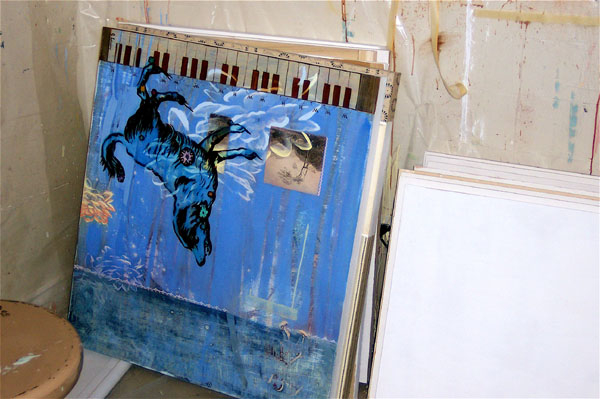 Larsen also began exploring wood panel as a base for her work, incorporating fabric, tissue paper sewing patterns, textured vintage wallpaper, and painted figures and items. She adheres fabric pieces or paper items to the panel with acrylic medium so she can paint over the top in oil or sand the surface down – or both. All her work is composed of layers, literally and metaphorically. She spends most of her time getting the base the way she wants it, with various layers moving in and out and around each other as she adds and subtracts. The final top layer often evolves in just a few days because she has an established background.

Larsen says that when she works she finds herself “exploring childhood, sisterhood, and maternity in ways that question western traditions of idealism. By replacing representations of femaleness with images of everyday women, I hope to piece together new myths and narratives.”

Larsen’s latest work is showing at the Rio Gallery through April 28 as part of the Utah Arts Council’s 2006-2007 Fellowship Recipient Exhibition. She calls her pieces “paintings on collage.” Not unlike quilts, the foregrounds of three of her larger works are pieced together using geometrical paper shapes cut from texts, old envelopes and letters, maps, sheet music and blueprints. And instead of found objects attached to the panel, Larsen has painted them trompe l’oeil. Vintage glass Christmas tree ornaments, books, stars, and ladders cavort merrily across the upper reaches of collages fancifully titled “Sky with Hanging Baubles,” “Voices Above and Below,” and “Song of Small Things.” 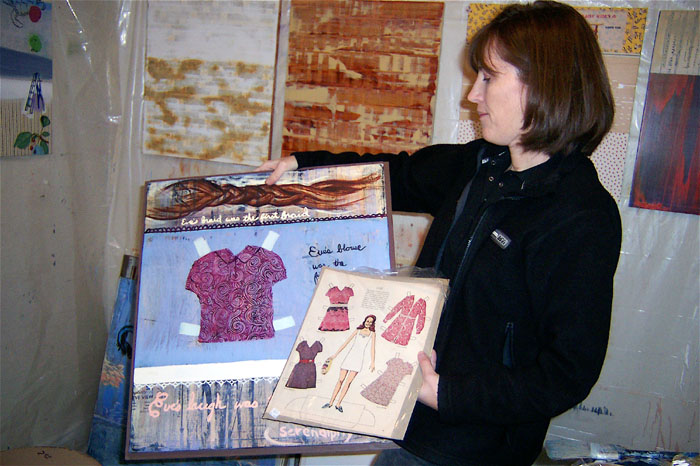 When gazing at “Song of Small Things,” one quickly notices the depiction of a small open book in the upper right hand corner because it is clearly the work of a child. Closer examination reveals that Larsen has replicated two pages of the tiny Irish book she found on her European trip. In order to faithfully reproduce the writing and drawing style, Larsen used a special projector to cast the image on her working surface where she carefully traced the letters and drawing.

Larsen is currently working on a new series of pieces that will be shown in the main gallery at the Kimball Art Center June 2 – July 15, 2007. Now that her four children are all in school, Larsen is able to work during the day, instead of early in the morning or late at night. She typically works on 5-10 pieces at once while they are lined up on her studio walls. She constantly reevaluates each one as she repeatedly alters the layers or adds colors. One gets the impression that Larsen actually tends her collages like her children, assessing their needs and offering opportunities for growth. When referring to an extra quantity of mixed paint, for example, she wonders “who” could benefit from the added color and whether “someone else” needs it more. Also like children, Larsen says her collages take unexpected turns sometimes. For example, she was “surprised when a ladder decided to jump onto the panel upside down in the sky” on one of her pieces at the Rio. One has to wonder if the artifacts she uses carry some human mischief into their reincarnated lives in Larsen’s studio. 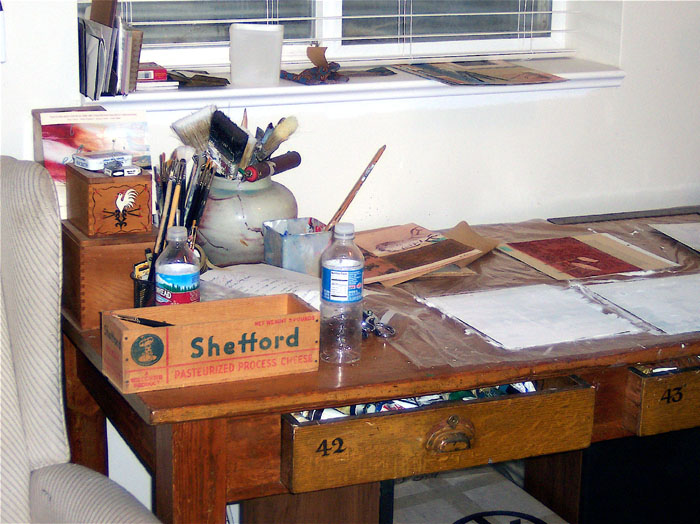 Larsen says she works in “binges” and in “crisis mode” when she is getting ready for a show. Like many artists, looming deadlines have caused her to take desperate actions – like frantically using a blow dryer to avoid handing over work encased in “Wet Paint” barricade tape.

In stasis mode, Larsen spends her days tending to her family and other interests. All six family members play the piano, for example, and a beautiful grand piano sits prominently in her living room. Larsen is also an avid reader and counts the following among her recent reads: Theories of Everything: Cartoons by Roz Chast; She Got Up Off the Couch, by Haven Kimmel; Gilead, by Marilyn Robinson; and An American Childhood, by Annie Dillard. Her community involvement includes sitting on the board of Art Access/VSA arts of Utah and being an advisory board member for Gallery OneTen in Provo.

When asked about future plans for her artwork, Larsen is enthusiastic about collaborating with her husband, writer Lance Larsen, whose latest poems are always on her reading list. The two of them imagine a project wherein Lance would offer a line of poetry, Jacqui would begin a collage based on those words, Lance would add lines to his poetry based on Jacqui’s image, and both would continue the dialogue until they felt the work was complete. Jacqui and Lance have already collaborated on a book published by Lance in 2005 entitled In All Their Animal Brilliance. Jacqui created the cover painting, which is currently hanging at the Rio with her other work.

Professional admiration of Larsen’s work is clearly evidenced by the awards she has won, despite her “demented” beginnings. In addition to receiving the Utah Arts Council’s Visual Arts Fellowship twice (1996 and 2006), she was selected by Lowery Stokes Sims, former curator at the Metropolitan Museum of Art, to represent Utah in The Deconstructed West, a four state fellowship exhibition at the Millennium Arts Center in Washington DC (2001).

When asked to distill her work into words, Larsen quotes one of her favorite writers, Annie Dillard. “As a life’s work, I would remember everything – everything, against loss. I would go through life like a plankton net.”

Larsen adds, “I want to put it all in, till my paintings sing and gossip in languages I only begin to understand.”