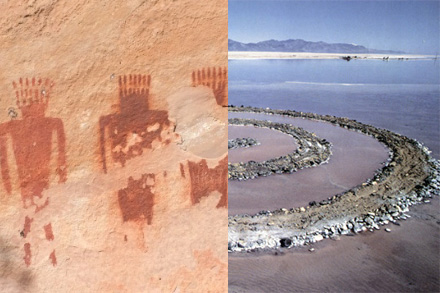 A report from Utah’s 2017 legislative session

You probably know Utah has a state bird (seagull) and a state flower (sego lily), but did you know there’s also a state rock (coal), a state fossil (Allosaurus) and not one but two state vegetables — a historic one (the sugar beet), and a current one, the Spanish sweet onion. In fact, there are 27 official state symbols recognized by Utah; and with some strokes of the governor’s pen there will be a couple more, both of them art.

At the beginning of this legislative session, Rep.Rebecca Edwards, R-North Salt Lake, proposed that Utah recognize Robert Smithson’s Spiral Jetty as the state “work of art.” Not to be outdone, a week later the Senate introduced its own bill, via Republican Sen. David Hinkins, naming “Native American rock art” as the state’s “works of art.” Talk about old school versus new school. The Senate bill passed first — it’s hard to imagine one artist from the 1970s being able to compete with millennia of art from multiple cultures, after all. Smithson didn’t completely lose out, however. The House bill was amended to declare Spiral Jetty the state work of “land art.” Take that Sun Tunnels. Both await the governor’s signature; then junior high kids can add them to the list of important state symbols to memorize.

The other art news from this legislative session was appropriations. The Beverley Taylor Sorenson Arts Learning Program and POPS were the big winners. UDAM, Discover Gateway, Cache Valley Center for the Arts, The Leonardo, Center Point Legacy Theatre and Salty Cricket all got at least a portion of their requests. The Rio Grande Building will receive $130,000 for increased security. And the Historic Rockville Bridge in Virgin (remember our story on that?) got $100,000 for its preservation. Some orgs who were disappointed this time around: Spyhop, hoping to construct a new building; the Sundance Institute; Hale Center Theater (both the Orem and West Valley City/Sandy versions) and the Mesa Project near Zion National Park (see a full list of arts-related bills and appropriations at the Utah Cultural Alliance website).

That wraps it up for Utah. Now our attention turns to the national scene, where the National Endowment for the Arts may be on the chopping block. If its $146 million budget were slashed, the military could buy an extra F-35B fighter jet.