It’s All Utah, All Landscapes in Billy Schenck’s Stellar Exhibit at Modern West 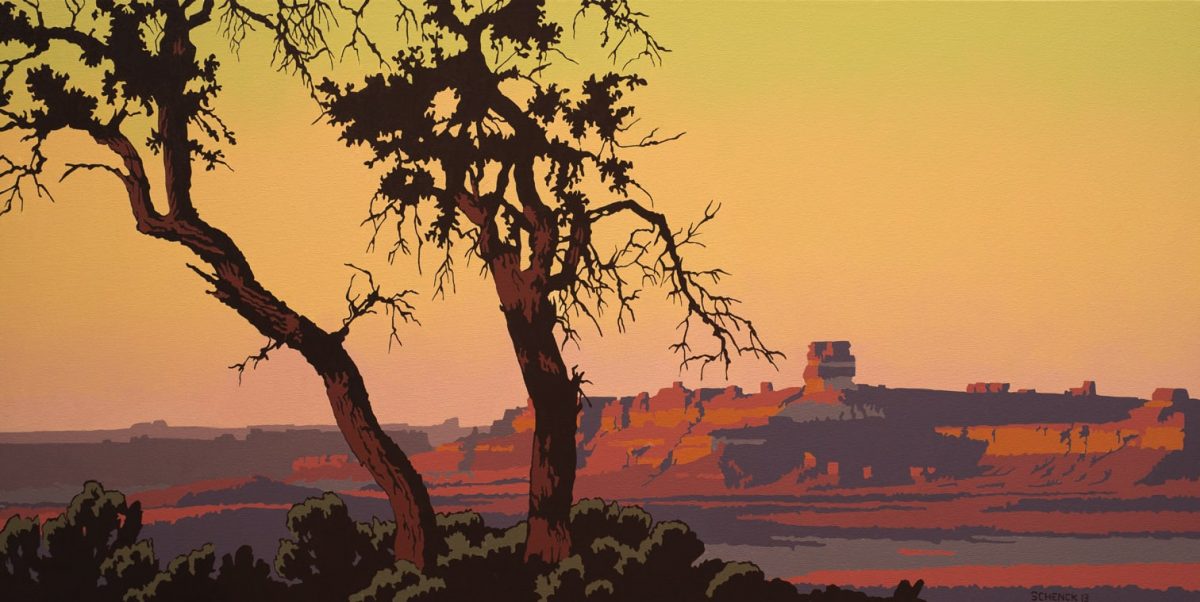 Schenck’s Utah: A Land Less Traveled, Billy Schenck’s astonishing all-landscape solo exhibit — a first in his successful 52-year career as a Western artist — is already half sold out, says Modern West Fine Art’s director Shalee Cooper, who conceived the strictly landscape motif and convinced the artist of its viability. (Schenck calls Utah his favorite place on Earth, so wasn’t difficult to persuade.) There’s nary a nude cowgirl astride a stately steed to be seen — in the main gallery, anyway.

The areas of Utah this artist paints aren’t merely carefully chosen; they are crafted into scenes created to wonder and marvel about; there will always be something to ponder in any of these 19 rich and riveting masterworks. In the absorbing “Highway to Shonto,” 2021, o/c, 45 x 35”, Schenck takes us down a red sand road running parallel to finely captured barbed-wire fencing tacked to dilapidated posts leading past a towering sandstone butte embraced by clouds you swear you can see moving slowly across the sweeping soft blue sky. The surrounding sandy ground is covered with gently rendered chaparral in various shades of green and gold; dark shadows of plant life, primitive fenceposts and wire stretch artfully across the rutted roadway. In “Caution – Hot Cows,” 2021, o/c 30 x 30” one gets it all – mesas, mountains, a stellar leafy cottonwood and several elegant cows seeking its shade, though only two are facing outward – a third is stretched on the ground with his, ‘er, backside emphatically pointed to the viewer. There is marvelous shadow work and a massive cloud-filled sky, too. 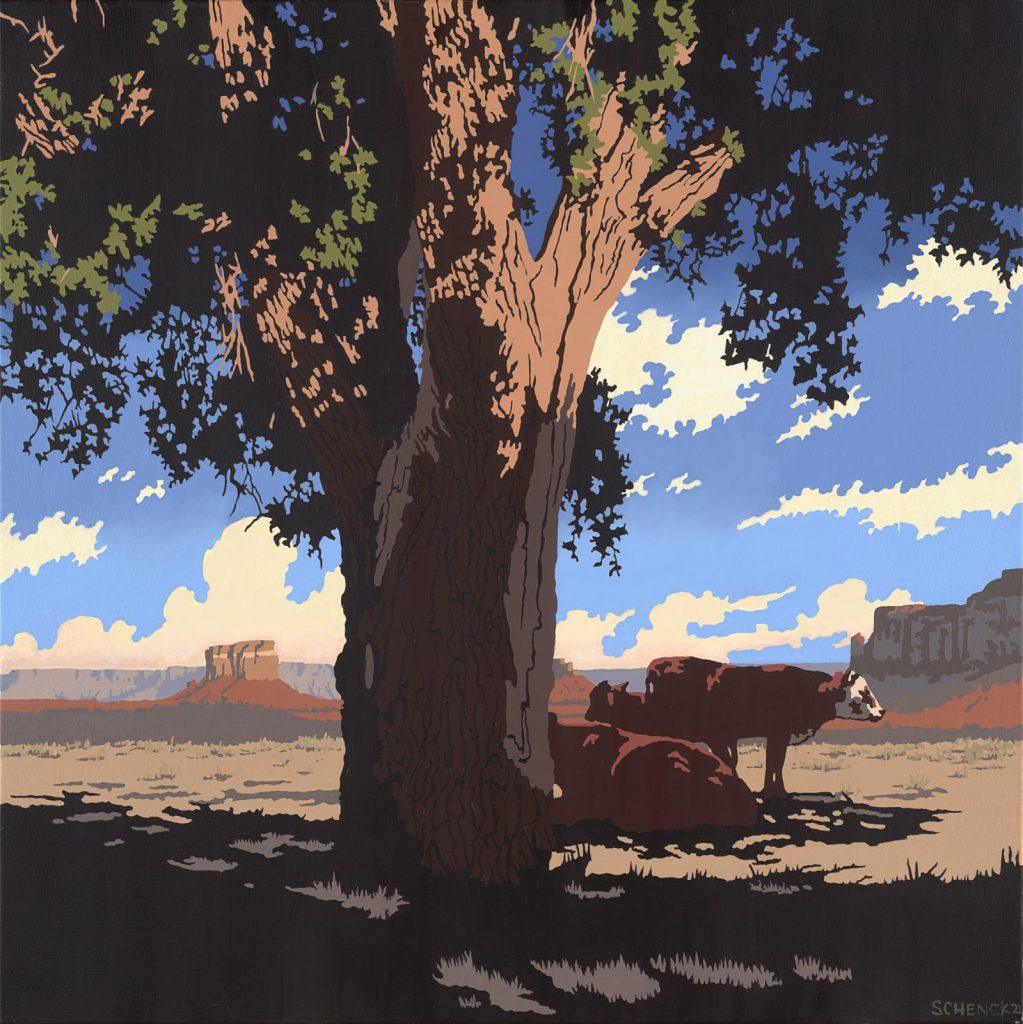 Although he works from slides, selecting the elements for a single painting from the numerous images that he shoots in a variety of locations (and sometimes more than one state), Schenck’s clouds are always his own, he says. Usually big and billowy, they mushroom fairytale-like over mountains and mesas with wispier versions highlighting ghostly tree branches or resting cattle and flitting across electric blue skies in the artist’s nearly trademark paint-by-number style. His use of color in these current works is seemingly magical: a restrained but rich palette gives a perfect painterly authenticity to the desert scenery.

Cooper says she wanted this purely landscape show because she feels Schenck’s work “is so compelling that it doesn’t always need a punch. It’s just so moving, and he captures the West like no other artist. He speaks stylistically to who he is as an artist. He has said he is a man without a country; he doesn’t feel that he fits in any genre. Billy has created this reality that he lives in, and I wanted him to push that and convey that to his viewers. It’s an opportunity for us to experience it, be a part of it through his work.”

“I was a hit-and-miss painter as far as landscapes were concerned,” he says of getting ready for this show. “I had done some good ones back in 2000, 2001, 2002, and I had some good ones going and I suddenly felt I had turned a page and could resolve them in a way that was a little more profound than what I had done in the past. I have to look to other artists to see how they resolve things. I can appropriate and recognize how that particular person might have resolved that situation.” So, when he’s having trouble resolving his work — as he did with the foreground of his showstopper “Lone Butte”: “I’ve got two or three or four shadows and five degrees of separation on a paint-by-number system, I’m doing these washes and I’m losing my values . . .” he asks, “What would N.C. Wyeth do? What would Ed Mell do?” and then aptly works through to his solution. 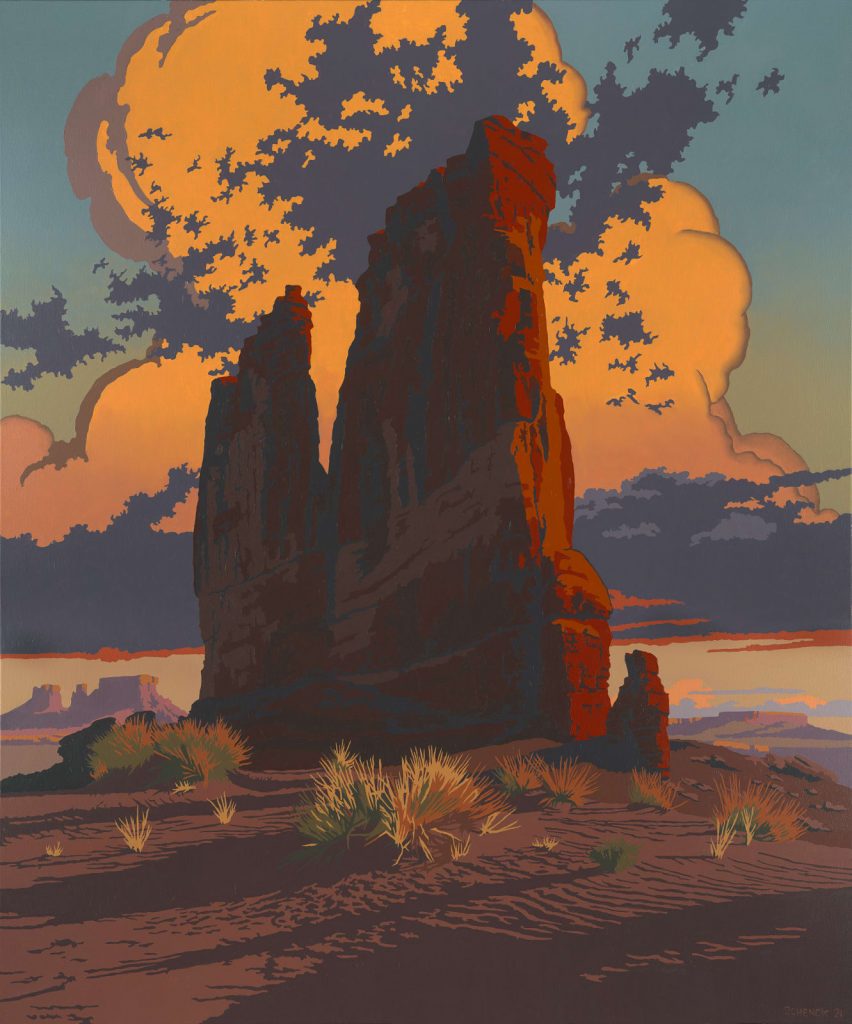 Legend has it that Schenck was born in Two Guns, Arizona in 1947. He spent his childhood summers exploring deserts near Lander, Wyoming. He attended Columbus College of Art and Design from 1965-67 and admittedly flunked out, but then received his BFA from the prestigious Kansas City Art Institute in 1969. “Then, when I started thinking about graduate school, I decided there was only one that was the best: Yale.” Everyone he knew got into the Ivy League college, but not Billy. So, in 1970, he moved to New York City, instead. There, he was considered part of the original school of Photo-Realism and a founder of Western Pop Art. When he was 24, his first solo show in New York City sold out. In the mid-1970s, the work exemplified in his paintings drew him back to the West, where he split his time between Wyoming and Arizona.

Schenck, who holds a world championship in ranch sorting (a type of rodeo), now owns a working cattle ranch in Santa Fe, N.M. He and Rebecca Carter, his partner of some 17 years, live in a home filled with fine Western furnishings and a massive library, two studio cats (Azul and Speedster), and a feral, which she calls Frenchie.

Early in his career, Schenck became known for utilizing cinematic imagery, reproduced in a flattened, reductivist style, where colors are displayed side-by-side rather than blended or shadowed.  Schenck’s signature reductionist style “has transformed traditional Western images from a realist’s replica of detail into flat, sharply defined, simplified areas of color and stylized patterns,” says Cooper. He made paintings based on black and white movie stills of Hollywood Westerns. “The single most influential artist of that era (for me) was the Italian filmmaker Sergio Leone, who literally altered the course of filmmaking with his trilogy of Spaghetti Westerns. I wanted to do with paintings in the Western genre what Leone had done with film,” Schenck says. 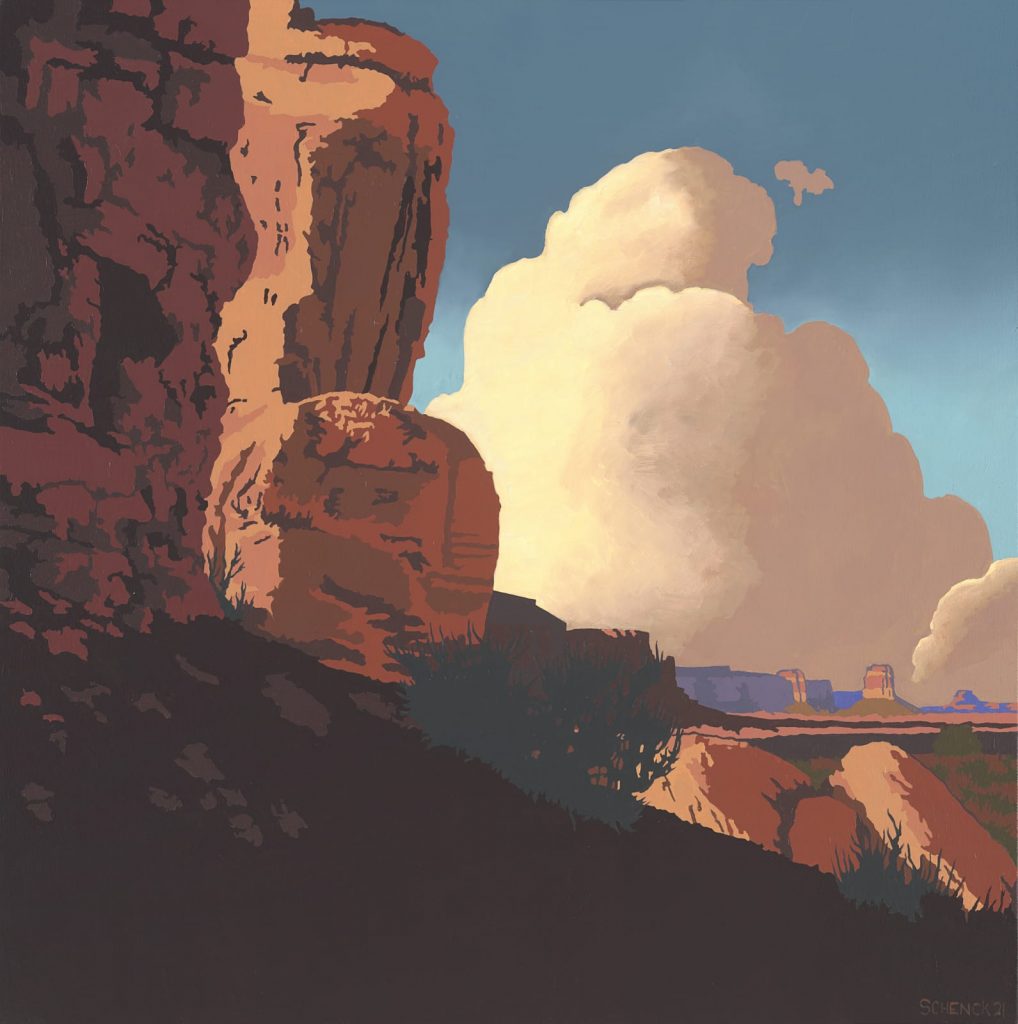 His satirical, usually tongue-in-cheek works challenge the romantic notions of the West that he trumpets in his landscapes at Modern West: “But you have to trust me. I’m a white man,” reads one. Others some may find more galling. His art incorporates techniques from Photo-Realism and Pop Art to both praise and mimic classic Western images. “My caption paintings are all irony and metaphor and satire, and it doesn’t catch up to me in such a way that I am part of … cancel culture,” says Schenck. “My studio assistant is Potawatomi and Muskogee Creek and he’s from Oklahoma. He discovered my work in high school in 1986. I have a huge Native following; my point of view isn’t White Anglo,” adds the artist.

With this stellar show, up through March 11, Schenck can leave irony, metaphor, and satire behind, and simply revel in the Western landscape he has come to love. “I’m represented by a lot of different people around the country, but Shalee is so animated and kept responding to my landscapes when she came to the studio and wanted to do a show,”  Schenck says. “I said, ‘I’ve done 120 solo shows and I’ve never done a solo landscape show in 52 years of my career. This is brand new.’” 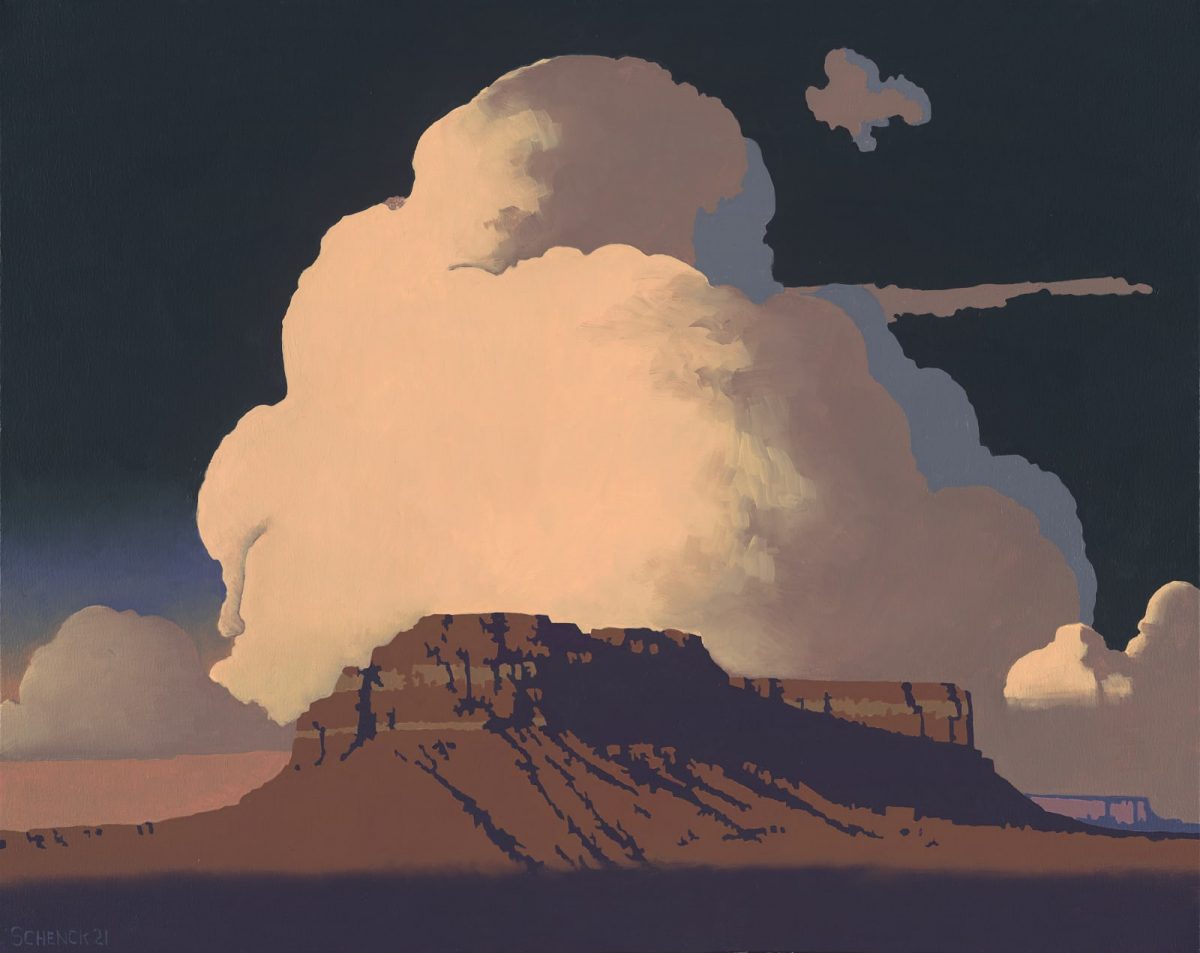