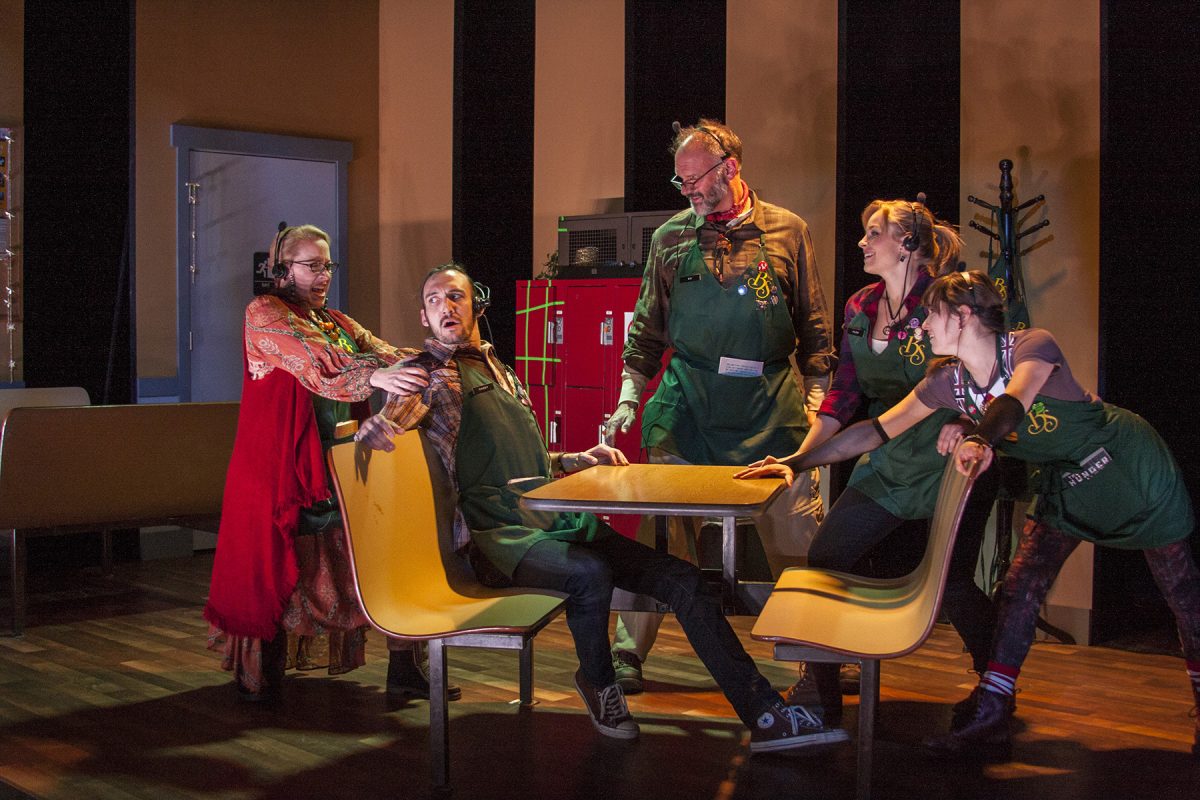 Been there, done that. Many of us have, I’m sure.

“I don’t know the title or the author but I can kinda tell you what the cover looks like. Can you find it for me?”

Those aren’t the precise words from Rob Tennant’s first play, Booksmart, but you get the gist: customers making outrageous demands of frazzled bookstore employees in the midst of the Christmas rush. One of them (Casey, played by Tyson Baker) decides to go on strike (for what, he isn’t exactly sure) by staging a sit-in in the breakroom, urging his equally underpaid and overeducated co-workers to join him in this class struggle. Marx and Engels, he discovers to his chagrin, are out of stock until January.

It’s hard to be amused by a play after watching a massacre unfold for seven hours on MSNBC, but some smart dialogue and good acting helped. While Tennant occasionally gives his characters too-long paragraphs that can lead to rushed delivery – and the play’s ending is just a bit abrupt if quite tidy – the play is well-conceived and well-written. 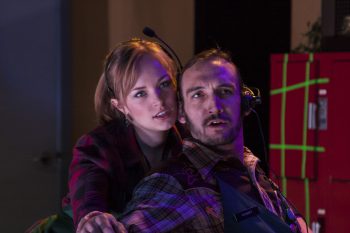 Interaction between Baker (who did an effective job of carrying this production) and Sarah Danielle Young (Alex) was strong and seemed genuine. She admits to having had “more than two but less than 10” majors in college but settled on art: “I have a lot of interests. Art was the only one that allowed me to explore them all.” She conveys impatience, exasperation, and tenderness toward Casey, though how she feels romantically about him is never quite clear.

Anne Louise Brings was a delight as Cindy, spunky and a funky dresser (thanks to Aaron Swenson), besotted by The Hunger Games, or maybe just the films (but then she does work in a bookstore), someone who fancies herself as Katniss Everdeen who fancies Peeta (though she does seem to hunt, in a well-acted scene, with Gale as played by Baker), but it was a little confusing – that might have been Peeta, not Gale. (There was an apparent dream sequence in the play, too – featuring all the players, where I got a bit lost. No doubt my bad.)

Another actress that always had my attention was April Fossen as Ruth, a “mother” whose art degree and many years of college teaching as an adjunct (“That’s Latin for ‘no benefits’”) have left her stuck at another low-paying job without benefits. She’s perfection in the part. 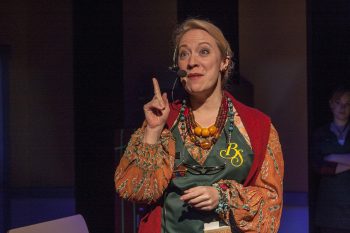 Hippie Ed (Joe Crnich), management but never in charge, is always stoned, which makes for some extremely funny exchanges in the breakroom. Ed learns from a customer about Solstice, the Pagan holiday from which Dec. 25th festivities are derived. He’s fascinated, but appalled when he learns the customer is buying a book to prove this to his mother. “Maybe Christmas isn’t the right time for a religious intervention,” he pleads. “Has she read The Christmas Box?”

The sound design shone. You won’t want to be TOO early, as you will be listening to every conceivable version of the red-nosed reindeer song in recording history. That theme, though, carries evenly into the production, as it is playing constantly in the bookstore. Any time the breakroom door opens, the song blares forth, but just until the door closes on it again. Remarkable work by Cheryl Ann Cluff.

It wasn’t an evening of perfect theater, but Thursday was a tech rehearsal and flaws undoubtedly were corrected by opening night. Director Jerry Rapier clearly was seeing to that immediately after the performance. He cares about his company – and his audience.

A grant from The David Ross Fetzer Foundation for Emerging Artists (The Davey Foundation) to playwright Rob Tenant resulted in this Plan-B Theatre production. Four short films produced from foundation grants will be premiered December 15 at the Tower Theatre in Salt Lake City. For tickets and more information about foundation grants visit thedaveyfoundation.org. 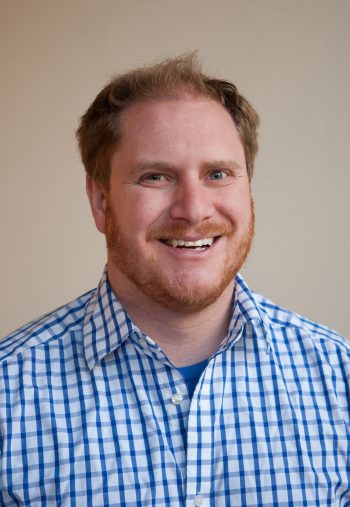 “Booksmart” a play by Rob Tennant at Plan-B Theatre, Rose Wagner Performing Arts Center’s Studio Theatre, Salt Lake City, through Dec. 13, planbtheatre.org or 801-355-2787. All performances sold out. A pre-paid wait list will begin one hour prior to show time. You must be in the box office to be added to the list. At show time people will be seated, in order, in any open seats. Others will receive full refunds.