For the past month, the Springville Museum of Art’s exhibit Objects of Reverence has presented the work of SUU professor Brian Hoover. On exhibit until the end of October, Hoover’s art is represented by about twenty pieces, hanging in one of the museum’s ground-floor galleries. The pieces cover various periods or styles in the artist’s work, though all are dominated by an adept use of the figure in a landscape setting.

Hoover can definitely paint. He knows his way around a landscape and a figure, but he hasn’t been swallowed up by the narcissistic thrill of a talented artist — “Gee mom look how good I can draw.” Hoover can get his figures down, but it is what he does around those figures that is the most fun — and, despite the title of the show, the least reverent.

Narrative figurative art, once the apex of western art, slowly saw its demise with the development of modernism, the figure becoming simply one of many possibilities for pursuing formal resolutions. With postmodernism, however, the figure has made a quick return. The postmodern proclivity for raiding the attic of art history to adopt, transform, mutate or even sacrilege a former style, has seen the figure come back in full force. Ransacking art history has made the narrative no longer naughty and has given the figure the strength to nudge aside the flat picture plane in the postmodern pantheon.    The aesthetic crux of this postmodern raiding, however, is whether one can make a former style one’s own, transform it and bring something new out of it rather than simply rehashing it in a nostalgic frenzy.

Hoover’s work seems to be an attempt to do just that. “Objects of Reverence” presents paintings done in various styles over a number of years, dealing with formal and narrative issues trying to make the use of the figure and the story the artist’s own. And best of all, through it all, they’re enjoyable. Hoover is a man of the postmodern age, but he is not some bored latte-drinking, ironically detached postmodernist.   Hoover’s works are full of subtle qualities — wit, violence, wonder, irony — made strong by juxtaposition. And behind the joke and the scare, I think Hoover is, like the best of artists, searching for the truth.

Hoover’s work obviously borrows from the Symbolists of the late 19th-century, but it also reaches back to the Pre-Raphaelites and to the Italian primitives for its stylistic influences. Yet the works maintain a crisp, clean, contemporary feel, with hints of a sci-fi book cover aesthetic. His is an art that would feel more comfortable depicting Dante chasing after Beatrice, rather than simply gazing up at her from beneath the window.

A comparison to Dante is not far off. Hoover has by no means reached a visual poetics to match that of the Florentine, but he does have some similarities.   Dante’s best moments, what keeps him readable to this day, is that in trying to reach his poetic arm up into the heavens he wasn’t afraid to get his pen dirty in the more base qualities of humanity. The only part of the Divine Comedy anyone really reads, at least with any pleasure, is the Inferno, where Dante’s poetry can revel in the earthiness of the nether regions. His anger, wit, humor, and satire come to full bloom in the Inferno. But these aspects of his work by no wise diminish the quality or the message of the whole.

In a similar way, Hoover seems to me an interesting painter because a sly sense of wit slips into his pieces. In Hoover’s Harbinger series, the focal point of the exhibit in Springville, the most exciting passages are not the celestial beings hovering above the ground, but the earthly beings beneath them. In each of the Harbinger paintings “landscape, academic flesh, and an allegorical animal” are used to symbolize a season.

The best passages of the paintings are beneath the floating figures. In Spring, the frogs which encircle the foreground are a nice use of allegory, but the detail of the broken caked mud from which the frogs have recently plopped themselves is an observant and delightful touch. The fish showing through a mountain stream in Winter is simply beautiful. My personal favorite of the series, however, is Summer.

What makes this painting a delight is that while, like the others, the painting is quite beautiful, with its Harbinger of the season floating above a winding highway in a beautiful landscape — something near Capitol Reef, maybe — below the hovering Harbinger is the road kill. And this is not just a sly allusion to road kill. Hoover has one eye of the poor beast rolling away from the body. The humor, or better, bathos, is not slapstick.   Juxtaposed with the overall beauty of the painting and with the driving truth of the observation — summer time is about hitting the highway and the creatures that cross them — the gory attention to detail creates a great balance between the sublime and the silly.   Through all this balance, Hoover’s attention to formal qualities remains — notice that the flies hovering over the carcass mimic the hummingbirds hovering around the Harbinger.

This is the down-to earth quality — literally in the case of the frogs arising from their crypt — that makes Hoover a delight. With his keen sense of observation, his insightful wit and his delicate brushwork Hoover is Brugheul meets Rossetti.   He knows that high art doesn’t have to be high seriousness. In fact, some of the most serious things can only be said behind a joke. 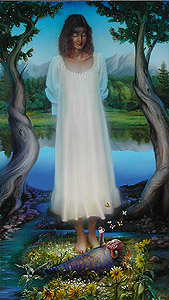 Wit is not the only element to subtly work its way into Hoover’s works. One work can be fun-loving and the next one may be filled with some disturbing dark foreboding. Hoover is attempting to be jarring, whether it be by juxtaposing the comical in the serious or the dark in the tranquil. He paints with very fine surfaces and attractive color work, all to the pull the viewer in. At closer inspection, though, there is always something a little off kilter. Hoover’s piece Bristlecone reminds me somewhat of the illustrations for a Jehovah’s Witness pamphlet, but the cocoon baby and the tension between it and the nightgown-clad women disturb what might otherwise be a fairy-tale image of motherhood.

While this type of tense juxtapositioning works great in the paintings Objects of Reverence as an exhibition is unfortunately less successful. The exhibition seems a bit chaotic and incomplete. I imagine that this is more the fault of the Museum than of the artist. If anything, the exhibit may have been premature. The Harbinger series itself is missing one important element, Autumn, which Hoover says is still in his studio. Hoover seems to be going in some new directions and I feel like I would have preferred to let him get there before putting on this exhibition. Some of the other works displayed go fine with the Harbinger series. But some are simply out of place or just weak. There is a landscape, sticking out like a sore thumb. Though it is painted aptly enough, it seems to serve no other purpose in the exhibition than to convince the landscape-loving public of Utah that this guy is all right, he can paint landscapes too.

A few of the works are from an early period in which Hoover experimented with some technical means. Hoover first spills and splashes liquefied paint onto a canvas, after which he begins looking for images in the spill and renders a narrative in a more traditional manner. If memory serves, I have seen a couple of these which seemed successful, but most of the ones in this exhibit seemed somewhat forced. I applaud Hoover for taking some formal risks, but I think he is best served when the juxtaposing sense of tension comes from narrative elements in the works rather than technical ones.

Brian Hoover seems to have found something useful in his raid of the Art History attic. The works in Objects of Reverence points toward the maturing of a style that may show us that Western art may still have something to give us in the 21st century.

Hoover says of his work: “ In the postmodern sense, I appropriate imagery from the ancient past to popular culture. I am particularly interested in late Gothic and early Renaissance paintings. These works convey more than just descriptive imagery. They were beautiful, powerful, and often fearsome objects of reverence. I use intricate patterns, precious metals, and enigmatic imagery to recreate a sense of powerful myth and magic in the hope that I may create my own objects of reverence.” He does this best when he is being just a bit irreverent. 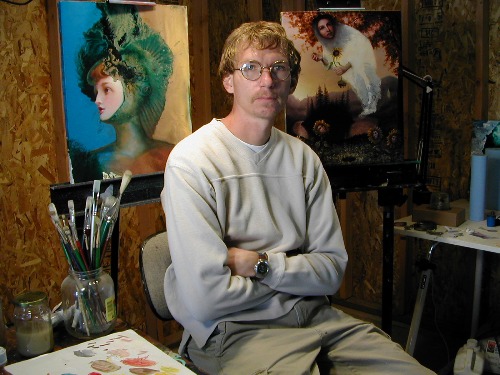 Brian Hoover received undergraduate training in art from the Cleveland Institute of Art and then earned a BFA from Kutztown University, PA in 1988. He received an MFA in printmaking from the State University of New York at Buffalo in 1990. Currently Chair of the Art Department at Southern Utah University in Cedar City, Utah, he teaches Painting, Printmaking and Drawing.