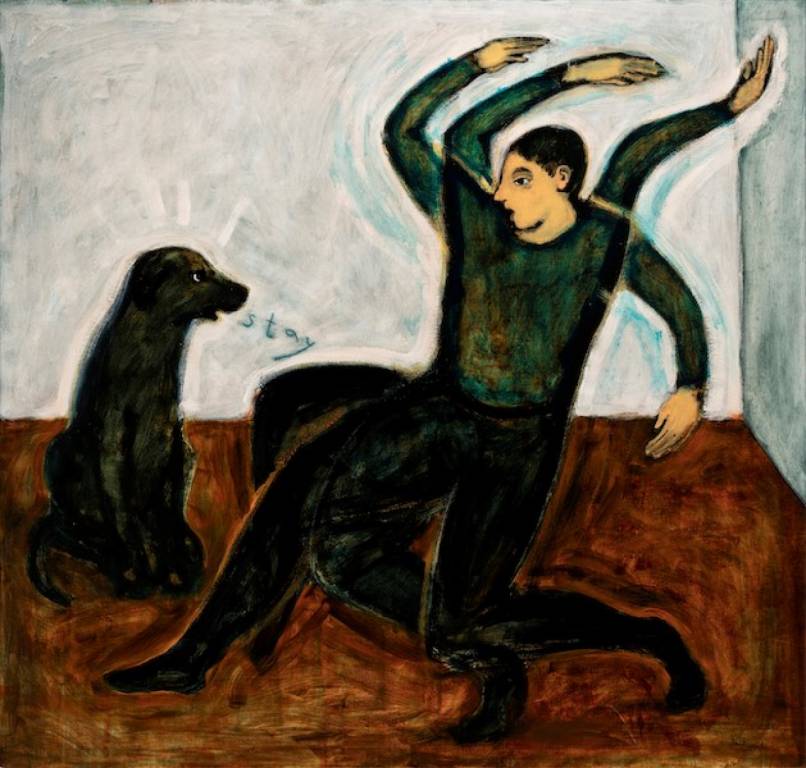 New work by Brian Kershisnik is always eagerly anticipated, and not just in Utah. Increasingly, his collectors fly in from around the country in February, hit the slopes, buy a painting or two, then head back. The art used to wait to follow them until the show was over, but even before the pandemic helped replace the in-store experience with shopping online, Susan Meyer had decided to allow peripatetic collectors to buy right off the web site and take their art straight home. It’s already essential for anyone wanting to truly appreciate a work of art to see it in person, and now to hurry as well.

Kershisnik has always been an artist of gravity, so the serious turn he’s taken recently is unlikely to alarm his public. He’s painted comedy, but never tried to provoke laughter. Consider the dogs who appear in three of the 25 works at Meyer as this is written — but may be gone by the time it’s read. Each commands, asks, or begs its master to “stay.” It’s not a joke and it’s not funny; it’s heartbreaking in light of our dawning realization that our pets lead lonely lives in spite of our love. Then again, Hollywood once found comedic gold in the idea of domestic referees, but Kershisnik’s “Apologetic Referee” isn’t an expert sent in to save a marriage: he’s everyone who’s ever tried and failed to repair what cannot be fixed.

As far as these new subjects are concerned, it’s surely not trivial that the nervous magicians and their audiences that filled the painted stages a few years ago have been replaced by more obviously anxious or melancholy figures who whisper secrets to each other, walk reluctantly at night, or bear an “Invisible Burden” in the dark. Kershisnik’s performers, including his acrobats, have usually felt more engaged with their work than with their audiences, but the “Disoriented Acrobat” who glances off into space does neither. True contentment in Kershisnik’s world isn’t found there, but in the afterlife, but this time, in “Le Rêve Bondé,” it’s being dreamed of by a man who lies abed, staring at it through gaping eyes. Probably the artist’s most disturbing vignette ever is a crowded scene of possibly racial turmoil titled “An Issue of Blood,” wherein one man points an accusing finger at another while a third cocks his own finger like a weapon. Kershisnik has never avoided intractable subjects, but here he seems to have taken one from the daily news. 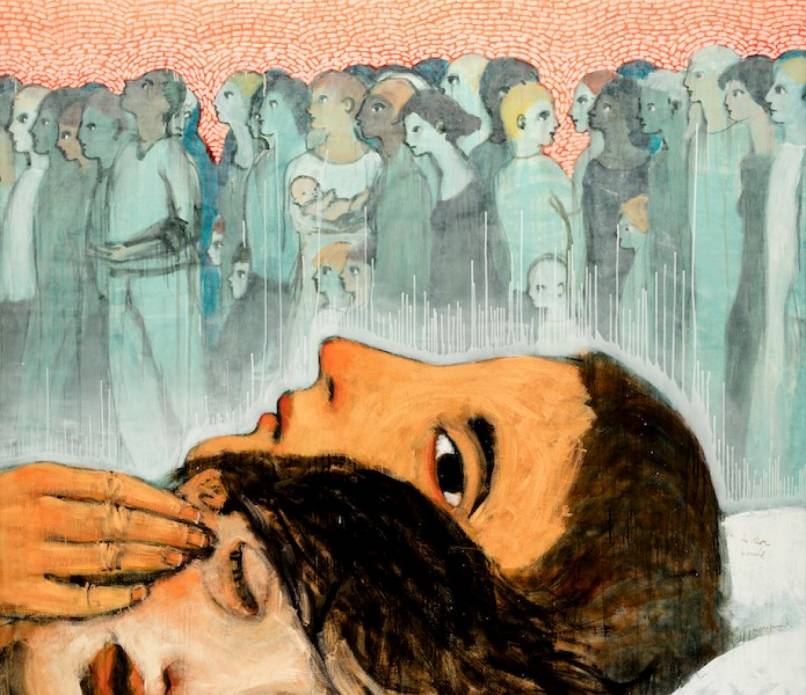 Underscoring these content revisions are new and expressive modifications in technique. Key to seeing these properly is Kershisnik’s preference for mixing colors less on the palette and more on the surface of the panel, applying successive layers of custom colors loosely enough that they blend without losing their identities. His light, often described as spiritual, emerges from this process, as does the result that the spaces it illuminates do not feel empty, even though they contain only the necessary objects. Viewers were also reassured by the meticulous way he filled in each part, painting right up to the black lines that marked the boundaries within which his figures appeared, making the painting feel complete and finished.

But walk through the gallery today and the feeling is different. He’s always painted quickly, but here the brushwork looks rushed, as if he feared he might not have time to finish. The rough textures that showed up in September at David Ericson Fine Art are even more apparent here. Color shifts, whether subtle or bold, have not been blended as they were in the past, so one color lies visibly atop another. While this movement toward impasto is the more apparent overall, it is not the most meaningful. Put simply, the actual presence and effort of painting has come to the fore through the employment of deliberate drips and visible brush work. Together, these effects call attention to the fact that these are the result of one man’s labor, which is one of the goals of modernism in art, though it may not be Kershisnik’s point. Someone who has dismissed abstraction so decisively would seem to have little to gain from arbitrarily giving up any of his illusion’s powers.

So here’s a thought. Even as the consolations of religion have become more important, more necessary for believers, they are less effective in dealing with not just the pandemic, but effects of climate change such as drought, flood, and fire. Our nation is fracturing along class and ethical lines, just as these layers of paint are separating. Religious art has always represented non-physical realms and the invisible, so perhaps Brian Kershisnik’s shift to other subjects and techniques represents a way of including more of the actual world in which he dwells, while lending it less mundane, more spiritual dimensions. In a sense, then, he’s another referee, less apologetic perhaps, but still hoping to fix what’s broken. 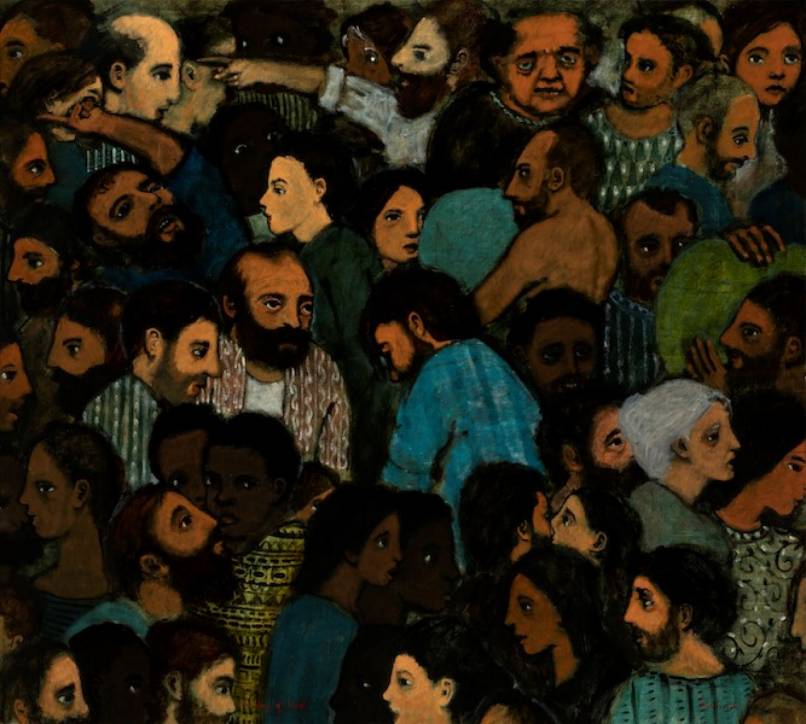