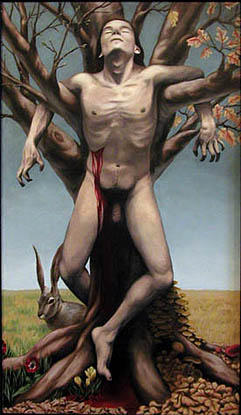 Aubry K. Andersen’s “He who Bleeds”
Originally this figure of a man bleeding while sprawled Christ-like on a tree was considered to be violent. But the gallery and viewers came to see it as a symbol of the woundedness so many are feeling post 9/11. The figure’s blood flows down onto the ground renewing flowers, animals (particularly a rabbit) and perhaps the earth itself. As an art student Audbry says she “explores the various cultures that have the myths of the sacrificed savior. So I put the rabbit in this picture because it is a symbol of the ancient goddess, pre Christianity. I marveled at how we made an Easter bunny out of that symbol, one philosophy cartooning another. After 9/11, I turned toward more skepticism about religion.”
And the dogma wars rage.

Fables Fine Arts had just been open a few months when State Sen. Ron Allen, a budding photographer in his own right, came into the gallery. As Ron perused the current exhibit, he brought it to the attention of Lynne Van Tress, gallery director, that many of the nudes on display could get the gallery into trouble under the current State law. One of the rare Democrats in the state legislature, Allen had been the sole “nay” vote against spending the taxpayers? money on the establishment of the Porn Czar office (Ron felt that clarifying pornography and protection of minors issues could be handled by lawyers within the Attorney General’s office). Allen told us that Fables could be in trouble if it didn’t work within the law. As a new business we didn’t need trouble.

Fortunately, at the time of Sen. Allen’s visit, the State law was being revised. A copy of the law was faxed over to the gallery and distributed to staff and friends. Yikes! We not only learned about the law and our liabilities but were introduced to new vocabulary words too, like “turgid.” We found many ways to use that word.

Fables owner Steve Teuscher’s conviction has always been that art offers a viable means of making public statements about things that concern the whole community. Steve has always felt that good art asks questions of the viewer. Besides creating beauty, the artist has an obligation to explore familiar images and emotional responses to the world around them. It is that exploration that is inherent in running a gallery.

As a culture, we have countless issues regarding the use and abuse of the human form currently in our face: the Taliban suppression of people, especially women, pornography as the biggest business and export of the United States (hey, it use to be war), the rape of an American woman every six seconds, the high rate of incest within our own state. It can be overwhelming. Fables saw an opportunity to stimulate dialogue and be of service to our community by helping people remember the grace, diversity and mystery inherent in living in and among the human form.

As the “Celebrating the Human Form” show was being developed at Fables, and various parties on the “inception conception committee” were voicing their ideas and concerns, we became the microcosm of the culture. The show brought up everyone’s issues from abuse, to sexual objectifications, shame, views on sexual orientation, pornography vs erotica (what is the difference?), longings, sexual orientations, styles and tolerance. Many a lively and animated discussion occurred between the group creating and marketing the show. This carried over into powerful responses from visitors to the gallery, as the show was being developed and erected. Yes, art as provocateur and healing agent — art therapy in action. We lived it. 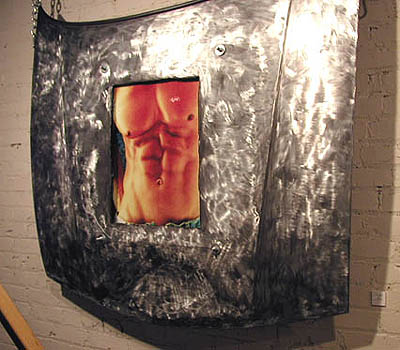 Mind Food is what Scott Green hopes he is offering with his work. He piece “V-6” shows a male torso on the hood of car. Scott feels that “female form has been exploited but the male form hasn’t been. We need to catch up with the 4th century when classic art celebrated the human form both male and female. It has become a homophobic thing, insecurity issue with men, to sculpt or paint another man. We are letting our fears and insecurities dominate. Form is more than about sex. My intent is to get you to think, feel, pull something our of you as you respond to the human body.”

When Fables first began receiving work for the show, the proliferation of the usual representation of the female form in all her perfect beauty dominated the entrees. But as art came in, the issue evolved and the discussions deepened. Do only the beautiful, the fit, and the young want love and are desirable? Are they the only ones to be celebrated? What about pieces showing older people? How about the overweight and out of shape, the clothed and innocent? What about people in pain, people transcending, people connecting with one another, people celebrating living? What about them?

Artists have always been drawn to explore various representations of the human figure. Often, a muse is the inspiration or enticement into the realms of expression. The feminine form is the usual symbol of the muse, as the openness of feminine form has always called man away from his intellectual pursuits; ask him to be present with her by enticing him into his body, to release him into his heart and soul, to open into love. Responding to the call of a muse was always an opportunity to loose his fear-driven mind and break his heart wide open into the many facets of love lived. Well, today there are many new forms, genders and orientations of the muse. Courageously, Fables was willing to offer them. Besides, good art can move you out of the mundane and into the possible.

On June 21 it was show time, the grand opening of the exhibit. The gallery marketing had garnered good press exposure and enthusiastic invitations to one and all, which resulted in over 700 people enjoying the art and exquisite cuisine. The City let us have sidewalk tables and musicians, a spot light of Warren Archer’s Ring Man sculpture projected on 3 story building across the way and elegant belly dancers (great human form). We offered beauty, possibilities and we pushed the dialogue of our times. It was a great party!!!

Through it all, we came to know we are all one. We all want love, connection, we all hurt and bleed, we all long for love and wonder, we all express life in unique and various ways. We’ve all been issued a body, we’ve all got one, and living in it is wild and wondrous, terrifying and precious. We ARE the Celebration of the Human Form.

The “Celebrating the Human Form” exhibit is open until July 24th. We’re hoping you have a refreshing curiosity about the myriad aspects of our common connection, the human form. Celebrating the human form gives us an opportunity to recognize and learn the transforming nature of the physical presentation of our beings and how to direct our awareness into the ultimate freedom of acceptance, understanding and connection to one another. Creating and sharing art can be the ultimate gift of recognizing and appreciating our common experience as human beings. Because we Are All One.

Susann Spencer has degrees in Communication Arts and Health Education. She markets various small businesses, teaches resiliency training, yoga and meditation for the western lifestyle, and designs, paints and writes. Helping to market “Celebrating the Human Form” was her spring vacation project.