The artist’s eye is revered as if it were a sacred object, a visionary orb that sees all, externally and internally. Rembrandt saw the soul of the sitter as well as the form. For many artists — good artists — this tool bridging the object and the subject goes beyond physicality. Meaning is the holy grail of art and great artists must use their imaginative prowess to greater effect, to look deeper, to see more sensitively. This, paradoxically, is more so the case if the artist lacks this necessary visual tool. Legally blind and visually-impaired artists deconstruct all parameters of art-making. Four such artists are featured in the current exhibition at the Salt Lake Art Center: Blindsight: A New Perspective on Painting. This is a highly probing exhibition, opening the door to penetrating questions on art-making, art viewing, aesthetics and the nature of art.

One is struck with a sense of respect for the four men represented in this exhibition. Like Goya or Beethoven, they are remarkable for their courage and for their venerable bodies of work. The examples of all four displayed seem to rely heavily on the mind’s eye, revealing a psychological vision emanating from their canvases.

John Bramblitt has been legally blind since the age of 19, and he also suffers from a related hearing loss. He is “functionally blind,” meaning he can differentiate only between sunlight and darkness. Now 37, Bramblitt has developed a methodology that frees him to go forward, to progress as an artist. Remarkably he renders canvases that not only are tonally balanced but also filled with boldly rendered colors. He does create canvases in black and white, but “Perceptions # 2 (Angry Baby),” uses a broad color palette. His subjects are composed of contoured sections of hue. Remarkably, to achieve his desired color effect, Bramblitt has learned to differentiate between the textures of varying oil pigments and applies them accordingly.

Bramblitt does not allow his disability to interrupt his work and goes deeper, transcending the limit which his disability imposes upon him. The majority of his works on display are representations of the sitters’ eyes. It is understandable that Bramblitt would use the eye as his subject as it is a factor which effects every waking moment of his life. Beyond his enjoyable presentation, which is stimulating and capricious, Bramblitt manages to capture much of the nature of the subject of his paintings. Like the best of portraitists, Bramblitt goes beyond the surface of the canvas to a more metaphysical state where nuances of emotion and character are conveyed. 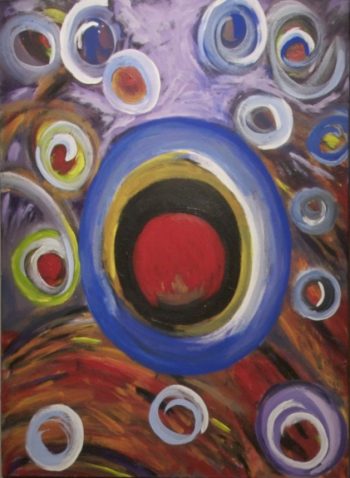 “The vivid colors in his paintings are inspired by inner visions rather than his true sight,” says the Art Center verbiage about George Mendoza, whose works are inspired by the post- impressionists for whom a primary focus was color and its applications. Mendoza was diagnosed with a hereditary condition which impaired his vision with a large red spot central to his sight and blurred peripheral vision. After his work with disabled students at the University of New Mexico, he retired in 1993 and devoted himself to his passion to paint. Not being deterred by his disability, Mendoza moved beyond the literal toward the more contemplative.

“Blindspot,” bears the type of sonority of color that Kandinsky would have used in his earlier works. A harmonious melody of circular abstractions plays itself before our eyes as if Mendoza were creating a symphony of color. More than purely representational, this abstract composition is fluid with acute vibrancy, opening a channel to what Mendoza might have experienced while creating this canvas. Again, we see the artist sublimating his disability, using unconventional ways of seeing to convey meanings which the viewer is allowed to explore. The piece is actualized as a fine work of art for its own sake and again, one is humbled by Mendoza’s bravery. Here is a testimony to the integrity of art as something not merely to be read but to be felt, contemplated and experienced.

Wonderfully lavish, sensual, emotive and intense are works by Eric C. Peterson. The artist lost his sight at age 6, and it was the encouragement he received from his father, an artist himself, that spurred him to express and probe his inner self and being. Luckily he did just this. Now at age 44, Peterson’s works are on par with great abstractionists, revealing tempests of thought, feeling and intellect into a product into which the viewers’ engagement is only superceded by the artist’s passion. These works are highly cerebral yet manifest great emotion. 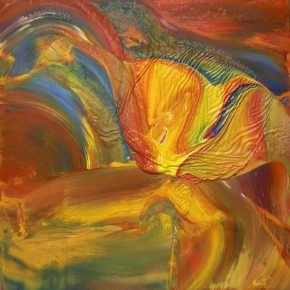 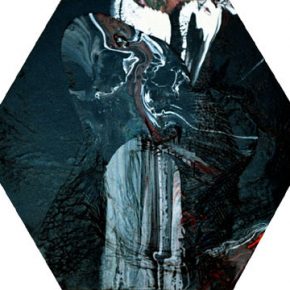 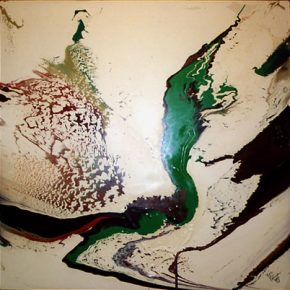 To great effect is the contrast between two works: “My Name is Tova,” and “Winter Solstice.” What greater poignancy in pigment could there be from an artist who knows too well the difference between light and dark. However, color is not absent in these pieces and a lucidity is gleaned which is born from the mind of the artist. Once again we find ourselves in an interplay with art born from an artist with a profound vision whose meaning for the viewer is only increased by the ability to transcend the physicality of an impairment and to use more fully the creative depths of his humanity. Again we find work on its own terms, not sentimentalized, but true and explicit. 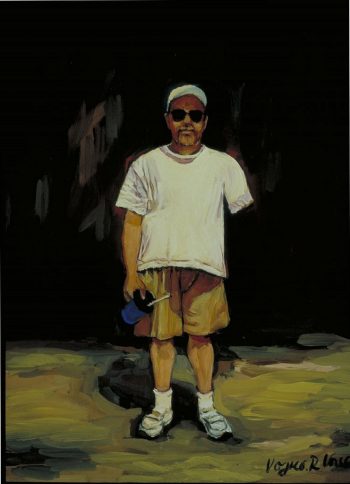 Unlike the artists already mentioned whose visual impairments were of natural causes, Vojko Rizvanovic, a Salt Lake City resident, became visually impaired due to his involvement in the conflict that ravished his homeland — Yugoslavia. Rizvanovic not only paints with an impairment but paints the impaired. His “Wade No. 3,” is a depiction of someone like Rizvanovic with a disability, here not visually impaired but an amputee, ostensibly from the war of his homeland, but the viewer cannot be sure. The work is rendered well and one marvels at the possibility of such accurate representation emanating from someone who has lost the majority of his sight.

One sees from many perspectives the marvel of humanity in Rizvanovic’s own struggle, the loss of his homeland, the loss of his sight, his valiance in continuing his art, and his compassion for others who are disabled. Again, we have before our gaze the work of a significant artist whose work speaks for itself, whose integrity is intact as fine art and whose empathy for others’ impairments can come only from one himself impaired. The possibility of Rizvanovic’s work is inspiring — his vision and selflessness even more so.

As one contemplates fundamental faculties of art- seeing, looking, observing — such essentials are utterly deconstructed in the impressive works of four artists who challenge the notion of the centrifugal force of art — the eye. A touchtone to our post-modern culture — and these artists who are avant-garde precipitators of this — is the mere fact that the reality of art is much more than the visually stimulated. Art involves more than this one faculty but a multiplicity of physical, spiritual, emotional and cognitive faculties that when articulated in various ways ignite infinite products with infinite meanings and infinite responses. These four avant-garde artists demonstrate with their significant bodies of work, stripped bare of artifice, artistic truth. 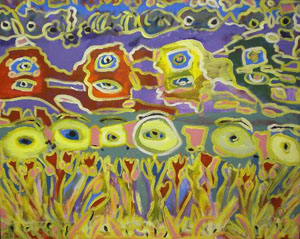 Blindsight continues at the Salt Lake Art Center Street Level Gallery through May 23, 2009.