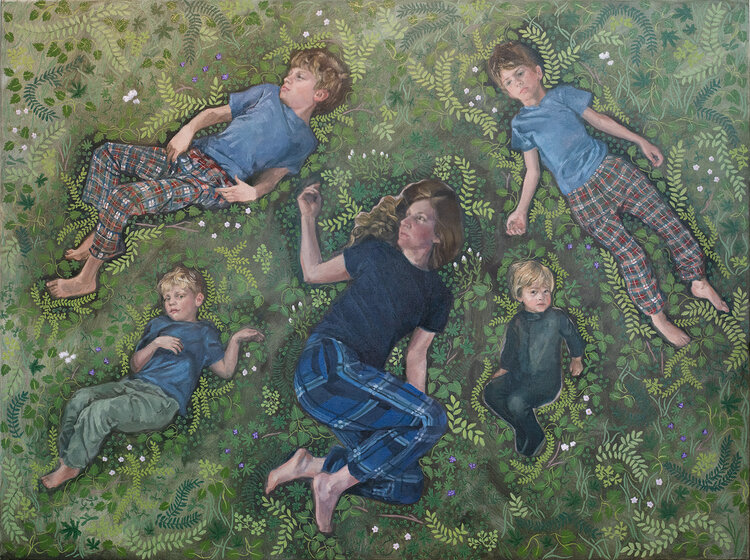 Brooke Bowen, “Quarantine with Children, Our Self-Portrait,” 30 x 40 in.

Throughout the Covid pandemic, public conversation made much of the experience of isolation. Recent art exhibits, several reviewed on this site, included interpretations of solitude and of its consequences. Still, for such a commonplace source of suffering, it didn’t seem all that well illustrated — perhaps because it was, by its nature, inaccessible. That said, insight comes from Brooke Bowen and Mya Cluff, two artists who experienced family isolation from within it, and whose Pandemic Motherhood opened last Friday at Bountiful-Davis Art Center. In addition to their personally revealing art works, their extraordinarily lucid statement relates how:

Artists who were also primary caregivers of their children found their experiences to be unkempt, complicated, and multifaceted. For many of them it was like floating in the ocean, constantly oscillating up and down, with no clear direction and constantly going further away from where one wants to go. There were moments when the seemingly simple relationships a parent expects with their children shifted and blurred as the time (was lacking) for an artist-parent to find oneself. The ephemeral nature of each moment seemed dreamlike in the beginning, but left only chaos and murk as time continued.

What they may have experienced as “chaos and murk” became far clearer in the ways that they chose to recollect and visually represent salient features of the last two years of their lives. It was their intention before the pandemic struck to exhibit together, and remarkably, despite the fact that they live in separate states, they were able to keep to their plan. Having two artists show together, one who is primarily a painter and illustrator, the other a sculptor and ceramicist, multiplies the impact of their diverse expressions.

Utah’s Brooke Bowen is inspired by the art of the early Modern period, also called the High Gothic, when secular art began to appear alongside medieval religious art. The imagery of that time, which reappeared among the Pre-Raphaelites of the Victorian era, gives her a well-developed and familiar decorative vocabulary to work with, which she makes novel use of in images that deploy her husband and four sons as models. Specifically, in what is arguably her centerpiece from that time, “Quarantine With Children, Our Self Portrait,” she uses lushly-illustrated foliage to represent both the shared predicament of a mother and her children, but also how the reality of confinement made their closeness as much a burden as a salvation. At first, the cosiness of their pajamas and the luxuriousness of the foliage suggest halcyon times, but their postures finally argue for something different. None of them connect, and in fact the mother, who appears elsewhere with her first child clinging to her, has her gesture towards him here met with indifference. Even the greenery, so inviting on first glance, on further contemplation suggests individual imprisonment. But the scene refuses to settle into either one mood or the other. In fact, it captures the knife-like ambivalence that was a primary characteristic of quarantine. 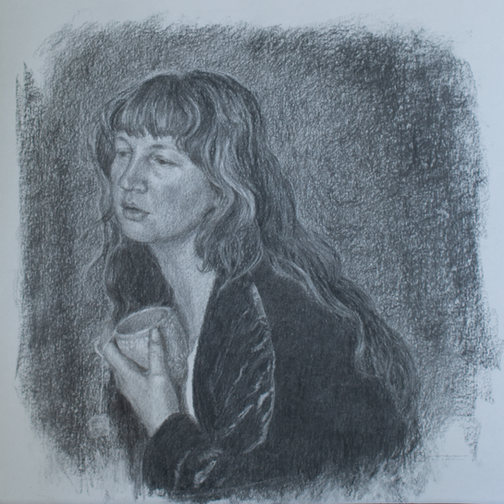 Bowen excels at this sort of doubling down. Her self-portrait, “Two Brookes,” so successfully differentiates two ages of life that at first it may be taken for a depiction of sisters or close friends — which in a sense it is. Viewers should be able to discern a host of differences produced by the implied events that are encoded, in part, in those changes. The hair in the elder figure reveals both less effort to make an impression and yet, because at the same time it is a product of increased self-confidence, is more likely to make one. The same goes for the clothing and accessories, like the wristwatch and the gardening shears. An energy flows like electricity from body to body, back to front, through gestures that speak of time passing and promises delivered on.

There’s a difference between illustrating a point and demonstrating it. Every one of these works demonstrates a strong, competent woman who insists on telling the truth, even when it’s uncomfortable or potentially unpopular. For example, in “Blessings and Burdens,” the same foliage that supported but separated the mother and her four sons serves a different purpose. Here it indicates that the four men whose legs seem almost to trod on her are only in her head, even as they are decisively on her mind. In a series done in different media, viewers witness her personal distress at a too-common event: “The Covid Test,” followed by “Sick With Covid.” These are charcoal drawings, made perhaps deliberately from a form of ash. Her grand summation comes in color, and tinged with a literary analogue: “The Curse of Briar Rose” fatally connects the isolation and fatigue of Covid with the mortality no one fully escaped. In order to accurately paint her crystal casket, Bowen had one made large enough for her to actually lie in. While her self-portrait argues she is asleep rather than dead, it does nothing to dispel the combination of exhaustion, close confinement, and escape that make up such a large part of the Covid story. 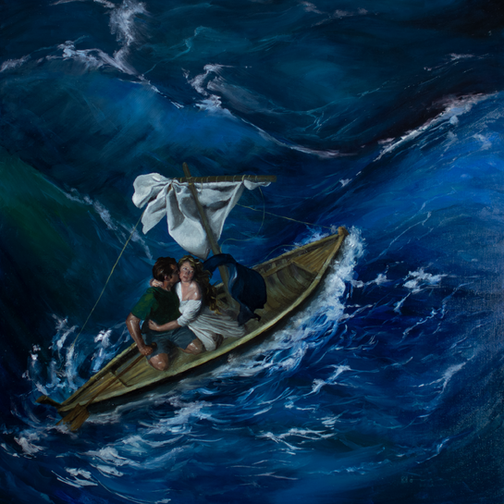 But what about when demonstration isn’t enough? When an artist needs to make a statement, and make it unmistakably, it calls for something more. In “Safety and Security,” Brooke Bowen uses the classic techniques of the great Romantic painters to celebrate her indispensable companion, on whose steadfast courage she relies as much as her own. In a storm out of a nightmare, yet in a time when such storms are becoming common events, and which is well chosen to represent a health threat that is the result of a degraded environment, she acknowledges her husband, the father of her four sons, as the hero of the story she illustrates.

Sculptor and ceramicist Mya Cluff now lives in Montana, though she and Bowen maintain their friendship on both professional and personal levels. For her part, Cluff points to a trio of major women artists as her influences. She notes in particular “the ephemerality of Kiki Smith, the emotion of Kathe Kollowitz, and the figurative quality of Christina Cordova,” all of which sound like worthy goals and standards for someone who works primarily in clay: in what is, after all, a flexible medium but one with its own strong, even headstrong character. That she evokes the characteristics of other materials from it isn’t a unique achievement, but it is an essential one. For instance, it’s hard to imagine clay being the ideal material with which to express cabin fever, the frustrated and even agitated state of so many of the Covid-confined and even quarantined. Yet in her triptych, “Walking the Walls,” the meticulously-rendered feet-of-clay make nervous circles that become increasingly so under observation, first climbing the wall, then crossing it, descending, and returning to start again. 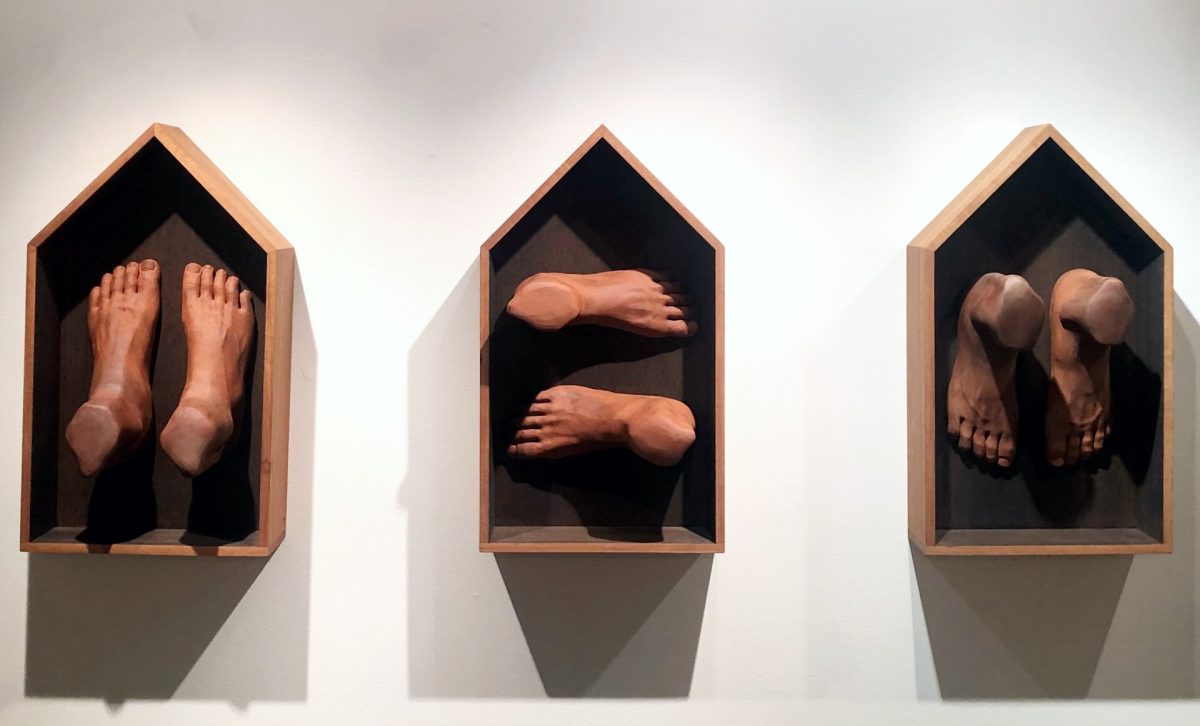 Rather than use her two children as visual models, Cluff involves them in her art at the stage of conception and design, making the dynamic less apparent. Consequently, houses, front doors complete with knobs, and hands feature large in this project. “To Touch and Be Touched” is a tour de force, a wreath made entirely of hands and forearms that wrap around and embrace each other, the entirety a night sky-blue picked out with gold planets and stars. The four houses of “Under Cover” are each composed of hands like so many shingles, each shielding the next one below it. In “Building Blocks,” her most sophisticated and elusive objects, homes are ornamented with parts of human skeletons. Here the analogy between bones as parts, structural components of a body, and houses as essentially structures that contain the members of a family, can be read by viewers on their own choice of levels: family, yes, but also individual, community, and beyond. 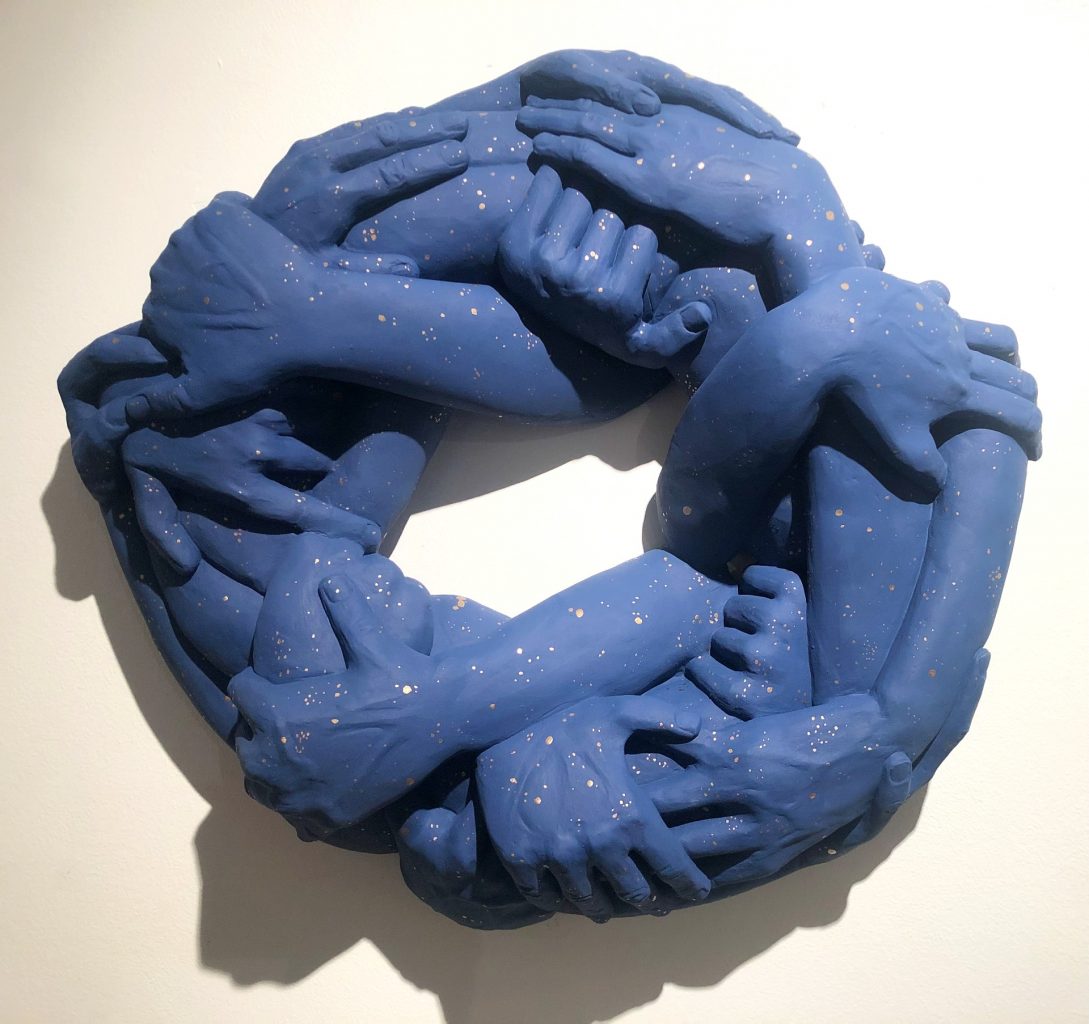 The closest Cluff comes in this exhibition to portraying her kids are a pair of “Worry Stones,” a sculpted child’s hand and foot, each of which sports a large worn spot. Here she marries the two meanings of “worry:” at once “to allow one’s mind to dwell on” or “to gnaw at and chase after” — either way, continuously. That the objects of her concern bear the evidence of her plight might be said to be both poetic and aesthetically just. That said, she doesn’t limit herself to partial figures all the time. Two challengingly posed figures, equally remarkable as portraits, fulfill the promise of all those hands and feet. “Home Body I” is a sitting figure, while “Home Body II” strikes an even more sophisticated pose, lying on her side with her torso supported by her arms. Both undeniablly convey the sense of sustaining a burden, which is represented by drawings her children made of houses and their doors, with knobs. Extending mostly over their backs, these images convey being loaded with the cognitive and emotional concerns of one forced not just to remain in, but to dwell as well on the fate of the homestead.

Both these artists have set out to discover, and have found, new metaphors for an experience that, while it was new in its dimensions, also contained more familiar if lesser traumas that they could incorporate into their subject matter. The title of an influential book of literary criticism comes to mind: Martin Amis’s “The War Against Cliché.” If the pandemic has done nothing more positive, it has given its victims and survivors a few new descriptive perspectives on their lived experiences. In the case of Brooke Bowen and Mya Cluff, they are surely not just more clichés, but are clearly original expressions. 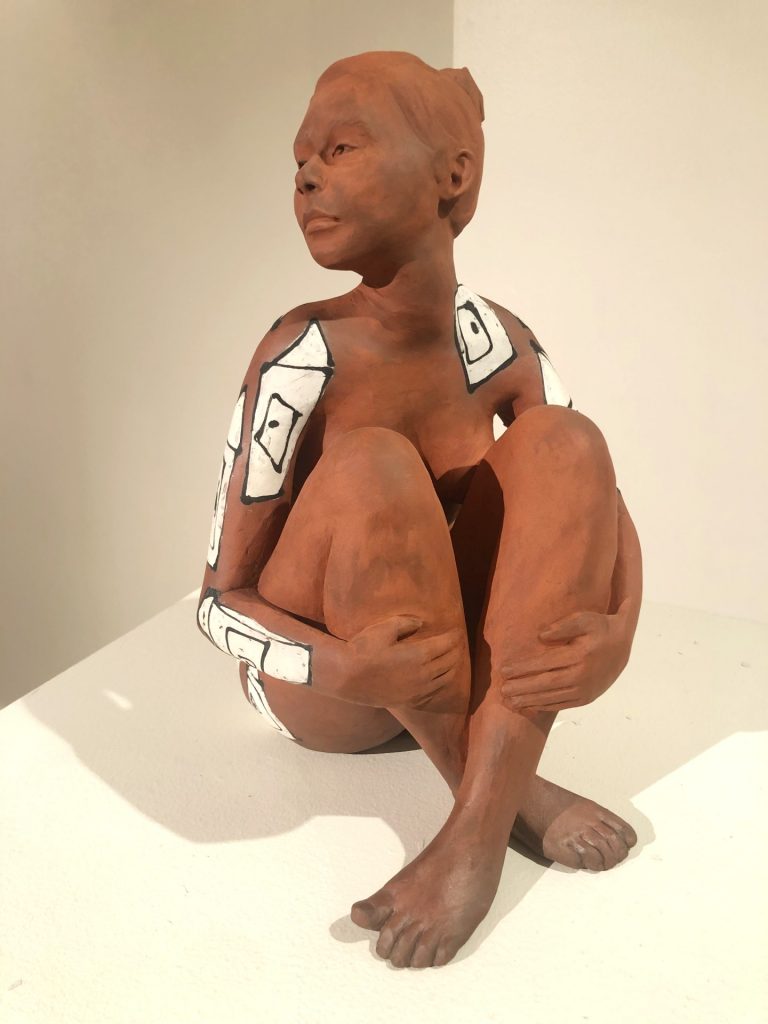