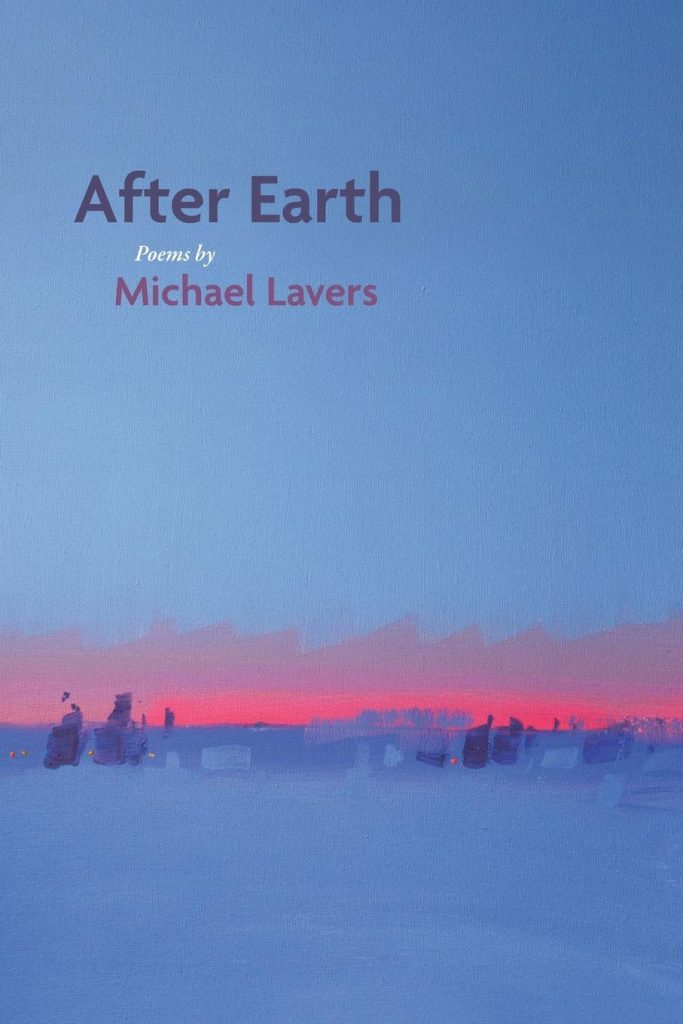 Anyone who’s seen the play or film Amadeus will remember the scene where Mozart has debuted his new opera for Emperor Joseph and his palace gang. The emperor tells Mozart (I’m paraphrasing) that it was a good effort, and showed promise and talent, but that it had — turning to Orsini-Rosenberg for help—how shall one say? . . . too many notes. The scene is, of course, ridiculous and meant to help cement the audience’s identification with Mozart, but I suspect some readers of Michael Lavers’ collection After Earth might react similarly. They’ll encounter the true and syncopated meter; all the end rhymes, slant rhymes, and internal rhymes; all the attention to craftsmanship and musicality, and think to themselves, “Okay, but that’s too many notes.”

If that’s not you, keep reading. My guess is that you’ll really like After Earth.

Here’s a good one to spotlight as a test. It’s the book’s third poem,“On Water, in Childhood,” and it’s 28 lines of blank verse divided into two — just two — sentences. This is the first:

How it would fall

and fill, and freeze and flow, or shimmer

or surround or slake; and how it heaved,

collapsed, cascaded, how it blazed, carving

the cold and high-dunned beaches of my boyhood,

how it breathed, becoming less than air,

as a mirror, moving, still, the way

it slid and stirred beneath my uncle’s boat,

alive and writhing as it buoyed us,

the whitecaps breaking on the sandstone bluffs,

the sudden fords, peninsulas, and shallows,

and the chambered cave.

Lavers is doing all the work here so that readers can float along on the imagery and meaning, but it’s work. By my count he’s using 27 alliterations, 20 instances of assonance, slant-rhyme pairs such as “fall / fill” and “fell / still,” and even a sly end rhyme in disguise: “air / transparent” [my emphasis]. All in one long grammatical tracking shot.

The rest of his 38 poems are constructed similarly. Probably my own favorite, for example, opens with a hook that’s nearly a sonnet spoken by a persona voice, a good one, in a couple breaths; well, in three breaths — two long and one short:

“The Angel in Charge of Creating Earth

Who cares if more important worlds have been

assigned to those more skillful, who make crusts

that never crack, or plates too fixed to creep

or jostle or explode? Ours are the splendors

of the makeshift, of the good enough,

of cold May wind, wailing the barbed and riven,

coastlines ragged as a vulture’s wing,

of maggots and voles, a vast legion of catalysts

and scavengers the top worlds are deprived of,

worlds where the joins are tight, with skies

Believe your errors, what they lead you to.

After that hook, the poem gets even better:

Those patches we forgot to water?

Call them deserts, hide there all our

Or how about this, which would sound irrefutably true even if it weren’t being stated by a wicked-cool anti-hero of an angel?

What’s perfect is by definition free

of difference — but uncountable and great

are the variations of failure.

This poem is about “the accidents of beauty,” which is just one of the reasons why I like it, and I’m probably not alone. Readers, I think, prefer beautiful strangeness to the packaged kinds of beauty we’re always being sold.

Lavers isn’t selling anything, isn’t pushing. Rather, he’s taken notice of a lot and chosen to present it — to offer it — in this collection.

Offer what? The thoughts of Prospero, translations of lines from Dante and The Aeneid, an “Alberta Psalm,” frozen landscapes, the image of his 14-year-old self “tripping on [his] shadow like a new giraffe,” many dozens of flowers and weeds, angels more interesting than Milton’s angels, and plenty more, including what might be my new favorite enjambment of a line: “All kinds of things exist. Why shouldn’t we / be happier?”

That’s from the fifth and final section of the book, a single long poem titled “Works and Days.” I’d expected to find a question mark after the word “we”; as in, Since so many things exist, why shouldn’t we exist too? But that’s not what happens, and what does is a lot more interesting because it causes us to wonder this instead: Is existing enough? Shouldn’t there be some happiness to go along with it? Lavers seems to answer, “Maybe.” It depends on how you feel about a vision of life presented this way:

The end must be

darkness from the flooding sky.

Earth’s earth. The rest is silence[.]

That last bit, of course, is lifted from Hamlet, but I don’t suppose that anyone will mind. Literary awareness throughout is part of After Earth’s music, like one of the instruments in its orchestra, and now I’ve come full circle, which is good. It gives me a reason to let Lavers have the final word:

From the garden rose the sound of bees

that lurched and wobbled through the peonies.

We ate eggs and toast with milk that warmed

in minutes in the sun while fat drones swarmed

It was the sound the mind makes when it yields

to glutted blood. I didn’t understand,

until one smelled the syrup on your hand,

and in a gold-encrusted drunken strut,

smeared pollen from its mandibles and gut

along your wrist. That morning you had tied

your hair, and as you rose and ran inside,

it gently bounced, and loosed, and then unfurled.

If the next is better, I’ll still miss this world.

Rob Carney is the author of seven books of poems, most recently The Last Tiger Is Somewhere, co-written with Scott Poole (Unsolicited Press 2020), Facts and Figures (Hoot ’n’ Waddle 2020), and The Book of Sharks (Black Lawrence Press 2018), which won the 15 BYTES Book Award and was a finalist for the Washington State Book Award. His first collection of creative nonfiction, Accidental Gardens (Parndana, South Australia: Stormbird Press), is forthcoming next year. He is a Professor of English and Literature at UVU and lives in Salt Lake City.