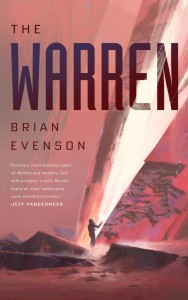 Human identity can be said to rely on two things: who we are, and what we do. This being and action gives humans purpose. As a Mormon boy growing up in Utah, the knowledge of my ancestors and faith told me who I was, and what I was supposed to do. Not only was I expected to carry on the fire of faith, passing it on to my own children and grandchildren as did those before me, I was tasked with genealogical research, identifying ancestors who had not received baptism and other saving ordinances, and then performing these ordinances on their behalf inside Mormon temples. To aid its members in this spiritual quest, the Mormon Church gathers genealogical records. Its growing collection includes over 3 billion pages of records protected deep inside the church vaults of Granite Mountain, up Little Cottonwood Canyon near Salt Lake City.

The preoccupation with lineage and its preservation shows up frequently in the work of Brian Evenson, a former, or arguably a “post,” Mormon and former embattled professor of English at Brigham Young University, from which, after a controversy over the content of his debut collection Altmann’s Tongue, resigned. His novel Immobility, for instance, details the journey of Josef Horkai, a fixer who has been awakened from suspended animation in the ruins of BYU and tasked with retrieving genetic material stored in a faraway vault reminiscent of the Granite Mountain Vault. In fact, the novel is prefaced by a quote from LDS Church leader Sidney Sperry detailing the “desire and goal of the Church to gather and preserve copies of the world’s genealogical information recorded through the ages … where they will be safe from the ravages of nature and the destructions of man.”

This identity, the sum of lineage and ancestral duty, appears in Evenson’s most recent work as well, the dark and subterranean The Warren. This novella, a spiritual, if not actual, sequel to Immobility, finds an unnamed narrator recording his last days deep inside the titular refuge, the decaying remnant of another age laid up against global apocalypse.

The narrator, whom we come to know as X, a short-lived, yellow-blooded humanoid, gives his lineage throughout the narrative. Before X, we learn, came Wollem, a name chosen for him by the pair who had come before him, Vigus and Vagus, who were in turn formed and named by another pair, Unnr and Uttr, preceded, by Tore and Ture. This lineage continues backward through the alphabet to the first, Aarskog, aka Aarskog-Scott, which, incidentally, is the name of a rare genetic disease characterized by skeletal abnormalities, and facial and genital deformations.

This bizarre family history seems to form the core of the narrator’s identity. Not only does he exist because of his ancestors, he is the repository of their memories and identities. Wollem, X’s pseudo-father, explains that the memories of their lineage have been placed within X due to the degrading hardware of the “monitor,” some sort of artificial intelligence. Wollem also explains that there was not enough “material” for Unnr and Uttr, his direct predecessors, to create a traditional pair of beings. They were forced to create just one being, Wollem, in order to make the material last longer. Wollem has used the last of the material to create X.

Regardless of the strangeness of this life cycle, the alphabetical sequence of names, the preservation of memories within the new being, the assistance of machinery to create these beings, the pattern is recognizable. The directive of all life is survival and reproduction. In fact, Wollem reveals to X that the purpose of their species is to create a new person and imbue him with knowledge and communication. When X begins to show sentience, Wollem says his purpose is complete and leaves in search of more material.

This directive, however, comes to fill X with existential dread. His raison d’etre is to survive, preserve the knowledge of his forebears, and then create another pair and imbue them with the knowledge he keeps when he has reached the end of his lifespan. However, there is no longer any material left for creation. Even with the aid of the monitor and “tablature,” it is impossible to create a new being. X’s purpose is undermined.

“It responded, Bipedal, an individual thought process enmeshed in a body, procreated through the fertilization of an ovum by a sperm and its subsequent development in a womb.” X responds that “only the first criterion is relevant,” revealing that X is bipedal, but not an individual thought process, nor the result of procreation.  The answer to X’s question about when a person last left the warren is contingent upon these conditions, but more importantly it establishes a definition of personhood.

Later in the novella, X comes into contact with Horak (perhaps a mutation of the name Horkai?), a being who possess all three of the monitor’s human criteria. The content of their last, violent conversation is further proof to X that he is not a person according to the standards of others.

This discovery of a discrepancy between X’s definition of personhood and the authority of the monitor and Horak begins to reveal the true nature of X and his kind. X seems to be some sort of sentient family history, preserving both names and genetic information in order to preserve them for one more generation. “What was I,” X reflects, “but a repository, a refuge for souls without bodies.” But his existence is ultimately purposeless without the ability to reproduce. At the discovery that he is the end of his species, and that due to no fault of his own it is impossible to prolong his species he is filled with hopelessness and dread. His very directive, the purpose of his creation, to preserve the names and memories of those inside him, can never be achieved.

What can be drawn from this bleak conclusion by the academic and celebrated author of both literary fiction and popular fiction (some of which is under the name of B.K. Evenson)? Is the novella a meditation on the purpose of life and disillusionment? Perhaps the reader is meant to contemplate the far-reaching implications of a culture that is capable of making long-lasting technology (nuclear weapons, pollutants, monuments and artificial intelligences) but is too spiritually immature to question or examine the implications of such technology.

As a former Mormon myself, I cannot resist finding the remnants of the faith I knew within Evenson’s work. While there is nothing on the surface of the novella to suggest a correlation to Mormon theology, beyond a few allusions to Immobility and its more explicit references to Utah and the LDS Church, it speaks to me of my own spiritual journey. Within X’s anxiety, I find the horror I felt at losing my faith, at the dread I felt when I looked upon the future and the past. And this is where the work reveals its genius. In spite of an utterly alien setting and characters, the novella is deeply human. The Warren captures the idealism of youth as well as the disillusionment of experience. It puts a mirror up to the human condition.

There does seem to be a glimmer of hope, however. Just as the loss of purpose and meaning sets in, we find X, the last of his species, most likely dying, doing a thing he was never taught. He makes a record by scratching charcoal on paper. In light of his own demise he sets out to document his life and the life of those stored inside of him. Because what can each of us do when confronted with life, its mysteries and broken systems, but write them down?

What is there to do but make what sense of them we can, and leave a record for those who may or may not come later? In spite of the bleakness of the novella’s conclusion, X’s resistance to ending his life without leaving some sort of record succeeds in creating a new purpose.