Humor and Hyperbole: Idealogue at the Utah Museum of Contemporary Art 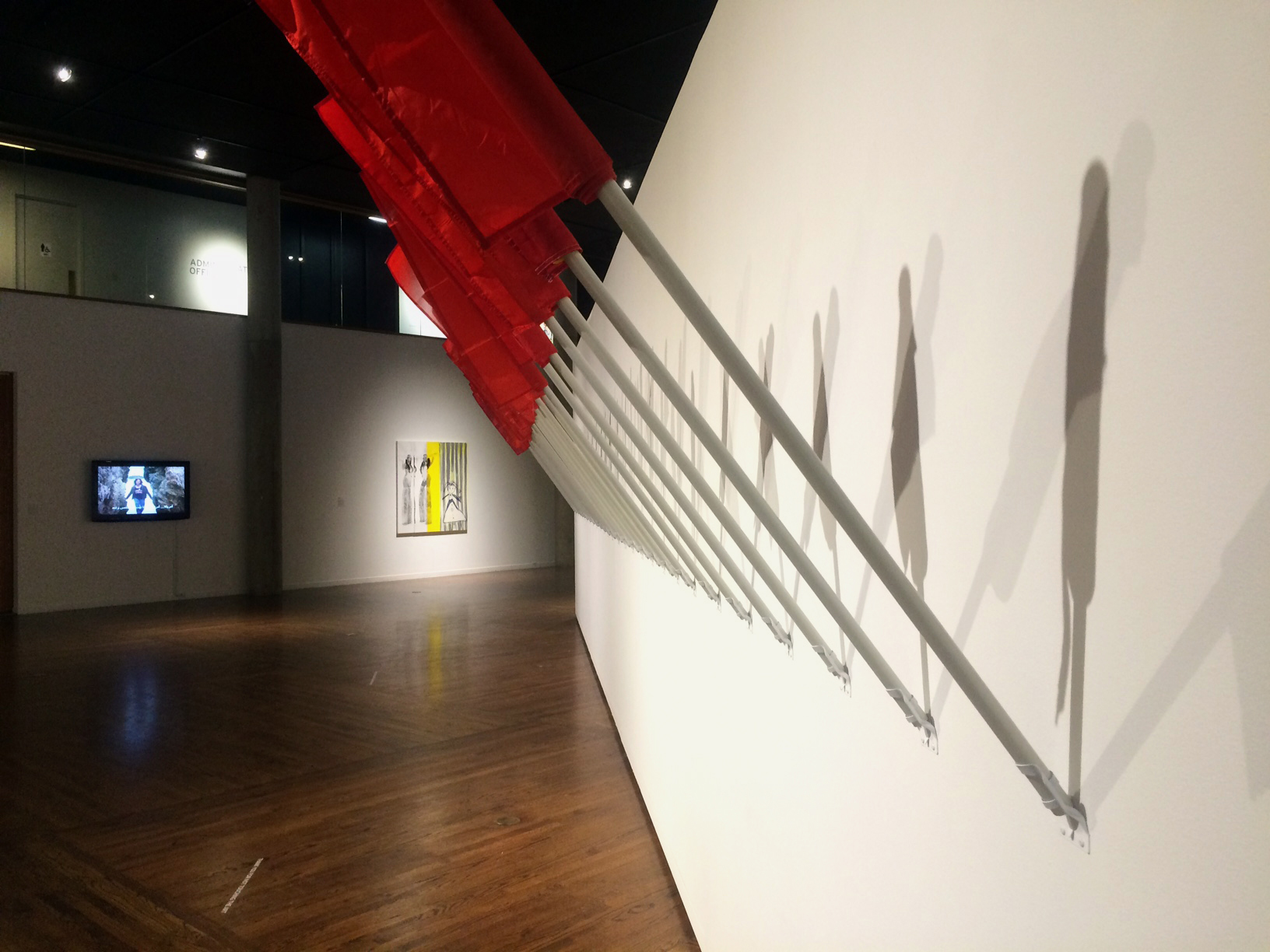 There’s a work in Ideologue you can’t avoid. It’s a music video whose soundtrack floods the Utah Museum of Contemporary Art’s (UMOCA) main hall, its saccharine lyrics following you from one room to the next, eating away at your skull like a cavity finding its way to a sensitive nerve. “America, we must carry on!” croons Dennis Madalone, his long dark hair parted down the middle and feathered back, a gold chain adorning his neck and a bandana tied around one leg of his ripped jeans (his fashion sense should place the stunt coordinator-turned-singer two or more decades in the past, but the video was actually recorded as a response to 9/11). In appropriating Madalone’s music video, Swiss artist Christoph Büchel has added Arabic subtitles, presumably an attempt to undermine the self-satisfied nature of the patriotic rock anthem; but it’s a strategy that seems gratuitous, for the video itself, with its heavy-handed sentimentality and questionable production values, is so bad one could be forgiven for thinking it was already, sans subtitles, a parody. It will make you laugh. Until you step away and realize you can’t get away from it.

UMOCA’S current exhibit features nine artists “who employ humor and hyperbole to address platforms of ideology.” It would be hard for any art exhibit to compete with the humor and hyperbole that seem to spring forth weekly in the current election cycle, where it’s frequently unclear if the person behind the rostrum is a candidate or performance artist; thankfully, this exhibit of international artists avoids the confrontation of the parochial and the strictly political, exploring broader issues and contexts that will outlast any one news cycle.

In Fayçal Baghriche’s “Envelopment,” a series of red flags arranged in a line jut out from one of the exhibit’s freestanding walls. The 27 standards belong to different nations but are furled so that only the last inches of material show, concealing the emblems’ layered political message and history as identifier of political entities and affiliations. What should be a multicolored parade of nations has been reduced to a uniform sea of red. The color choice might suggest the dream of a triumphant global communism, the specter of which still haunts conspiracy spinners fearful of a “new world order;” but such interpretations betray a specifically American bias and may not resonate with an Algerian artist working in France. And the furled form of the flags hints at a less threatening, more benign interpretation, the unifying color of furled flags perhaps suggesting a commonality masked by unfurled differences. The interpretative precariousness in this ambiguous work may say a lot about how ideologies and historical context inform our perceptions.

Larissa Sansour does something related though more specific in her piece “A Space Exodus,” where national emblems undermine the grand narratives of dominant countries to highlight the plight of neglected populations. With a soundtrack that evokes Kubrick’s “2001: A Space Odyssey,” and shot sequences that call to mind any number of big-production space-exploration movies—“Martian” being the most recent— she enacts a drama that subverts the traditional moon-landing narrative: the artist, wearing her country’s insignia, bounces across a lunar landscape to plant the Palestinian flag in the lunar soil. “One small step for a Palestinian,” she says, “one giant leap for mankind,” challenging Neil Armstrong’s famous line—spoken, after all, by a man claiming to act in behalf of humanity but who shortly after engaged in a symbolic act born from a long history of war and colonization: the planting of his nation’s standard. Mankind, in the form of superpowers like the United States and the former Soviet Union, may reach for the moon and beyond, Sansour suggests, with a poke in the ribs, but remains unable to solve the crisis of a small population located in a tiny portion of the earth’s landmass.

The subtext of colonialism in Sansour’s work becomes full-blown text—and image—in Dan Mills’ “Us Future States Atlas,” which presents the artist’s idiosyncratic vision of cartography in a world transformed by U.S. dominance. Freshly minted states like “New Albany” (Albania) and “Thermia” (Iceland) are superimposed on U.S. maps to show their relative size, and their landmass is separated into bright colors to demonstrate their respective worth and uses. The style of the pieces mimics traditional cartography (elsewhere, the individual mixed-media works have even been put together as an actual atlas, bound in faux leather) but the provisionary and subjective nature of the artist’s interpretation is suggested by his handwritten notes about the history, value and possible inclusion into the U.S. body politic of places like Iraq, South Korea and Singapore. The ongoing project began in 2003 and reflects the bellicose, regime-changing posturing of U.S. foreign policy in the dreadful naughts. While in hindsight it is easy to see how ineffective we were at such regime change, and how difficult it would actually be to incorporate foreign lands into our national tapestry, even that observation, like Mills’ work, misses an important aspect about American Imperialism in the 21st century: we’re not particularly interested in amassing new states. Just ask Puerto Rico. We’re like a billion-dollar rideshare company claiming to have only created a software platform, not an employee base—rather than take on the responsibilities that would follow from bringing other lands and people into the official fold, we’d much rather exploit them from a distance.

Many of the works in Idealogue are ironic or sardonic, not meant to make one laugh so much as smirk. One work that will make you laugh, when it doesn’t make you cringe, is Ivan Argote’s video piece “Two 50 Years Old White Males Having Emotions” (2013).  Standing in a darkened room and lit from overhead, two aging men embrace, their heads resting on each other’s shoulder, a hand patting the other’s back; as the camera pans round and round, a range of emotions, sometimes congruent sometimes colliding, is expressed by the men: at first the embrace seems a fraternal hug, full of comforting gestures, but as the camera moves around the pair it reveals one man crying while the other laughs, one pulling closer just as the other rolls his eyes and sighs. At one point, when one of the men stiffens and pulls away slightly, his nose and eyes squinting, his brow furrowed in disgust, one can’t help but wonder if his partner has just soured the air with a bodily function (or maybe one could help but wonder, but such are the immature trains of thought the current election cycle will impose on a viewer). These moments are good for a laugh. But they are deeply unsettling as well. This male intimacy, so uncommon to witness in our culture, is refreshing to see at first glance, but as it dissolves and distorts, as the inability of the two parties to communicate some form of sustained communion becomes evident, it imbues the piece with a sad undercurrent, both private and political.

The dissembling mask is a constant trope in the figure of the clown, his frown hidden beneath a painted smile, and appears as a central metaphor in the pieces by Kathryn Andrews. She works from historical images of hobos, clowns and migrant workers from the early 20th century, and using costumes, a stylist and older men as models, creates portraits that she silkscreens onto sheets of Plexiglas. Above these images she has collected a variety of found objects— political pins, candy wrappers, lottery tickets, pills—suggesting an oversaturated consumer culture. For the most part these re-created images are not so much reflections of the hobos and migrants of the Depression era, as the exhibition tombstones suggest, but caricatures of the same, related more to the hobo or clown character developed in films and variety shows after the Depression; they are, in other words, reproductions of another form of consumer product, mass entertainment. While Andrews’ portraits are some of the most striking works in the exhibit, their slickness and commercial “pop” run counter to any anti-consumerist message.

We are all clowns, without an audience, in the work of Basim Magdy. So he tells us in a text piece that begins “After much contemplation and debate, the clowns that run this degenerating society . . .” One of the troubles of text art is that enlarging the font doesn’t necessarily make a statement more interesting. It just takes up more room—in this case an entire wall. “The Future of Your Head,” a work by the same artist, projected with light bulbs against a two-way mirror, is more effective, both because of its visual presentation and by the pithiness of the text. Jeremy Deller’s textual work “Doctor David Kelly,” printed gray on black like a memorial wall, references a British scientist who, after sharing his doubts regarding Iraq’s WMD program and then being humiliated on national television, allegedly killed himself. It may be too foreign a reference to have an impact on Utah audiences, though, and the fact that a Republican candidate for the presidency now shares the doctor’s view, doesn’t make the reference more interesting because it’s ironic. It’s still tragic.

Like Dennis Madalone’s 9/11 video, ideology is something we can’t escape, it permeates the fabric of our lives, weaving its way into our thoughts and actions. We can embrace it, and revel in the pleasures of zealotry, or run from it, and be tripped up by our own blindness. Or, as these artists suggest, we can learn to laugh at it. 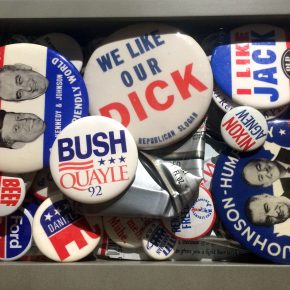 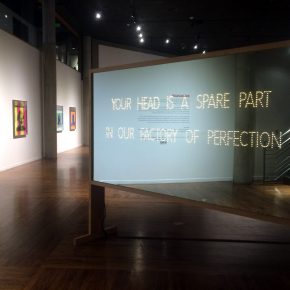 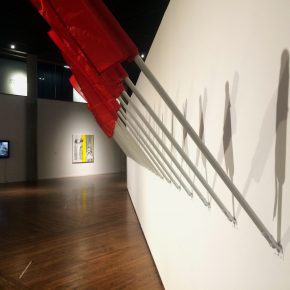 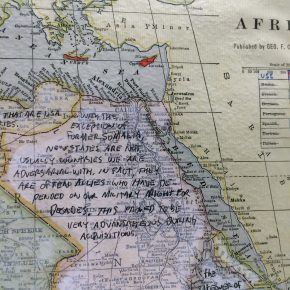 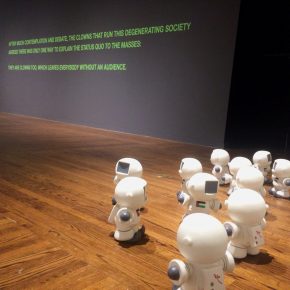 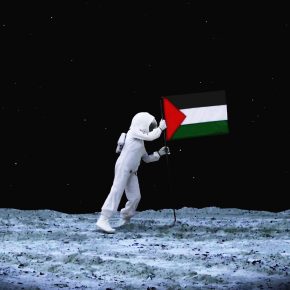